Matthew McConaughey and Anne Hathaway go to infinity and beyond in a twisty, dazzling, crazy-ambitious space opera 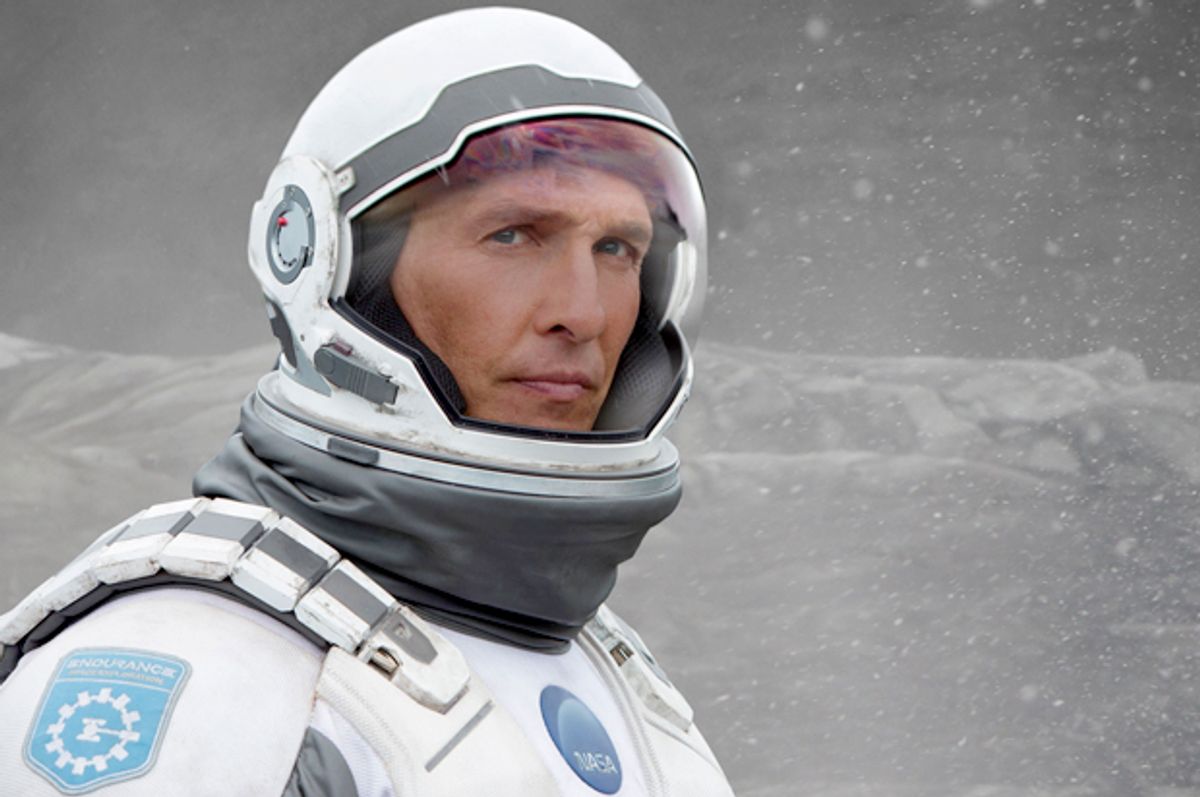 “Interstellar” is M. Night Shyamalan’s finest film. It blends the aching, yearning, Hallmark-flavored sentimentality, the melodramatic plot twists and the pseudo-profound philosophical reversals with some surprising nuggets of cutting-edge hard science and a view of the human future grounded in both realism and hope. It hits all the notes a Shyamalan fan could hope for: It’s about an all-American farm family in the Corn Belt struggling through hard times, it’s about a grand intergalactic adventure whose real subject is family and love, and it’s got numerous scenes of major movie stars trying to hold back the tears but not succeeding. Anne Hathaway sobs, Jessica Chastain sobs and Matthew McConaughey sobs. Hell, Matt Damon sobs buckets – and the fact that he’s even in this movie was a well-protected secret until the reviews started to hit. Those people do their crying at different and irreconcilable points on the space-time continuum; now we know how water got from place to place in the universe.

Yeah, I know: I dragged out that gag a bit too long, and Shyamalan had nothing to do with “Interstellar.” He'll be seeing it in a movie theater, like you and me. So this is the greatest Shyamalan movie ever made by someone else, or maybe it’s Christopher Nolan’s best impression of what a Shyamalan movie ought to be like. No doubt that sounds like a backhanded compliment, but I don’t entirely mean it that way. Whether you think “Interstellar” is Nolan’s big breakthrough to a new level of emotional populism or a sideways slide into mainstream glop is largely a function of your perspective on this talented illusionist and his entire career. Oh, and here’s the warning: I’m going to discuss some conceptual elements of “Interstellar” that some people may understand as spoilers, but I promise I won’t go beyond the barest plot synopsis.

Nolan’s core fans, if they’re honest with themselves, will feel conflicted about “Interstellar,” and some may feel subtly let down. This is a tremendous popcorn flick, loaded with thrills and chills, along with plenty of film-school references for those who wish to chase them. But the hard-edged technophilia and post-adolescent nihilism of the “Dark Knight” trilogy are dialed down almost to zero. This movie’s exciting, and sometimes moving, but I’m not sure how cool it is. There’s another obvious reference point, besides Shyamalan, in mainstream cinema: Jonathan Nolan, Christopher’s brother and co-writer, first developed this script in the mid-2000s as a project for Steven Spielberg, and the finished product carries the grand ambition, pop calculation and fatal hubris of a Spielbergian spectacle. (The Spielberg version of "Interstellar" would of course star Tom Cruise, and here and there you can feel McConaughey fending off that specter.) Has Christopher Nolan grown increasingly desperate to win that elusive Oscar, and made a decision to go for the heart rather than the brain? Maybe a little, but I’m not saying “Interstellar” is a cynical move. It’s more like trying out a new persona, that of “A-list Hollywood director” rather than “beloved cult genius.” It fits, or pretty close.

Let’s start with the big picture: “Interstellar,” which is sure to be one of the biggest box-office draws of the year and a probable Oscar nominee, is terrific roller-coaster entertainment, with some plot twists you’ll see a mile away and others that sneak up on you. Despite some awkward expository dialogue where people tell each other things they already know -- “Hey, remember when the rain stopped and the crops failed and we had to give up technology just to keep ourselves alive? ‘Member that?” – the Nolan brothers’ screenplay ingeniously unpacks a series of scientific and/or supernatural riddles that at first seem incompatible. There’s just enough quantum mechanics for physics geeks to admit that the film’s space-travel scenario is halfway or hypothetically plausible (physicist Kip Thorne served as a script consultant), and just enough deep-background deistic teleology for those who want to dream of a Grand Design.

After a leisurely earth-bound liftoff – maybe a bit too leisurely -- we visit wormholes, black holes, forbidding alien worlds and time-space paradoxes. As you’d expect, Nolan’s effects team does stunning, even superlative work, advancing classic images and tropes of science fiction into a new era. This is Nolan’s first film with cinematographer Hoyte Van Hoytema (of “Let the Right One In” and “Tinker Tailor Soldier Spy”), and the pictures have an appealing rawness, a notch or two more naturalistic than the perfect sheen delivered by longtime collaborator Wally Pfister, who shot every Nolan film from “Memento” to “The Dark Knight Rises.” Whether on Earth or in space, there’s a haunted, shadowy, slightly off-center quality to Van Hoytema’s frames, which conveys the highly relevant sense that some of the story is taking place off-screen, in realms or dimensions we don’t see.

At this point it’s almost a reflex action in sci-fi cinema to refer back to Stanley Kubrick’s “2001: A Space Odyssey” and Andrei Tarkovsky’s “Solaris,” those tragic-elegiac masterpieces of another age. I will leave it to dissertation authors of the future to figure out all the elements Nolan pilfers, reworks and recombines from those two films, but he is certainly playing a deeper game than random quotation. No doubt it’s too simplistic to say that Nolan is trying to push astronaut Dave Bowman’s transcendental journey in “2001” toward a more satisfying (and comprehensible) outcome, or to figure out who, what and where the mysterious Starchild cosmic-embryo thingummy might be. But that’s somewhere in the right analytical ballpark, as is the argument that he’s trying to render the symbolic homecoming in “Solaris” into an event in physical reality, rather than an imprecise metaphor for God or art or Russia or the Eternal Something. Whether those movies required a conceptual mashup/remake aimed at a 21st century mass audience is a more difficult question.

“Interstellar” begins in an odd, slow mode of apocalyptic lamentation, as if it were ending before it had started. This could be a clue to the Nolans’ Möbius-strip narrative structure, as are the documentary-style snippets that seem to be about the Dust Bowl of the 1930s. (On second viewing, a lot of that material will yield new information.) But in fact the onetime ace test pilot and engineer called Coop (McConaughey) is living amid some near-future Dust Bowl America, when nothing but corn will grow anymore (and less and less of that), and renegade Indian Air Force drones fly overhead, long severed from their terrestrial commanders. Of course Nolan knows he’s channeling all sorts of heartland-set farm-family movies, including “Field of Dreams” and Shyamalan’s “Signs.” But it’s highly unfortunate that the most recent, and strikingly similar, multiplex example is the Mark Wahlberg-led, robot-infested farmstead of Michael Bay’s “Transformers: Age of Extinction.”

While the mood of these early scenes is eloquent and elegant, you can’t help wondering how the hell this lugubrious tale about a nation and a planet skidding into the ecological Dumpster will send its protagonist into outer space. With a bang and a zoom, that’s how. Something or someone is sending the family messages by knocking books off the shelves and arranging dust on the floor; Coop’s daughter, Murph, played by Mackenzie Foy as a child and later by Chastain, says it’s a poltergeist. (Yes, this is a farm family where people are named Coop and Murph. No doubt Sarge, Bucky and Hawk are out in the fields.)

Without going into specifics, let’s just say that Coop and Murph discover that NASA still exists, despite officially having been defunded and, oh yeah, they need Coop to fly a spaceship through a newly discovered wormhole out near Jupiter, and thence into a distant galaxy in search of viable planets, since ours is toast. (As a bumper sticker you used to see in the Pacific Northwest puts it: “Earth First. We’ll log the other planets later.”) Coop is a widower, long a Hollywood device to raise the pathos level and the hero's swoon-worthiness, but also a fact that ought to make it extra unlikely he will bail out on his kids. But before you have time to say "What the hey?" Coop takes his protein pills, puts his helmet on and blasts into the movie’s second chapter, leaving his family (including his teenage son, played by Timothée Chalamet and later by Casey Affleck, and his aging father-in-law, a pleasurably laconic John Lithgow) behind on a dying planet with only a microscopic possibility – given the unknown nature of his destination and what we know about relativity and high-speed space travel – that he’ll ever see them again.

McConaughey holds the screen beautifully, fixing his iconic mug on the boundary of fate whether he’s driving an ancient Dodge pickup through Nebraskastan or piloting a deep-space probe toward mysterious planets a bit too close to a black hole’s event horizon. Obviously the space mission is what we came for, and that’s the best stuff in “Interstellar,” intense, suspenseful and heartbreaking. Coop is accompanied to infinity and beyond by a persnickety scientist named Amelia Brand (Hathaway), who may have her own agenda, a pair of more disposable crew members played by Wes Bentley and David Gyasi, and a wisecracking robot named TARS, voiced by Bill Irwin, a completely idiotic and counter-logical idea that totally works. (In addition to those more serious movies I mentioned, there’s just a little bit of the campy ‘60s TV series “Lost in Space” at work in “Interstellar.”)

As Coop and his crew travel from one mind-blowing otherworldly scenario to another, looking for bread crumb trails suggesting that previous voyagers have found a new home for the human race, they’re acutely aware that time is passing at a different rate back on Earth, and is literally running out. Even if Coop comes back alive, his kids are likely to be long dead of old age – and his grandkids are likely to suffocate in a poisoned atmosphere. Here’s where we start getting to my litany of objections to “Interstellar,” which begin with the fact that every time Nolan encounters an enormous hole in storytelling logic – or scientific logic, or even theological logic, because there is such a thing – he blasts through it at light-speed, hoping we’ll be dazzled into not noticing.

Nolan has said that he hopes the movie will encourage renewed public interest in space travel, which is now seen in most Western countries as an expensive and unnecessary luxury. I entirely support that goal; I think it’s a great historic mistake to hold science hostage to neoliberal economics, or to abandon it to autocratic regimes like Russia and China. But for all the philosophical nostrums and pop physics in “Interstellar,” Nolan waffles so much on the horrifying and ludicrous notion that we should abandon our planet and go find another one to rape that I honestly can’t tell you where he comes down, or even exactly how the movie ends. (I would also argue that the Nolans have grossly and irritatingly misread Dylan Thomas' famous villanelle “Do not go gentle into that good night,” which is about the unquenchable, unavoidable tragedy of the death of one individual, and not at all about the human species. But that’s become a pop-culture staple, and it’s pointless to complain.)

Then again, maybe the problem is that the Spielberg-Shyamalan mask of sentimental populism doesn’t entirely fit, and that Nolan can’t help playing a game of bait-and-switch with his audience. “Interstellar” is thrilling to watch across its moments but ultimately unmemorable; I feel it slipping away from me even now. It’s an almost convincing simulation of a great mainstream movie made by an entity from another dimension, who sees our flaws with a mixture of amusement and dim, theoretical sympathy, but who finally doesn’t care whether we save our planet or not, whether we live in reality or delusion, whether we rage against the dying of the light or suck the tailpipe of our self-constructed engine of doom and die.