Lea DeLaria gets in a misguided subway fight 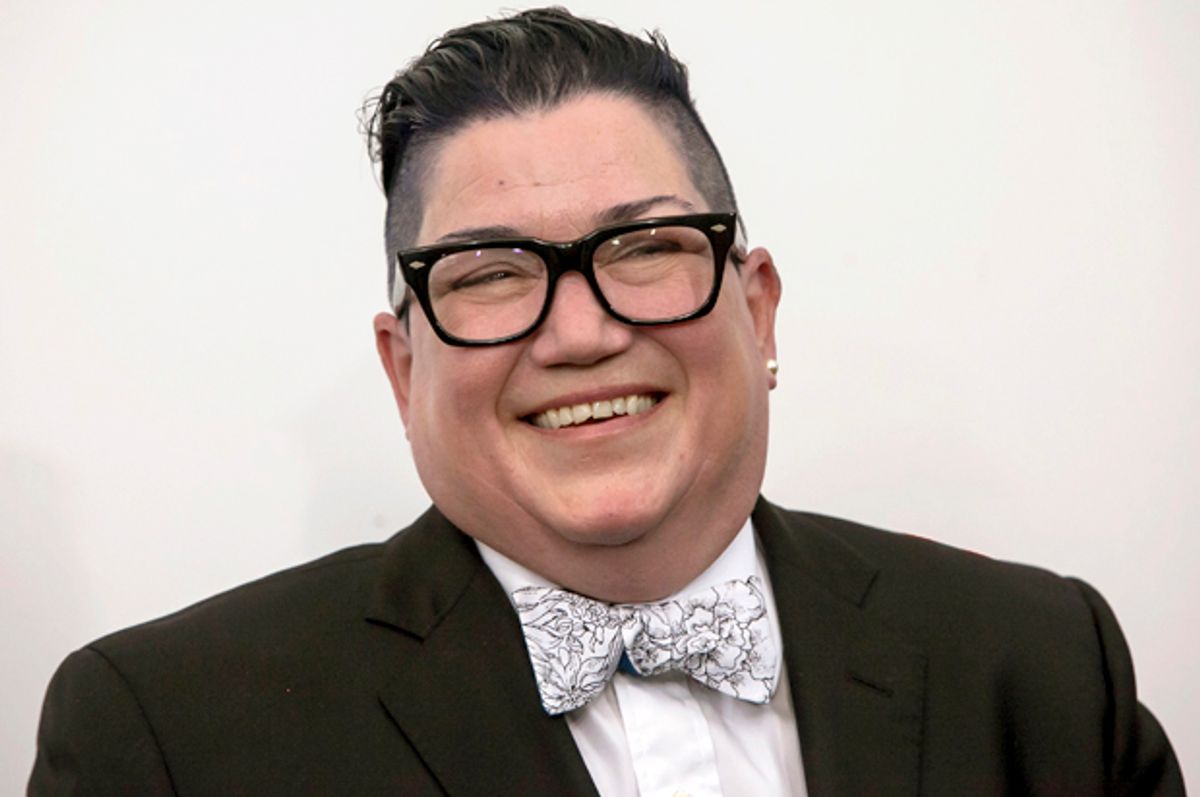 On Tuesday, TMZ posted footage of "Orange Is the New Black" actress Lea DeLaria getting into it with a loudmouthed subway preacher who'd been proselytizing about "why America is in so much trouble today." On this particular ride, DeLaria, sporting a "BAD JEW" t-shirt, decided to take issue with his noxious yammering. "You have no right," she tells him in the video. "You have absolutely no right. Get off this train." As her voice escalates – and the man keeps talking -- she continues. "Other people believe other things and have every right to believe other things on this planet and in this world," she tells the passengers. "We do not have to be force fed this man's religious beliefs. Jesus never said for you to do this, ever. Not anywhere in the bible. Show me anywhere in the bible where it says it's okay for you to do this. You show me where Jesus told you to do this. And don't just read me one quote sir, you gotta read me the whole thing. Because about two lines after what you're about to read me, it's gonna tell you not to eat pork. It's gonna tell you not to wear clothes that are made of mixed fiber. Don't come at me, because I went to f-----g Catholic school for twelve years and I know every line." The man continues to preach as DeLaria shouts, "As long as you keep talking, I'll keep talking. So if you want to press your faith, go into another train." And sure enough, she keeps going, attempting to lead the passengers in a round of "99 Bottles of Beer on the Wall" and talking over him while the man yammers on about "Sodom and Gomorrah" and of course, "the sin of homosexuality."

For her outspoken act, DeLaria has received mostly glowing reviews, with Slate saying, "Textual hermeneutics are debated, uses of public space challenged, and in the end, DeLaria does what many a strap-hanger has only fantasized about — annoy the annoyer. Well done, Boo, well done." And UPI reported the incident by saying that "Lea DeLaria stood up for herself and her fellow metro riders on a New York City train Tuesday and demanded that a Bible preacher stop annoying everyone aboard." Yet as a regular subway passenger myself, one who has endured a multitude of train evangelists, the whole thing gets a huge "Thanks but no thanks" from me -- and frankly, I'd wager, more than a few of the very uncomfortable looking passengers in that video.

Let me give you some context. First of all, I cannot overstate what a soul-sucking, demoralizing, disgusting experience riding on the New York City subway system is. Truly, those of us who do it on a regular basis are a beaten-down lot. All most of us want to do is get from Point A to Point B with a minimum of inconvenience and drama. TMZ reports DeLaria's exchange occurred on the D train on Tuesday morning, though other reports put it as an M, and it looks more like an M car. That's weekday rush hour, and additionally, there were problems Tuesday morning on the B line, which means that both the D and the M would easily have been even more crowded and delayed than usual. When a person carrying a bible stands up in the middle of all that, the traditional response is to groan and hunker down. The last thing most people in those circumstances want is a philosophical debate or worse – another shouting person. It's like when the breakdancers are in the car doing their routine and the mariachi band comes in the other end of the car. All you want is for the pain to stop.

I happen to love Lea DeLaria. I've been her comedy fangirl since the nineties. I love Big Boo. Even watching that uncomfortable subway video, I find myself envying her amazing "GOD HATES BAGS" shopping bag. But getting into an argument with a shouting person on the subway is like responding to the comments on the Internet. Why? Why would you do that to yourself and others? The yelling preacher is no more likely to reconsider his actions than anyone on that train is likely to be converted to his homophobic brand of Christianity. The subway is not a productive venue for thoughtful conversation, in large part because one participant in this scene is the kind of person who thinks that yelling at strangers on the subway is a good idea.

As a straight person, I understand that I can never know how personally hurtful guys that like that subway clown are to gay men and women like DeLaria. I can only say that yes, I am deeply offended by their presence whenever they show up spewing their hate, especially when they do it in front of my children. But I also try to remember that they're doing it because they're crazy people and that arguing with crazy people is frustrating for everybody but the crazy people. (See also: Why the "block" feature on Twitter is so very, very necessary.) I've been on moving cars when physical altercations between strangers have erupted; I've seen aggressive, erratic individuals dragged off by the cops. That ride can be a real powder keg of potential stress and violence. And my job as I see it when I'm riding the subway is to not make the ride harder or more tense for anybody else. So my response when someone tries to rebut obvious insanity isn't "Good for you!" It's just, man, I should probably get a bike.