Mourning Wendy Davis' loss: As a Texan, here's why I'm so disappointed

I was there the night of her famous filibuster. Even though I saw the loss coming, this is why it was so painful 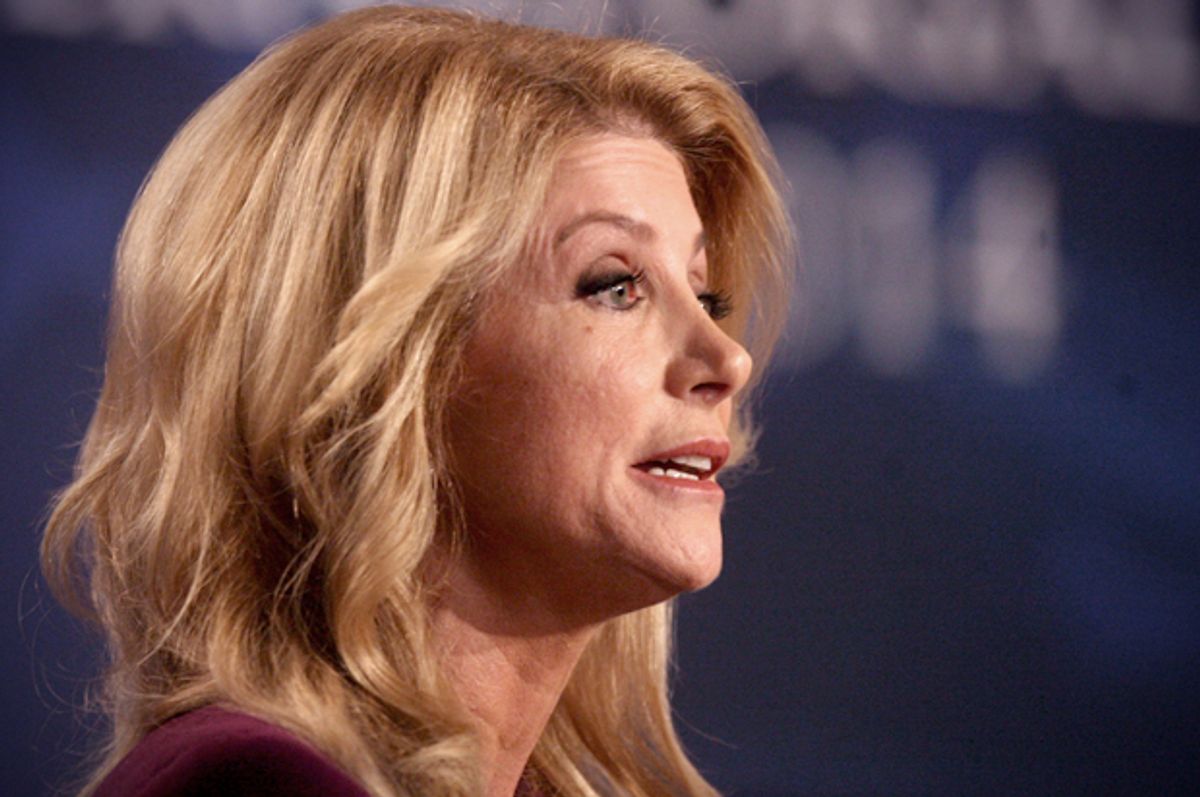 I was at the Texas Capitol on June 25, 2013. I waited for hours to get into the Senate gallery so I could see Wendy Davis stand on the floor in her hot pink sneakers, doing her best to protect the rights of the thousands of women who were watching her from above, rooting for her from the rotunda and depending on her from the farthest-flung reaches of the state. In what was literally the 11th hour, state guards shut the doors to the viewing gallery and locked them from inside. I was at the very front of the line and would have been the next person allowed entry.

I wasn't, though, so I stayed in the hallway with the other people dressed in orange, huddled around a stranger's phone and trying to glean from the Internet what all the yelling inside was about. It's difficult to describe what it felt like to listen to a chorus of people screaming "let her speak" from just outside the Senate chamber that night, or what it felt like to be quite literally shut out of my government — to be shut out of the process by which a predominantly male Legislature ostentatiously attempted to strip Texas women of our rights. It was exhausting.

One of my close friends, Natalie, was dragged from the Capitol kicking and screaming earlier in the day because she got out of the gallery line to use the bathroom. As if she, like the rest of us, hadn’t been fed up enough already, she finally got fed up enough to go home. I got fed up and went home too, after it became so hard to figure out what was going on in the Senate chamber that it felt as if I'd be more informed watching the Texas Tribune live stream from my bed. It was so hard to hear anything from the hallway.

But what I could hear clearly was that chorus of people screaming, "Let her speak."

That's what I felt like screaming alone in my apartment last night when the returns came in and Wendy Davis lost. I wanted her, finally, to have a real chance to speak for the Texans who wouldn’t have had a voice at all when Republicans attempted to pass the restrictive antiabortion bill Davis stood up against for so many hours. The bill would’ve just passed, without much fanfare, if it hadn’t been for Davis’ filibuster. And that would have been a problem.

The measure did pass, and that is still a problem. The fact that HB 2 is Texas law (albeit one that the Supreme Court has partially blocked) is one of the things that made Davis’ loss feel inevitable to many of her supporters, including myself. I know Texas, and so I know that change does not happen quickly. And I know logic, so I know that change does not happen when there is one Wendy Davis facing a sea of Greg Abbotts. And change certainly cannot happen when the federal judiciary gives state legislators the green light to effectively deprive huge numbers of Texans of their right to vote.

So, I knew this loss was coming. A lot of my friends from home did too. But that could not stop any of us from supporting Davis anyway, nor from hoping that maybe, just maybe, she really would win.

“I ask myself, how do you rally behind someone you know will lose?” my friend Brianna told me. “It is difficult to take Davis’ candidacy as progress when it resulted from something so archaic and wrong (HB 2), and when it won’t yield immediate results. But as someone who regularly defends Texas’ complex identity, I am damn proud that Wendy Davis ran and damn proud there’s resistance.”

For a generation of Texans who can’t remember when Ann Richards was in charge, such pride and hope have been vital, I think. At least, they have been for me. They’re sentiments I’ve never felt before with regard to Texas politics. I’ve only known older conservative white men standing for everything I’m against, not representing me or much of Texas at all, and that has only left me feeling hopeless and pissed.

My friend Natalie, the one who wouldn’t leave the Capitol without a fight, felt similarly, and was much more optimistic about the Davis campaign than I was. I spoke to her last night, just before the counties started reporting results, and she was still holding out hope.

“Texas has experienced such monumental political change since the filibuster and the beginning of this campaign that it’s hard to imagine waking up tomorrow with a bunch of white dudes and crooks still in the Capitol,” she said. “Actually, the more I think about it, the more optimistic I am. I wonder what this election would have looked like if there had been no protests at the Capitol. Wendy won’t win, but I think the race will be close enough to make Greg Abbott and his roving gang of old white shitbags very uncomfortable.”

No amount of hope can truly alleviate disappointment over the inevitable, but the hope Davis has offered — during the filibuster and during the campaign — does feel like the sign of a future where the inevitable might become just one of many possibilities. And it feels like Texans will begin to demand more possibilities. We will continue to demand access to affordable healthcare, but we will also demand funding for public education, accessible higher education, equal pay, a living wage and comprehensive immigration reform. We will demand real crackdowns on sexual assault and domestic violence and rape kit backlogs.

It’s one thing to suppose that foul play (specifically in the form of voter ID laws) is one of the only things keeping conservatives like Abbott in power. It’s another thing entirely to feel as if such foul play really can be beat. As Natalie put it, “Mega-conservative white dude reign in Texas will only last as long as they can prevent women and people of color from voting.” She's right.

I am as confident that change will eventually come to Texas as I was confident that Davis would lose last night. Am I upset that change didn’t come sooner? Certainly, yes, of course — because I know how many Texans cannot wait for change to happen. What is considered inevitable isn’t good enough for Texans, and it hasn’t been good enough for a very long time. It might take a while yet to turn inevitable into a possibility, and it won’t be surprising if things get worse before they get better. Abbott’s win is a bad and scary thing, and I am sure he will do whatever he can to continue a legacy of damaging conservative rule in Texas.

But I am also sure that enough Texans will become even more sick and tired of that legacy than they already are, and that when they do they will show the fiery brand of resistance I saw at the Capitol in June 2013. Wendy Davis helped stoke that resistance. It’s not going away any time soon.