Obama should welcome impeachment: Take bold action on climate, immigration and force the right to overreach

Learn the lesson: The GOP won't work with you. Instead of bad compromises, enact a populist agenda and fight for it 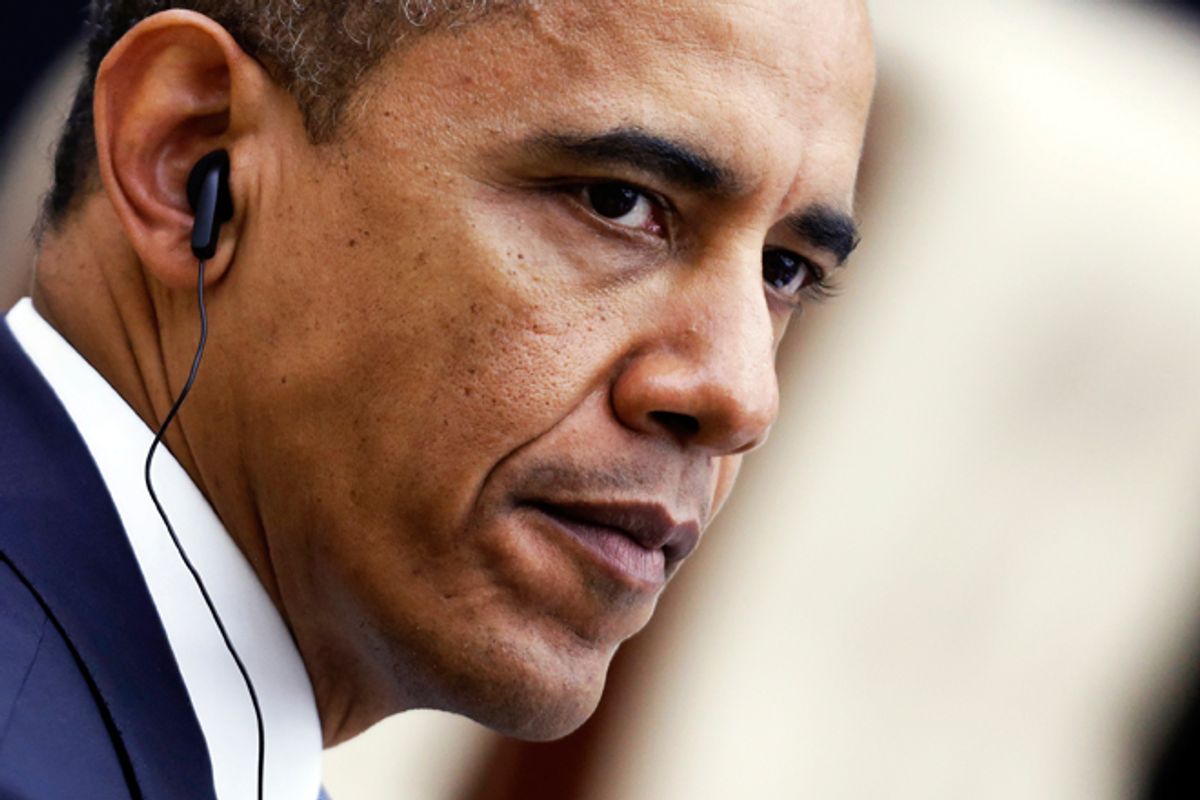 We’ve been here before, right after the 2010 midterms, but this time may be even worse. Last time President Obama tried to compromise his way out of gridlock, but the Tea Party-driven Republicans were too insatiable. The president was willing to give away the store, but they wanted the whole damn town. They overplayed their hand, and Obama, in spite of himself, stumbled back into some semblance of coherence and principle — although his thirst for compromise brought the nation to the brink of default before he veered back in the direction of sanity.

This time, having taken over the Senate, impeachment is very clearly on the table for Republicans, and if Obama wants to avoid an excruciating replay of 2011 mixed with 1998, the best thing he could do is welcome the impeachment threat with wide-open arms. Because the truth is, there’s really no alternative, no deal to be struck with the GOP, beyond stage-managing the details of his own political annihilation.

The GOP won because the 2014 electorate was even older than in 2010 — which is to say, it won because the demoralized, dispirited and divided Democratic base did not show up. The Democrats had no agenda that they were willing to clearly articulate, even though Obamacare has performed quite well, and their populist economics are, well, popular. And so their base stayed home. But policywise, the GOP had even less: no agenda at all, nothing to run on other than fear itself and Obama’s cooties. Hence, it has no policy mandate at all.

Quite the opposite, the clearest policy message of election night was something congressional Republicans staunchly oppose: Statewide minimum wage hike initiatives won big once again in four red states -- 69-31 in Alaska, 65-35 in Arkansas, 59-41 in Nebraska, and 55-45 in South Dakota. Illinois also passed an advisory measured 67-33.

Of course, Obama fighting back remains difficult, if not impossible to imagine, his self-destructive instinct to compromise is such a core part of him. And yet, the logic of the situation could prove overwhelming. This is going to be a very conservative Senate, which wants nothing less than to utterly nullify Obama’s presidency, to make it as if it had never happened. Mitch McConnell once vowed to make Obama a one-term president (a commitment he repeated on the eve of the 2012 election), but now they want even more — to effectively erase him from history.  Oh, sure, post-election, McConnell said otherwise:

"We do have an obligation to work together on issues where we can agree. I think we have a duty to do that. Just because we have a two-party system doesn’t mean we have to be in perpetual conflict."

You could seIl tickets to a duel between this guy and the real Mitch McConnell.

But that sort of hyper-mendacity is par for the course, so far as center-right Beltway politics are concerned. Obfuscation, bluffs and false promises are virtually all they know or do.  They don’t have a choice, really, considering how unpopular Republicans remain — 36.2 percent favorable to 53.2 percent unfavorable going into their landslide victory, 17 points underwater compared to just 6 points underwater for the Democrats, 42.2 percent-48.4 percent.

So, obfuscation it is, and obfuscation it shall remain …. Unless Obama chooses to fight back — hard — and define the issue terrain in terms that resonate with people’s lived experience, as well as with their hopes for the future.  He showed on the campaign trail in 2008 that he knows how to do this. It was his choice, on taking office, to set that knowledge aside, and to try to make deals and play nice-nice with people who hated his guts so much that they’d walk away from things they once supported (Obamacare’s individual mandate, a congressional deficit commission) as soon as he showed any interest in them.

Now, with two years and two months left to govern, it’s finally time for Obama to wake up and smell the coffee. He can continue to dream of a make-believe fantasy world where “grown-ups” make wise decisions, while children howl on both sides. Or he can face the facts — as laid out by Mike Lux in "The Progressive Revolution: How the Best in America Came to Be" — that truly pathbreaking great strides in American history are highly concentrated in a few brief windows of overwhelming progressive dominance, and that lasting progress depends on building on those foundations, and protecting them from erosion until the next opportunity for advancement presents itself.

The first two years of Obama’s presidency were one such window, despite Obama’s misguided preoccupation with a bipartisanship fantasy that yielded almost nothing but delay and lost opportunities.  Yet, the passage of Obamacare and a too-small stimulus that nonetheless prevented a deep depression do remain as important, if imperfect accomplishments.  Millions of previously uninsured now have healthcare coverage, and the U.S. economy is far more healthy than it was when Obama took office.

The problem, of course, is how that economic health is maldistributed, so that corporate profits soar, while  average Americans continue living in a depression-like limbo, with sharply lower median incomes, and a drastically shrunken labor force (see “Two Charts Show Why the Obama Economy Sucks” by Ian Welsh).  These are deeply serious problems, which should have been addressed as part of Obama’s recovery agenda. Since they were not, they will be inherited by whoever follows him.  So now his legacy question is, will he help make things even worse, trying to make deals with the likes of Mitch McConnell? Or will he do his best to sow the seeds for future possibilities that others must bring to fruit?

Of all the issues that cried out in vain for major action in his first two years, there are two in particular that hang in the balance just now, because significant action remains within the scope of Obama’s executive authority: immigration and climate change.  Obama has already foolishly delayed action on immigration one time too many at the very least. So now he must act. Holding back on immigration action did not save Mark Pryor, or help Michelle Nunn or Alison Grimes, as all the small-minded managers had hoped. Perhaps it helped Mary Landrieu survive into a runoff, but it far more likely cost Mark Udall a seat that should never have been lost, so even on the “pragmatist” grounds that justified it, delaying action was a profoundly foolish move.

So if Republicans want to impeach him for taking executive action to stop being the deporter-in-chief, he should welcome them with open arms. It would be a golden opportunity for Obama to demonstrate his willingness to put something of his own at risk to stand with those who feel he has abandoned them.

As far as climate change is concerned, what Republicans want here is to roll back executive action and authority, taking regulatory power away from the EPA with respect to CO2, and overriding the normal environmental review process for the Keystone XL pipeline.  Fourteen years ago, George W. Bush promised to regulate CO2 as a greenhouse gas if he were elected president. That broken promise was surely crucial in getting him close enough to steal the Florida election.  For Obama to bend now, and become complicit in that ongoing betrayal of the simple promise to follow the science where it leads to protect the planet, now that would be an act of historical betrayal worthy of impeachment. If congressional Republicans want to impeach him for not betraying future generations, then, once again, he should welcome them with open arms.

No doubt there will be other flash-point issues as well. But these defining issues are already out there on the table, and their relationship to the long arcs of history and intergenerational justice are clear. The best thing for Obama to do on these key issues would be to welcome the threat of impeachment — all the more so because it’s utterly groundless. Let those who would attack him simply for being who he is show their true colors and stand the judgment of history.