There is no GOP "mandate": Not even Republicans know what their governing agenda is

If last night's big GOP win gave the party a "mandate," then someone should tell the Republicans what it is 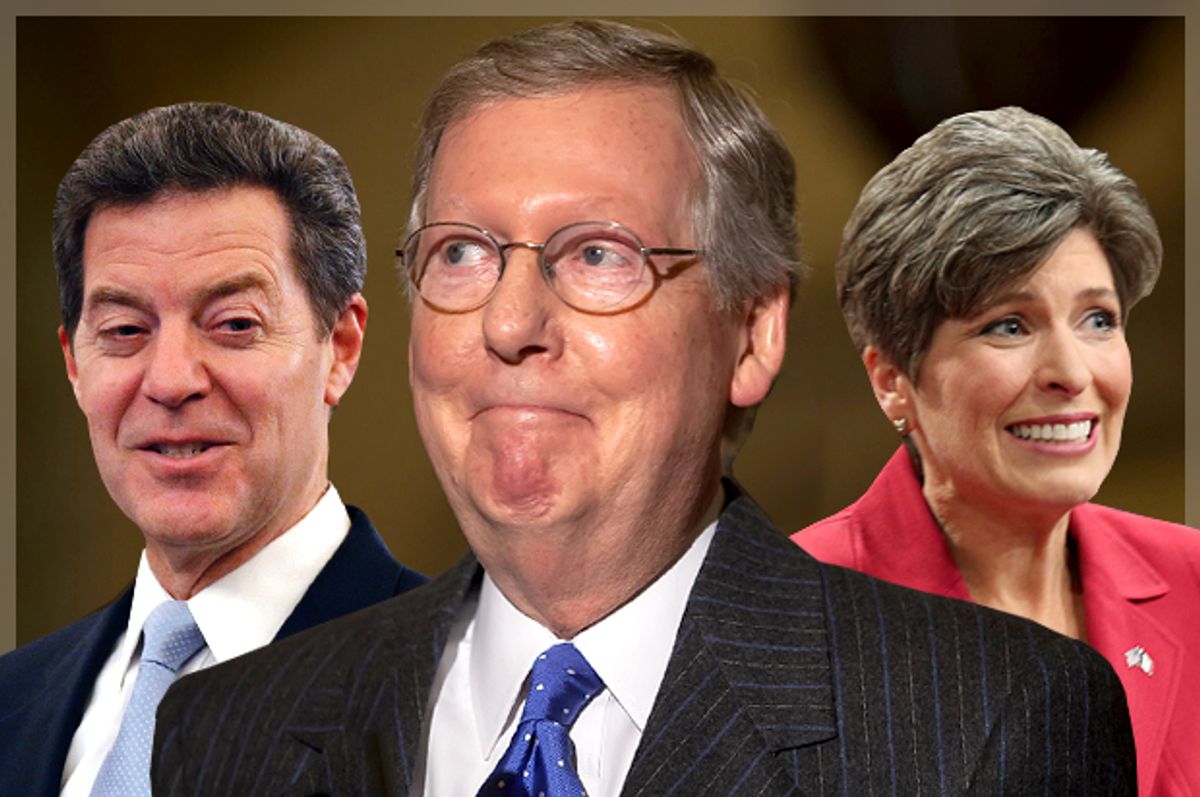 Well … that was ugly. Actually, “ugly” isn’t quite strong enough a word for what happened to the Democrats last night. Brutal, savage, vicious – pick your hyperbolic adjective, you really can’t go wrong or risk going overboard. Republicans took the Senate, torpedoed incumbents, took most of the “tossup” gubernatorial races, and made close contests of races that had no business being close. The Democrats’ vaunted voter targeting and mobilization programs, which were supposed to hold back the tide and ride to the rescue of one or two incumbents, failed horribly at turning out the party’s base. Trailing not far behind the Democrats for “worst election night” were the pollsters, who screwed up basically everything, most notably the Senate race in Virginia.

That said, we’re pretty much where everyone assumed we’d be the morning after: Republicans in the driver’s seat in both Houses of Congress. They just got there with a bit more oomph than anyone expected. So now we ask the question: What’s next? Older, whiter America handed the GOP the reins, so where are they taking us? Fox News’ banner headline this morning was “REPUBLICANS GIVEN MANDATE TO CHART NEW COURSE FOR AMERICA.” So what is that course? What is the “mandate”?

Political “mandates” are a curious thing. Typically they’re reserved for big, campaign-defining issues: the sorts of things voters care very strongly about. And often they end up backfiring on the people who claim and act on them. In 2004, George W. Bush claimed a mandate to “stay the course” in Iraq and privatize Social Security. He did one, tried to do the other, and two years later voters punished his party mightily. In 2008, Barack Obama earned himself a mandate to end Bush’s war and reform the country’s healthcare system. He did both: The latter contributed to a midterm thumping of his own, while the former caused him headaches heading into last night’s vote.

So what’s the GOP’s big issue as they head into legislative supremacy?

Yesterday morning on MSNBC, Ari Melber asked Republican National Committee chairman Reince Priebus that very question: “What is the one most important thing you think will be done or passed if you win the majority?” Priebus actually offered two things. “We will pass a budget in both chambers, number one. And we will pass the Keystone pipeline, number two.”

Well, there’s an inspiring to-do list that touches on the two issues voters cared most about: passing some version of Paul Ryan’s budget and authorizing an oil pipeline that’ll create a handful of jobs as it hastens the destruction of the environment. Whatever budget the GOP puts its stamp on will likely contain provisions repealing the Affordable Care Act, which means it’ll be struck down by the president’s veto pen. And even if they do manage to pressure Obama into signing off on the Keystone pipeline, it would represent little more than a symbolic victory in the Republican quest to drill and burn as much carbon as possible.

So, not a whole lot of clarity coming from Reince Priebus on the Republican charge to govern. But what about the elected Republicans? Surely they’ve had time to think this out. Last night on Fox News, as it became apparent that the Republicans were going to romp to victory, Bret Baier and Megyn Kelly interviewed House Majority Leader Kevin McCarthy and asked him the same questions. Kelly wanted to know “what specifically will they do to try and advance an agenda.” McCarthy said “well, the first thing we’d do is try to move the agenda forward,” and then ticked off a few bland issue areas like “energy” and “tax reform.” Bret Baier tried again, asking what Republicans would do first when they take power. McCarthy answered: “The very first thing I want to see happen? I want to see the House and Senate do a joint retreat.” At that retreat, he added, they’ll figure out the agenda.

This vagueness was a standard feature of the insurgent Republican campaigns. Joni Ernst’s campaign was about being from Iowa and castrating hogs, with gauzy promises to tackle big government. Tom Cotton’s won himself a Senate seat by mechanically repeating over and over and over that Mark Pryor voted for the Obama agenda. My favorite example of this policy-phobia came from the Oct. 21 Senate debate in New Hampshire, when Scott Brown was asked how he would ensure that beneficiaries of expanded Medicaid would not lose coverage if the Affordable Care Act was repealed. Brown said that his plan was to come up with a plan: “We have the ability to develop a plan that addresses those concerns.”

Even conservatives are noting the lack of any sort of Republican governing agenda. “After the confetti settles, it’s time for the GOP to get to work,” writes FreedomWorks’ Matt Kibbe. “Unfortunately, their hand-picked candidates failed to articulate their policy priorities from the campaign trail, and instead relied on a campaign platform that can be best summed up as ‘I’m not Barack Obama.’”

There's no obvious, specific answer for why last night shook out the way it did, but some broad generalizations that were assumed to be true heading into Election Day certainly came to fruition. Voters were angry with Obama, dissatisfied with the direction of the country, frustrated with the pace of economic recovery, and wanted to hit something. In the states where Republicans enjoyed structural advantages, the Democrats were easily hittable, but even some (D) candidates running in relatively safe states and districts got hit, too. That translated into some horrific pain for the Democrats, but that can’t be confused as a mandate for the GOP.

Bottom line: Republicans were just rewarded, and quite handsomely, for doing little beyond saying “no” to President Obama. They shut down the government last year and paid no noticeable price for it. The voters who handed the Republicans the Senate didn’t send them there to compromise with Obama or cut deals with him. The Republican “mandate,” such as it exists, is to be anti-Obama, and seeing as that’s worked out for them pretty well, there’s no reason to think they’ll switch it up any time soon.