A response to Ta-Nehisi Coates: Why Black women are overlooked -- again

Sure, Ida B. Wells deserves praise -- but so do other black women who didn't make their names advocating for men 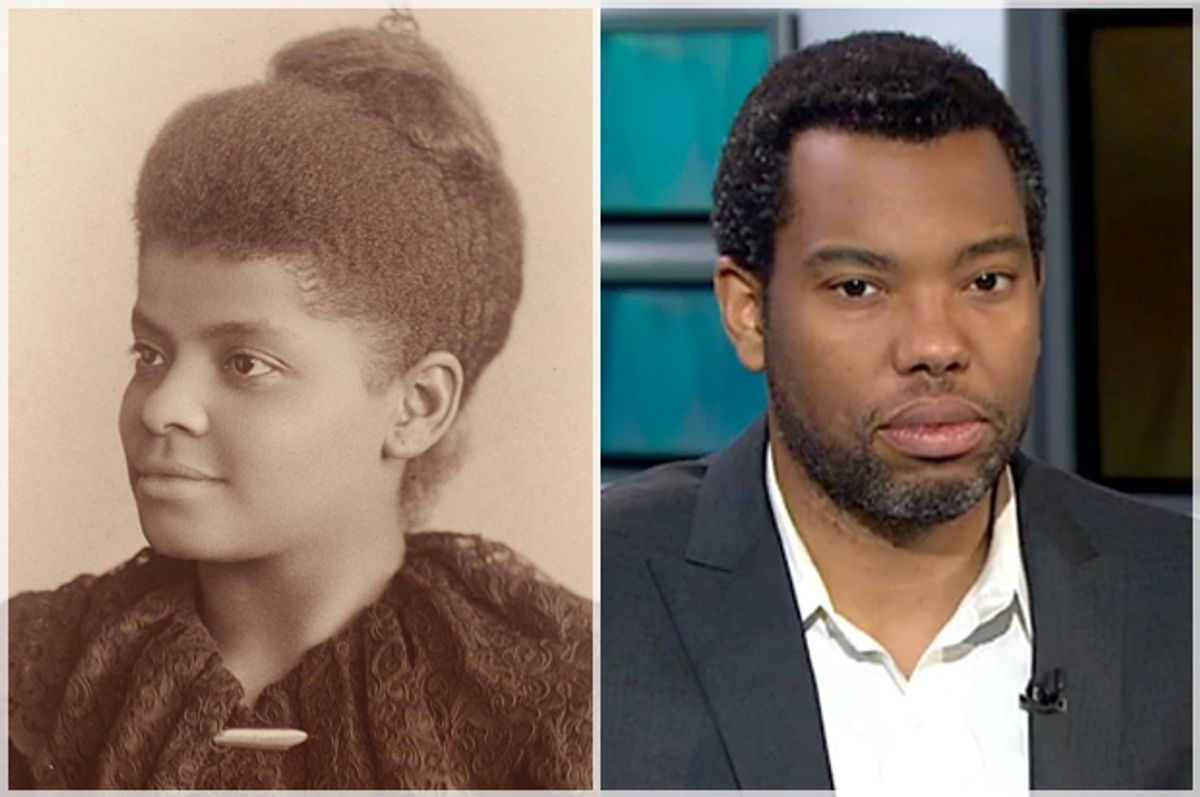 I was struck by the fact that I could assemble almost no roomful of white people with that level of both educational and class diversity and even come close to the same level of collective physical, emotional, sexual and structural trauma that the women who came to testify and those who came to listen have endured.

Four days later, my emotions are still raw. Hearing Rekia Boyd’s brother break down in tears discussing what it meant to have to take his baby sister off life support after she was shot for no reason by the police was heart-wrenching. Listening to my good friend and her mother talk about going homeless in the early 1990s after loss of employment nearly brought me to tears. Reflecting on my histories of violence and what the journey to not be limited by those experiences has meant is sticking to me pretty closely in this moment.

Perhaps it is sticking because as we woke up Wednesday morning, we woke to election results that found America tacking even further to the right. A new report out from the Joint Center for Political and Economic Studies suggests that black voter turnout is key to Senate and gubernatorial races in places as disparate as Louisiana (my home state), Florida, North Carolina, Pennsylvania and Wisconsin. Black women in the last few elections have been the most consistent Democratic voting base, and the largest singular demographic of voters in 2008 and 2012. So while it wasn't enough this time, to the extent that black voter turnout mattered in these elections, the future is up to black women.

But perhaps this political moment also feels urgent because yet again black women have been asked to expend their political labor defending black men from a problematic video released by the anti-street harassment organization Hollaback late last month. In the now viral video a procession of black men can be seen catcalling and even following a white woman for over 10 hours. I viewed the video in light of reports this weekend from black women activists in Ferguson, Missouri, who came to the town hall, that they frequently find themselves on the front lines of street protests. They frequently outnumber the young men being arrested for acts of civil disobedience. They, too, are putting their bodies on the line in cop watch initiatives, which surveil police to make sure they don’t violate the rights of local citizens. Often the efforts of these women are met with unwanted sexual attention from some of the men with whom they work.

One activist said, “There is always room for us in the streets, but there is often not room for us at the table.”

The future is up to black women. But nobody will tell that truth. If we want to maintain any semblance of a progressive agenda in this country, that is dependent on whether black women can make their votes count. If we achieve justice in Ferguson, it will be primarily because of the efforts of young black women.

That has always been true. It has always been true that black women have had a vision for both black folks and for America even while being overlooked as leaders by white people and black men. I was reminded of this when I read Ta-Nehisi Coates latest piece for the Atlantic challenging Charles Barkley for a comment he made about “unintelligent black people” recently. Pointing to a long history of black leaders decrying the machinations of working-class people, Coates argued that we should situate ourselves in the tradition of Ida B. Wells. In it he lauds Wells for rethinking her initial stance that the lynchings of black men in the post-Reconstruction era must have been justified by black men’s rape crimes. Wells famously changed her position when three of her homeboys were lynched for running a successful grocery business that competed with a local white grocer.

Ida B. Wells is showing up a lot in our current conversations on the black left about traditions of radical black women who challenged state power and exposed the racist carceral logics that unduly criminalize black men. Wells put her body on the line to challenge the dominant media narratives of her day about brute black male criminals. Among many current black male public intellectuals, Wells is the one black woman who always make their roll call of historic black women to whom we should pay attention. The sisters in Ferguson and even the young women who have written scathing think pieces castigating Hollaback for their criminalizing of black men are certainly in the tradition of Wells.

And yet, I feel like this canonizing of Wells offers a limited picture of the political traditions and class schisms through which black women have shaped our future. During our town hall on Saturday, a young sister named Tanya Fields challenged the seeming elitism of our work. She pointed to who was and was not in the room in the vaunted ivory towers of Morningside Heights. She spoke of the ways she, a graduate student and unwed, but partnered, mother of five, had been shamed repeatedly by other professional black women. Her important intervention was not unlike an intervention she had raised during a conversation between black feminist public intellectuals bell hooks and Melissa Harris-Perry at the New School for Social Research last year.

Though I deeply affirmed her narrative of being shamed by black women committed to a troubling kind of respectability politic, I found myself bothered by the assertion that all black people who move through elite institutions have adopted an elitist mentality. So I shared with her what it means for me to be a first generation college graduate and Ph.D. in a family that is still largely working-class. I shared with her what it means to make a professional salary as a black woman without children, partner or property.  (The tax man cometh.) I see our struggles as interconnected. Certainly while I am more privileged, I do not move through the world with anything approaching the privilege of my white academic counterparts.

The experience reminded me of something that bothered me as it crept around the edges of the Coates piece. In it, he not only quotes Ida B. Wells, but also her counterpart and club woman colleague Mary Church Terrell. I am at work on a book that examines the political and intellectual legacy of both these women, among some others.

Certainly Mary Church Terrell said appalling things about working-class black women in the early 1900s. For instance, in one speech, she argued:

even though we wish to shun them, and hold ourselves entirely aloof from them, we cannot escape the consequences of their acts. So, that, if the call of duty were disregarded altogether, policy and self-preservation would demand that we go among the lowly, the illiterate, and even the vicious to whom we're abound by ties of race and sex, and put forth every possible effort to uplift them.

But I hold these offensive words in tension with the fact that she regularly rolled into all-white spaces and took white people to task for their deadly investments in racism and white supremacy.  Moreover, Wells argued that black women should commit themselves to “a standard of earnest, thoughtful, pure, noble womanhood, rather than one of fashion, idleness and uselessness.”  And she also advocated for black women to help women of “lower classes.” I cannot help feeling that black women’s admittedly deserved class baggage often exempts them from the respect they deserve as political thinkers and strategists on the left, unless, like Wells, their advocacy was primarily in service of black male needs.

But Terrell also numbered herself among the “colored people” who had a “duty to let the world know how we felt about having our rights as citizens violently snatched away, how alarmed we were at the result of the wholesale disenfranchisement of colored men, how we were misrepresented when lynching was discussed, how cruel and terrible is the convict lease system.” That was in 1913.

When we look at the racial agendas for which black women just cast their votes Tuesday, they sound strikingly similar to what respectable club ladies advocated for a century ago – a secure vote, the dismantling of the carceral state, an end to sexual violence against black women, and an end to the state-sanctioned killing of black men. Ida B. Wells was a pioneer in much of this work, but she had colleagues, who did the work, too, despite problematic class politics. By 1951, when Terrell was in her late 80s, she was known to go out in a fur coat in D.C. to protest racial segregation at various businesses.

What does that mean for us today? One, I do not champion respectability politics and class-shaming of any sort. But I remember that the world we are fighting for is one that all kinds of black women of all kinds of class positions came together and built. Two, I am skeptical of the way that Ida B. Wells is being canonized within the black radical and prophetic tradition because while she deserves it, there is a problem when black men only name and adopt the sister most well-known for her advocacy for black men. I also cite Mary Church Terrell and Ida B. Wells together, because they laid the scaffolding for so much of the work that got taken up during the civil rights era -- work we are still doing today. And frequently neither of them is given due credit. But I also hope that in recuperating Mary Church Terrell, I make space for acknowledging the pitfalls of elitism without dismissing much of the important political work black women have done.

Americans have, whether they know it not, always relied on black women to craft a vision of our national future, one in which we live up to our stated democratic aims. As we awake this week after the 2014 midterms to see what the future holds, I find that despite my disillusionment with our current two-party system, one Ida B. Wells shared, and our abdication of anything approaching racial justice, that my money and my hope still lie with black women and their vision for America.