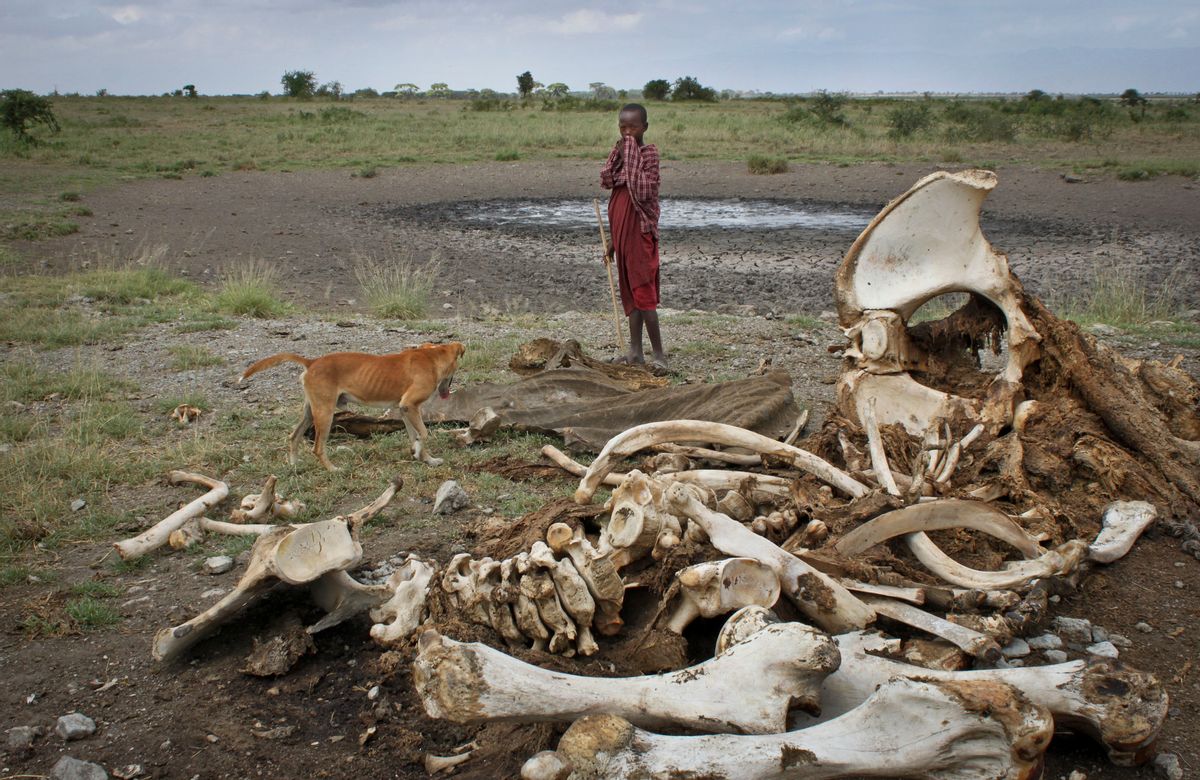 FILE - In this Wednesday, Feb. 13, 2013 file photo, a Maasai boy and his dog stand near the skeleton of an elephant killed by poachers outside of Arusha, Tanzania. (AP/Jason Straziuso)
--

According to a report from an environmental NGO Environmental Investigation Agency, Chinese officials and businesspeople used a state trip to Tanzania to smuggle so much ivory out of the country, that its price doubled. According to the report, Chinese-led criminal groups worked with Tanzanian officials to trade, with some of the ivory loaded onto an official state plane in 2013. The accusation undermines China's supposed push to end the illegal ivory trade, which has resulted in widespread elephant poaching.

China is the largest importer of illegal ivory, while Tanzania is its largest exporter.

Investigators with the organization have documented, often with hidden cameras, Chinese and Tanzanian smugglers acknowledging that they had bought and sold illegal ivory, which several Chinese traffickers said accounted for 90 percent of the Chinese ivory market...

Chinese smugglers have set up a widespread network in Tanzania that includes staff members of the Chinese Embassy in the country’s largest city, Dar es Salaam, the organization said.

During a November 2013 raid on a house in a suburb of Dar es Salaam, the police found 706 tusks, large amounts of cash, scales, a minibus with a secret compartment for hiding ivory, and license plates. The three Chinese men arrested were packing the tusks in sacks under snail shells and garlic. According to the report, the suspects used a business exporting seafood to conceal their ivory smuggling.

A month later, the official connection became apparent when a Chinese naval fleet docked at the port of Dar es Salaam for four days of “cultural exchanges.” The official visit benefited local ivory traders, the report said, with one dealer boasting of earning $50,000 from sales to Chinese naval personnel. During the visit, a Chinese citizen named Yu Bo was arrested trying to enter the port with 81 tusks — ivory from about 40 elephants. Convicted of ivory smuggling and fined $5.6 million, Mr. Yu was sentenced to 20 years in prison; he is the only person to have been convicted in eight major cases since 2009.

"The report is groundless, and we express our strong dissatisfaction," said Chinese foreign ministry spokesperson Hong Lei. "I don't think there's hard evidence, and I have not seen such cases ... Allegations without evidence are not believable, and I don't think it is appropriate for [EIA] to come up with this mess."

In the past five years, poaching has killed half of Tanzania's elephants, with about 10,000 elephants killed just last year.