Man eating nothing but Olive Garden speaks out: "I have not had one meal that was not just perfect" 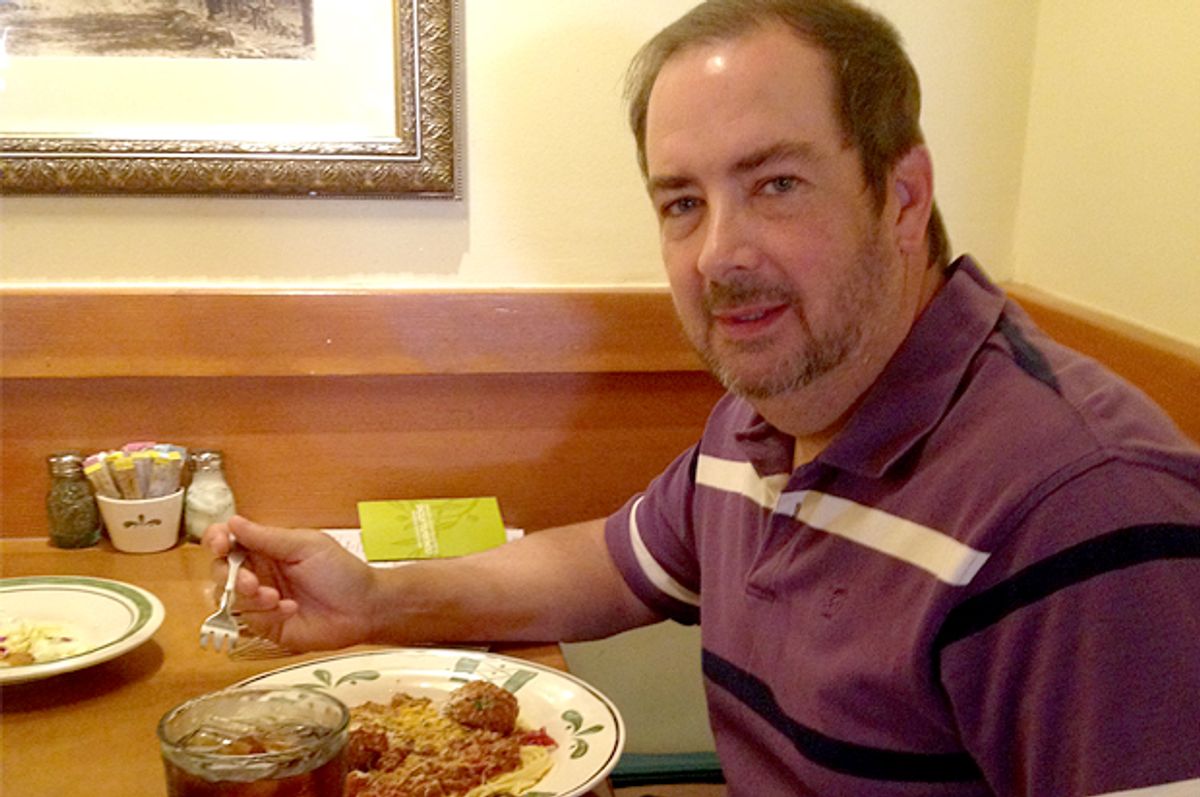 When Olive Garden announced earlier this year that it would be offering a limited number of "Never-Ending Pasta Passes," with which a person could pay $100 for an all-you-can-eat experience at the chain for seven weeks, we could only hope that someone of great focus and determination would go whole hog and eat nothing but Olive Garden for every meal.

As we learned earlier this week, such a person does indeed exist. He is Alan Martin, a Burlington, North Carolina, minister and father of two, who has eaten at Olive Garden twice a day, every day, for the past six weeks. Salon spoke with him yesterday to learn more about his gustatory ambitions.

Why did you decide to take on this challenge?

Well, I like a good value. I won a Chik-Fil-A contest a couple years ago where I got free Chik-Fil-A breakfast for a year. And I kinda liked it. And I thought: Well I like to eat for free, and my family, we like a good coupon. We usually go out to eat and we have a "kids eat free" coupon or we go out on the night the restaurant we like has kids-eat-free. To save a little money in today’s economy, we try to maximize it. So six weeks ago there was a lot of publicity in the morning news shows about Olive Garden running a contest to give away a thousand cards where you can eat free, if you pay a hundred dollars. And I thought, well that’s my kind of contest right there! When I leave my neighborhood, I have to go by an Olive Garden, and I thought, you know, this is perfect. I go by Olive Garden every day of my life, I might as well stop in and eat for free. And so we thought it was a good little contest.

I sat down and got ready at 2—it was supposed to be at 3 p.m.—and so at 2:30 I sat down and logged on and created an Olive Garden account, and at 3 o’clock I tried to apply for the card, and I was one of the thousand people who won the opportunity to buy the card for a hundred bucks.

How have you gone about approaching the menu? Do you have a favorite item?

I love spaghetti and I thought that I was going to be able to eat spaghetti every day, but it has not worked out that way. There are 150 combinations that can be used on the Olive Garden Never-Ending Pasta Pass and I started to try all these different combinations—chicken parmesan and fettuccini mushroom Alfredo, and there’s a mushroom garlic Alfredo. There’s like "three meat" which has salami and sausage in it and that’s very spicy. So I’m trying all these different things and they’re all great. You know, Olive Garden’s got pretty good food.

I’ve eaten 100 meals now and the consistency of the quality of food is fantastic. I have not had one meal that was not just perfect. And in the second or third week I got into the soups and I was mad at myself for not trying those sooner. Chicken gnocchi soup, pasta fagioli soup—those are my two favorites. I enjoyed those immensely.

So do I have a favorite? Spaghetti and meatballs is my favorite. I don’t order it every time. You know, it just depends. It just depends on what kind of mood I’m in!

What is your daily routine like? Has it changed your life a lot to have to do this?

That is a great question. This is the funniest thing to me and my family—I’ve got a wife and a couple kids. The funniest thing is that we’re just going about our normal life here. I get up, I go to Olive Garden every day at 11 o’clock. When it opens, I’m the first one in and I eat. And at about five o’clock I’ll go back over and I’ll pick up a meal and bring it home and eat dinner with my family. Now my kids, I’ve got little kids that eat macaroni and cheese or, you know, a quesadilla or something. And my wife, sometimes she eats the Olive Garden salads. She’s eaten Olive Garden salads for about the last six weeks, and she’s lost twelve pounds in six weeks eating the salads. She’s on a low-carb diet. So she’ll eat the salads and I’ll eat the pasta and we all sit down and eat our dinner like a normal family would in America, except I drove out to the Olive Garden and got it and brought it back and it was free! So, no it hasn’t changed our lives at all. Again, we drive by that thing every day. I’m a minister, we go to church, we come back home, we stop by the Olive Garden, pick up a meal and bring it home.

I’ll leave out a couple of hours to go to church, I’ll stop by and pick one up, take it with me, stop by on my way back to pick one up and bring it home. And tonight when I walk in I’ll be at 102. I’ll have two more meals, and maybe I’ll let the kids have a little bit of it. They love the breadsticks—I never get any of the breadsticks.

But I have been freezing some [meals]. I can’t eat 'em all and they start stacking up in the refrigerator so I vacuum seal ‘em and I’ve got about thirty out there in the freezer that I will eventually eat. I can get to them, but it’s so much food! I mean this is a lot of food. Every to-go bag has breadsticks, salad, soup, the meal.

You are really getting your value.

Oh yeah! And, look, I’m a minister. I’m a passionate kind of guy to help people. I’m not bragging here so don’t get this wrong; we’re just talking about accounting for the meals. And there have been seven or eight or nine or 10 that I’ve given away. Last week I was driving by and I stopped at a corner and a man was there, a homeless man with a sign and I said, "Come over here." And he came over to the car and I opened the door—I’ve got a sliding glass door on my van—and I pushed the button to open the door and I said, "Get that Olive Garden bag. It’s got soup, spaghetti and meatballs, everything you need to have a great meal." And he was so happy, and he took it and he went over and sat out in the woods and started eating that Olive Garden meal. I felt good about that, helping him. And we’ve got other people like that that I’ve helped. And so I’ve given away about 10 and I’ve saved about 30. Maybe my kids have nibbled me out of about five.

I’m going twice a day during the week and three times a day on the weekend and that’s a lot of food.

How do you go in three times a day on the weekend?

I go in at 11 then I go at five and then it closes at 11, so I’ll go back out there about 10 o’clock to get another little trip in. And sometimes all I want is just a soup, so I’ll get the soup and the rest of it will have to go in the refrigerator or the freezer, because all I’m in the mood for is the soup, but they give you the whole thing and so I’m eating it.

There’s been a lot of angles to this story—people don’t believe that I’ve not gained any weight. But a lot of the meals are gluten-free. They’ve got a gluten-free pasta, I order that. And a lot of the times I don’t eat all of the meal, I just eat the top of the—I eat the spaghetti sauce and meatballs and maybe a fork of the pasta. It’s not like I’m eating three bowls of pasta every time I sit down at the Olive Garden.

No, you seem like you’re being very reasonable about it.

Right, it’s not about the food. It’s about the value. I wanted to get to 100 meals and it’s funny you called today; I reached 100 meals today. I made it to a hundred meals today.

That was a big event for me. It was one of my goals. I’m at about $1,600 in value and I’ve got four more days to try to get another couple hundred dollars out of the Olive Garden. Right now, I would really love to get to $1,800. If I could say I collected $1,800 in Olive Garden meals, that is big. I don’t know what city you’re in or anything, but in rural North Carolina, that’s a big deal.

When the promotion is over on Nov. 9, will you go back?

It crossed my mind today that this was so good and so addictive and everything that it’d be a nice surprise to just walk in here next Monday morning and sit down and pay for a meal. That’d surprise everyone. So I don’t know. I had somebody today from NBC News asking me some questions and they asked a good question. They said, ‘What is your first meal going to be when you have to go eat your first meal away from Olive Garden?’ And I thought, I don’t know! I hadn’t thought about it. I’m just trying to get through the contest here, but I don’t know. That’s a great question. I have no idea where I’m gonna eat Monday afternoon for lunch.

But I’d say Olive Garden is on the list. It’s possible, but I doubt it. I might need to miss a lunch.