It's already been said that Greg Abbott won among women voters. So are women of color not women? 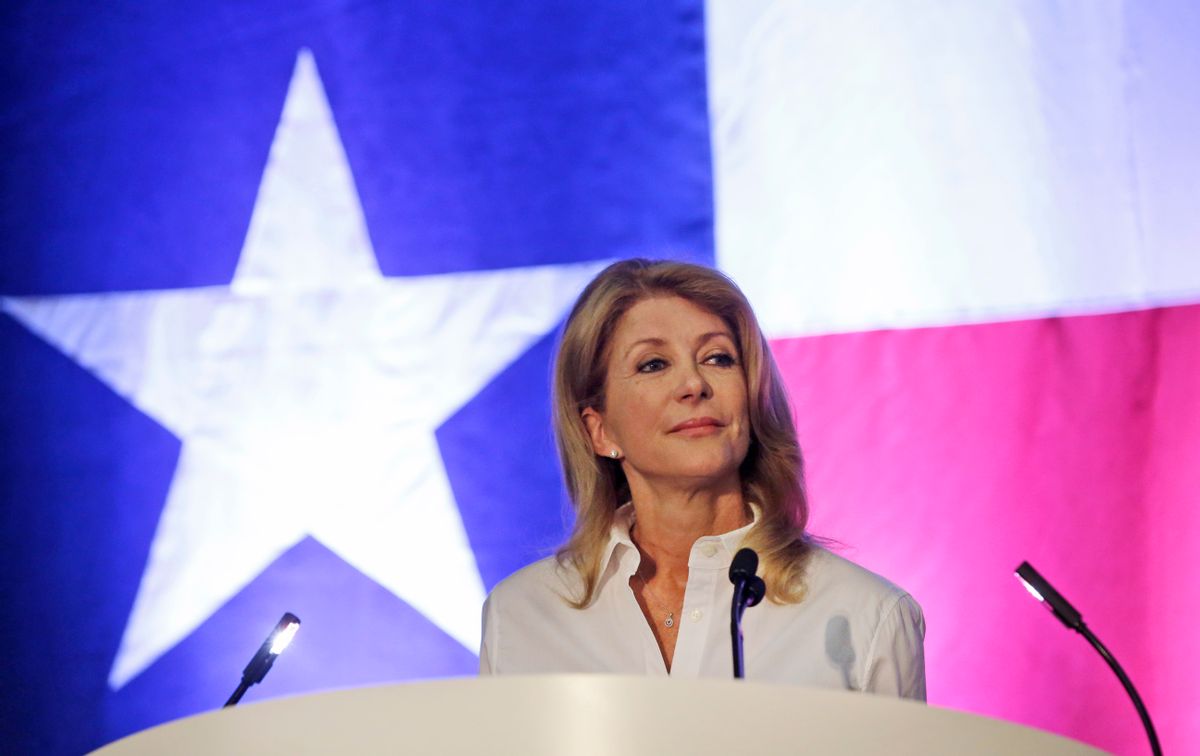 I am well aware that Wendy Davis lost the Texas governor's race by a wide margin. It's salt in a very personal wound. Her campaign meant a lot to me, and to so many other Texas women -- thousands of whom stood in line for hours to cast their ballots in support. Greg Abbott won anyway, and he won by a lot. But he didn't win by a lot across the demographic landscape.

I went to the Texas Tribune first for a dissection of the election results, and one piece of information struck me as particularly... wrong. The Tribune cited CNN exit polls to illustrate the landslide, saying Abbott "beat Davis by lopsided margins with white voters (72-27), men (65-34) and women (52-47). Davis beat Abbott among Latinos (57-42) and African-Americans (93-7)." Last time I checked, though, there were thousands upon thousands of women in Texas considered Latina and African-American -- what about their votes?

As RH Reality Check's Andrea Grimes reports, their votes were solidly in Davis' favor: 94 percent of black women and 61 percent of Latinas voted for her. Only 32 percent of white women did. That's certainly not enough women to say that Abbott won the whole gender (though that's a ludicrous statement in the first place). It seems to be enough, though, to result in the erasure of votes from women of color, Grimes notes:

You’ll hear that Greg Abbott “carried” women voters in Texas. Anyone who says that is also saying this: that Black women and Latinas are not “women,” and that carrying white women is enough to make the blanket statement that Abbott carried all women. That women generally failed to vote for Wendy Davis. As if women of color are some separate entity, some mysterious other, some bizarre demographic of not-women. [...]

Once more, with feeling: Greg Abbott and the Republican Party did not win women. They won white women. Time and time again, people of color have stood up for reproductive rights, for affordable health care, for immigrant communities while white folks vote a straight “I got mine” party ticket—even when they haven’t, really, gotten theirs.

Grimes goes on to deride what she calls the "crisis of empathy" in white Texas communities, a crisis that on many days seems to be the singular likely explanation for the state's political climate. In my experience, the empathy gap isn't uniform across the state; in the week leading up to Davis' famous filibuster and during the filibuster itself, for example, the crowd of orange-clad supporters featured innumerable white, upper-middle class city-dwellers protesting a law that would, in practice, leave them unaffected. (The restrictive abortion law that eventually passed, HB 2, disproportionately affects women of color.) But that was in Austin and that was last year; it wasn't on election day, when summoning that same empathy still mattered, and mattered in more places than Texas' notoriously navy blue capital.

Voting in Texas isn't about parties. It's about priorities. As a recent history of conservative leadership has shown what Abbott's impending conservative leadership promises to bring: life-altering disparities and inequality as the norm. Healthcare for some. Good schools for some. Reproductive autonomy for some. But for the others? Well, we didn't vote for them. As Grimes puts it, "We chose ourselves, and only ourselves."

The rest of Grimes' essay, "White Women: Let's Get Our Shit Together," is poignant and, sadly, so necessary. Read the whole thing at RH Reality Check.