The GOP controls Congress, and a climate denier holds the Senate's top environmental gig. Could it get any worse? 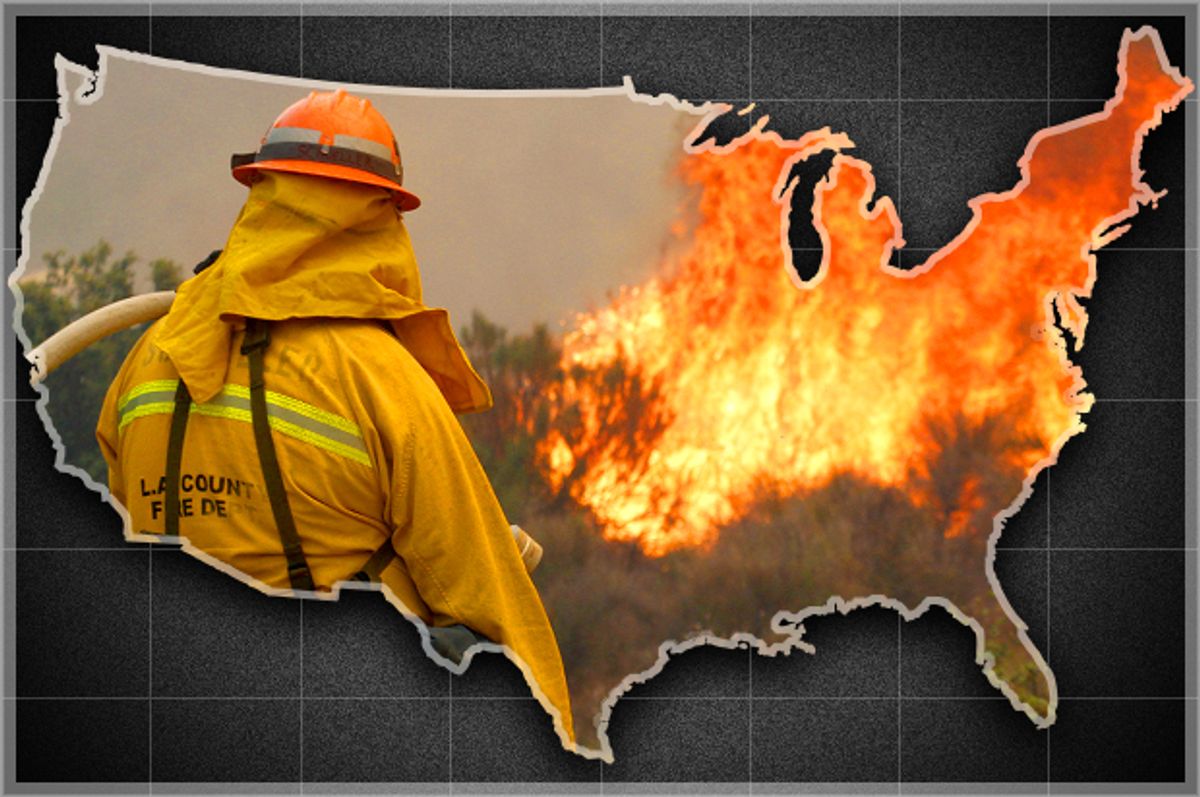 Did you hear that? That was the sound of the planet sighing.

With one disastrous Election Day, climate deniers and dirty-energy proponents have seized control of Congress, and the effort to mitigate global warming, already a formidable battle, just became that much harder to pull off.

On a federal level, things are definitely going to get bad. Really bad. But hey, sometimes you have to hit rock bottom before things can get better. Speaking with reporters, David Goldston, the director of government affairs for the Natural Resources Defense Council, pointed out that the Republican-controlled House has managed to do a lot of truly insane things that flew under the radar because they had little chance of making it through the Senate. One example: They passed a measure that would basically bar the U.S. military from acknowledging climate change -- even though the Pentagon itself identifies climate change as a legitimate, and immediate, threat to national security. Now that such measures have a legitimate shot of becoming a reality, Goldston said, “perhaps the silver lining is that the public will now see what the Republican agenda actually is and what’s at stake here."

It's a small comfort for now, but it could bode well for 2016. Remember that Americans, who are sure to make a more representative showing come that year, do broadly support climate action: Across party lines, a strong majority of people support the idea of regulating carbon pollution from power plants, as the EPA is currently in the process of doing. Tuesday was a bad day for Democrats, said Elizabeth Thompson, president of the Environmental Defense Action Fund, but it "was not a referendum on climate or rejection of environmental protections that Americans overwhelmingly support."

If you want to get an idea of how bad things could actually get, look at the two countries where climate denialism has become official government policy. Under the leadership of Prime Ministers Tony Abbott and Stephen Harper, respectively, Australia and Canada have emerged as the leading villains in the fight to mitigate climate change in both word and deed. Abbott, who once called climate science "absolute crap," showed just how serious he was by rolling back the country's carbon tax, even though it was working. Under Harper, meanwhile, Canada's climate policy has gone absolutely nowhere, and the prime minister has also managed to make climate change taboo, ushering in an age of media censorship and "muzzling" climate scientists who attempt to communicate their findings with the public.

This is the kind of stuff that goes beyond partisan politics or a short-sighted focus on economic growth to something approaching a genuine desire to watch the world burn. And to be sure, it's terrifying to see similar lunacy rising to prominence in the American government. The man slated to gain the Senate's top environmental gig, James Inhofe, sees little difference between the EPA, which he'll be overseeing, and Nazis; and has called climate change not just a sham, but the "greatest hoax ever perpetrated on the American people." America doesn't have something so glorious as a carbon tax to repeal, but it does have the EPA's proposed rule to limit emissions from coal-fired power plants. Almost immediately following the election, Sen. Mitch McConnell, who's evasive on climate change but bullish on coal, reiterated his plans to fight it. And we've already seen where the House's priorities lie.

But we do still have a president who wants to leave a climate legacy; who's strong in words and has some potential to take action. Even with this increased opposition in Congress, Obama's hands aren't entirely tied. White House press secretary Josh Earnest confirmed as much Thursday: “There are too many Republicans in Congress who even deny the basic scientific fact that climate change is occurring and something that policymakers should be concerned about,” he told reporters, “so the president will use his executive action to take some additional steps.”

The president's work can extend beyond just defending the policies we already have, the NRDC's David Goldston said. He still has to see through the implementation of the power-plant rule, and there are proposals to regulate pollutants like ozone and methane that remain to be addressed. Simply carrying out his current climate agenda, according to Goldston, would be an important accomplishment.

Conceivably, that could all fall apart. The absolute worst-case scenario for the U.S. over the next two years, according to Daniel Farber, the co-director of University of California at Berkeley's Center for Law, Energy, and the Environment, would be for Republicans to "attach a rider eliminating EPA jurisdiction over greenhouse gases to some kind of must-pass legislation, pick up five or six Democratic votes to get through to the Senate, and then put Obama in a position where he feels he has to sign it." That'd be a disaster both for America (for someone who says he doesn't want to force a government shutdown, McConnell's embracing a pretty solid way of forcing a government shutdown) and on a global scale as well. As international climate negotiations get underway, the world's nations are all looking to one another, and especially to the U.S., to see whether they're serious about reducing emissions. If Republicans managed to do enough to undermine the president's climate action plan, said David Doniger, the policy director for the NRDC's climate and clean air program, the entire effort could collapse.

Deep breaths: No one really thinks things will get that bad. Farber pointed out that the new senators replaced the very Democrats who'd have been most likely to go along with them. More plausibly, he said, Republicans might force through a delay, but "unless Obama just caves under pressure, I don't think they can actually do a lot of direct harm to the EPA program." The environment is sure to take a thousand smaller hits: Republicans have all sorts of fun ways to impede, defund and otherwise mess with environmental regulations. They can also use a similar rider strategy to push through approval of the Keystone XL pipeline -- likely to be one of their first orders of business -- and it's unclear whether Obama is going to live up to his word and stop it. But with his core policies in place and, we can hope, his continuing to be vocal about the need to address climate change, the U.S. just might be able to hobble through this, and still set some sort of positive example for the rest of the world. We're not Canada ... yet.

But we are facing a moment of reckoning. The midterm elections were a story with "some pretty disturbing elements," as Michael Brune, executive director of the Sierra Club, put it. "There’s no way to dance around the issue that in too many races, we lost good allies, climate champs, clean energy champions, and we’ll see those people being replaced by folks who stand against our values." Especially considering the monumental task that lies ahead of us if we want to avoid the "severe, pervasive and irreversible” ass-whooping that's coming our way, those are values we can't afford to abandon.