"Clueless, lifeless zombies": Why Chris Hayes is right about Democrats, principles, and fighting back 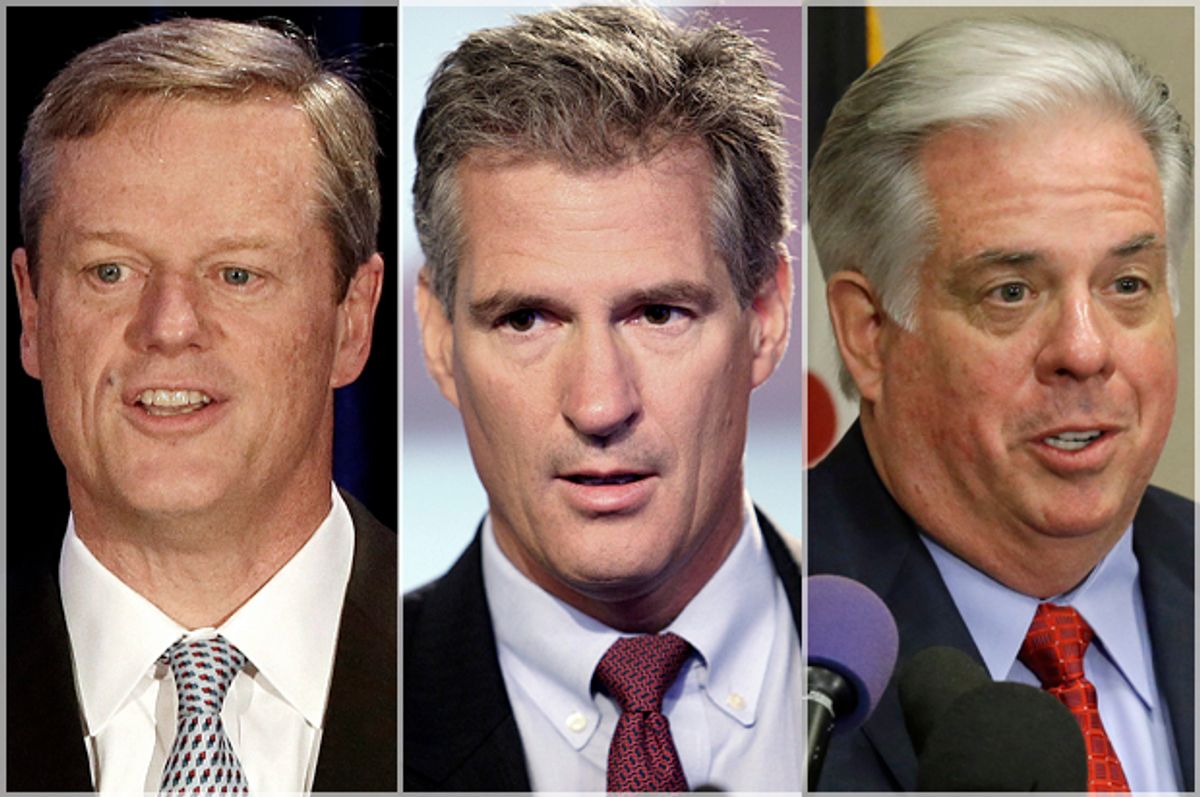 The morning after their humiliating defeat, Democrats looked out at a landscape strewn like a Civil War battlefield with the corpses of their dead. This election exposed their weaknesses, shredded their alibis and cast doubt on the notion that there was ever such a thing as a blue state. New England is a case in point. In 2008 and 2012 Barack Obama swept the region. On Tuesday it went absolutely haywire.

In Maine, right-wing crank Paul Lepage won in part due to a ballot question on bear baiting. Massachusetts Democrat Martha Coakley lost to a guy who wept while telling a heart-tugging story he’d apparently made up. Connecticut’s Dannel Malloy squeaked past a study in political ineptitude. Rhode Island Democrat Gina Raimondo won a three-way governor’s race with 41 percent of the vote. (Robert Healey, founder of Rhody’s Cool Moose Party and a dead ringer for Mister Natural, got 20 percent) In the New Hampshire Senate race, likable centrist Jeanne Shaheen was nearly knocked off by carpet-bagging lightweight Scott Brown.

And so it went everywhere. Democrats must now navigate the stages of grief, a tough task for a party so prone to denial. On MSNBC, Chris Hayes argued that Democratic candidates erred in running away from Obama. So did an indignant Al Sharpton and even Republican Joe Scarborough. Many liberal pundits had urged Democrats to stand by their man. Paul Krugman recently called Obama “one of the most consequential and, yes, successful presidents in American history.”

I think they’re all wrong. Obama left the Democrats in Congress long before they left him. They know their districts and states better than any pundits do and only bailed on Obama when voters started bailing on them, by which time it was too late. Their real mistake was failing to speak up years ago when Obama abandoned many of their party’s principles, or even to realize he’d done it.

The MSNBC analysis is part of a larger fallacy; that the problem is merely tactical; a matter of message, not policy. The worst thing about the theory is how it disrespects voters; if only we had better slogans, they’d appreciate all we’ve done for them. The condescension alone is enough to blow an election.

Americans can feel the vital organs of their democracy shutting down. They see the stock market surge and their prospects dim. They look out on the world and are justly frightened. They ask who will clean up politics, shore up the middle class and make them safe. They want answers. If Democrats had some, they’d have won. The election has many lessons for them but until they pierce their denial they can’t absorb them.  Among the more obvious:

Money can’t save them. This year’s spending broke records. Republicans had an edge, but while the Supreme Court has made it impossible to trace all the cash, it appears their advantage was significant but not overwhelming. In North Carolina and Colorado, Democrats outspent Republicans and lost anyway.

The Center for Responsive Politics reports that in two weeks Colorado TV viewers were treated to 12,211 ads just for their Senate race. Mark Udall’s ads may have cost him his job. Deemed a shoo-in, his use of reproductive freedom as a wedge issue repelled voters of both sexes. Toxic ads meant to drive voters away from his opponent may have driven them away from the polls.

Democratic consultants turn Democratic candidates into clueless, lifeless zombies. Kentucky’s Allison Lundergan Grimes was still alive when she refused to admit what everybody knew. (She voted for Obama) She might have 'fessed up and saved herself, but whoever told her to deny the obvious also told her never to admit a mistake, so she too got buried alive.

What happened to Udall and Grimes happened to scores of Democrats seen as programmed or insincere. Voters backed minimum wage hikes in four red states but it didn’t help the Democrats running in them. Maybe people knew that when Democrats had the votes in Congress to raise it they chose not to. Or maybe they just didn’t hear their hollow, subtly crafted appeals.

Dependent on much the same research data, Democrats and Republicans, despite all appearances, grow closer on many issues. A good example of how this works is public education. In 2000 Al Gore and George W. Bush disagreed strongly on it. Bush wanted to take money out of it to fund vouchers. Gore wanted to put money into it for new schools. Their focus groups told them to talk about testing kids more often so they did. And that’s how we got No Child Left Behind.

Corporate marketing tools are unsuited to progressive politics. By definition, progressives espouse new ideas. Polls and focus groups are inhospitable to new ideas, which often need explanation in order to test well. What polls and focus groups do best is find out what people already think. They’re useful for targeting niche markets or hustling voters with the ‘politics of biography’; useful, that is, until people catch on.

What they don’t do is help build a movement. On the night Chris Hayes lectured Democrats on loyalty, Katrina Vanden Huevel, editor of the Nation and a guest on the show, sensibly observed that the Democratic Party contains many factions that are hard to unify. Yet Democrats spend fortunes on strategies and tools that work by breaking those factions into even smaller pieces till they eventually drift away.

Worse than how they spend money is how they raise it. In 1996 Bill Clinton raised gobs of it for TV. His consultants said the ads were worth every dime, but what raised his numbers was his management of two crises: the Oklahoma City bombing and the government shutdown. He led by 15 points in October when a fundraising scandal cut his margin in half. He kept his job but lost his mandate and maybe Congress. Like Udall, he’d have been a lot better off with a lot less money.

Democrats who ran from Obama may well have hurt themselves with the very Democratic base they needed to turn out. They doubtless hurt themselves with voters who caught them in the act of playing it too cute. Many had run further from their party than Obama has run and long before him. I was put off by the sight of their contortions, but less so when I stopped to think that they only knew two ways to go, theirs and Obama’s and had picked the one they thought might save them.

I’m more put off seeing Obama’s ex-staff selling books by kicking him when he’s down. Progressives shouldn’t do it, but nor should they instruct people to give thanks for programs that didn’t help them. No sense singing his praises to families with mortgages underwater, workers with stagnant wages or middle aged self-employed with higher health care premiums. The only way to reach them is by finding a problem they really care about and fixing it.

Obama’s failings are those of a generation of Democrats whose flaw is not how they campaign but how they govern. The only problem with their ‘message’ is that they often don’t mean it. They’re no more apt to change than the donors and consultants who hold their reigns are apt to let them. Since they’re too afraid to emancipate themselves others will have to do it for them, if necessary by primary.

Those possible ‘others’ are mighty disaffected. Do they still think the Democratic Party worth the time and effort that it takes to write a new agenda, build a new movement and challenge old leadership? I don’t know that they do. I only know that I’ve spent my life in that party and that nothing short of its utter transformation can save it now.