"I'm going to do everything I can to try to stop” the EPA, the soon-to-be Senate majority leader said 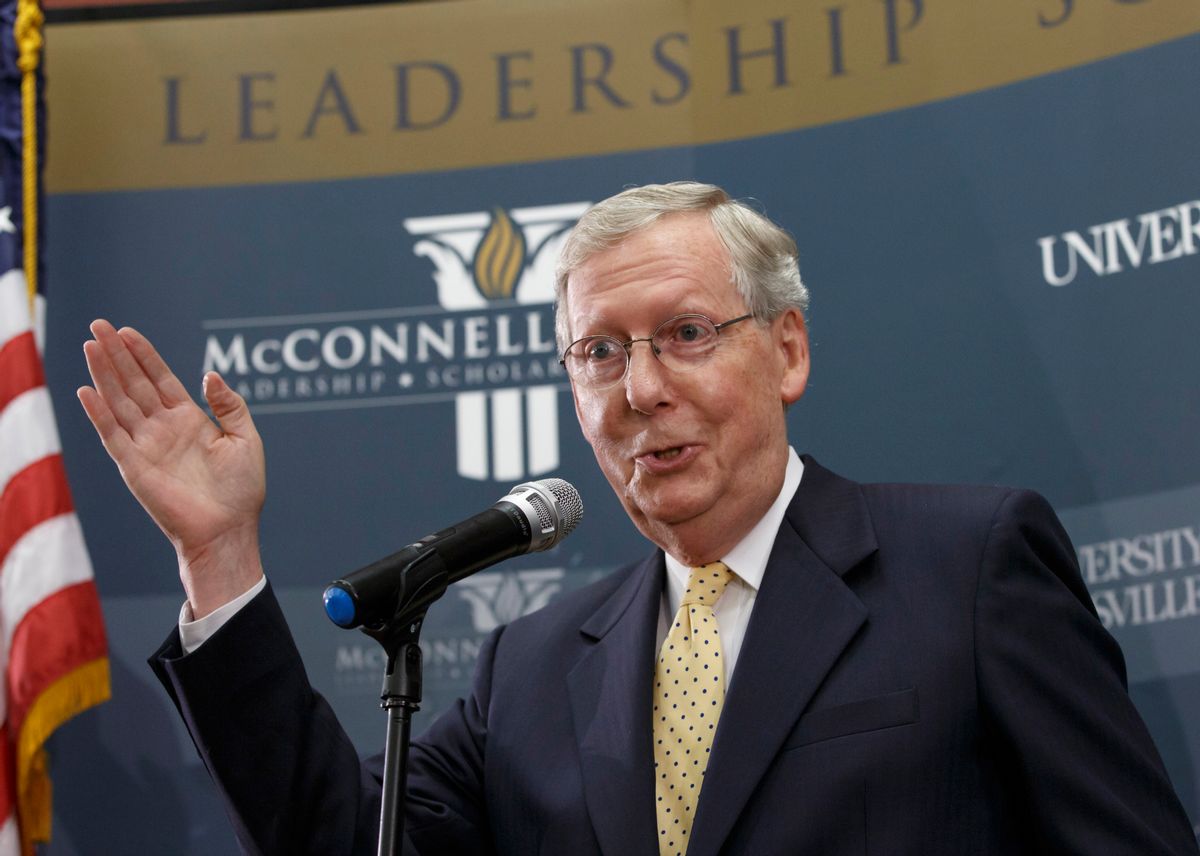 FILE - In this Wednesday, Nov. 5, 2014 file photo, Senate Republican leader Mitch McConnell of Kentucky holds a news conference on the day after the GOP gained enough seats to control the Senate in next year's Congress and make McConnell majority leader, in Louisville, Ky. Economists acknowledge that the list of options is limited but say there are several steps President Barack Obama and Republicans in Congress can take to further invigorate the economy. (AP Photo/J. Scott Applewhite, File) (AP)
--

Mitch McConnell is drawing his battle lines, and as feared, it's bad news for the planet.

In his first one-on-one interview after Republicans took control of the Senate, the soon-to-be majority leader told the Lexington Herald-Leader that his No. 1 priority is "to try to do whatever I can to get the EPA reined in."

Specifically, McConnell said that he plans to go after the agency's plan to limit greenhouse gas emissions from coal-fired power plants, saying he feels a "deep responsibility" to stop it from being implemented -- a plan also known as the absolute worst-case scenario for U.S. climate action.

"I'm absolutely convinced from the people I talk to around the country, not just here but around the country, that coal has a future," McConnell, who refuses to definitely acknowledge the existence of climate change, said. "The question is whether or not coal is going to have a future here. It's got a future in Europe. It's got a future in China, India, Australia. But not here?"

"It makes me very angry," he added, "and I'm going to do everything I can to try to stop them."

McConnell's made it clear for some time now that "whatever he can" means attempting to force through restrictions on the Obama administration's policies by attaching riders to spending bills. He reiterated that to the Herald-Leader: "It will be hard because the only good tool to do that ... is through the spending process," he explained, "and if [President Barack Obama] feels strongly enough about it, he can veto the bill."

Speaking with reporters Thursday, David Goldston, the director of government affairs for the Natural Resources Defense Council, expressed optimism that the president would do just that, pointing out that Obama has refused to give in to this method in the past. A stand-off could lead to a government shutdown, something that McConnell claims he won't let happen. It remains to be seen if he'll be true to his word -- nonetheless, things are all but guaranteed to get ugly.