There was a huge political story about GOP extremists taking over the party this cycle. Instead, we were told this 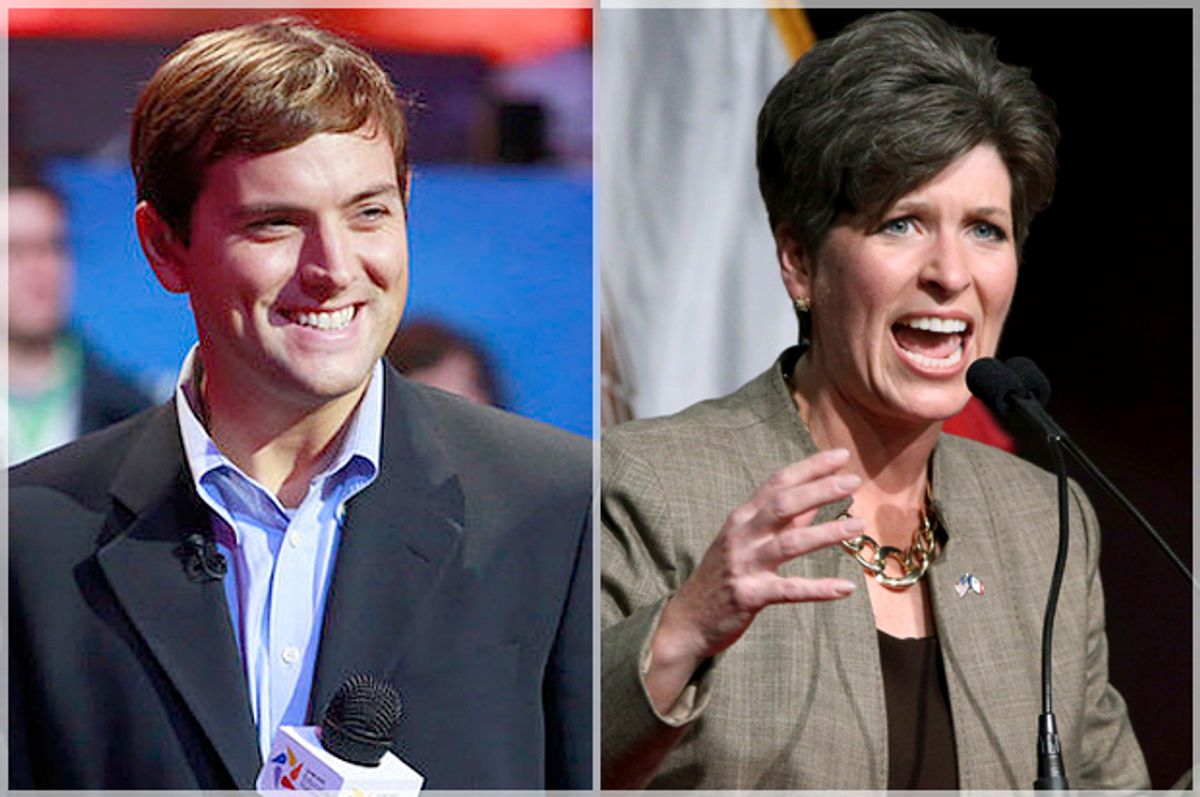 They've sent Luke Russert into the field. Yes, you read that right. Rather than just exploiting his very special gift for repeating the conventional wisdom he hears in the halls of the Capitol building, he's now reporting out in the real world. A couple of weeks ago they seasoned him by having him do a stand-up in front of an airport terminal to report on Ebola. And then they told him to pack up his "sage of Capitol Hill" act and head out to Iowa.

Being a reporter of great depth and insight, upon landing in Des Moines, he managed to immediately glom on to a prevailing story line, which he repeated over and over again. As Talking Points Memo pointed out in this piece, Russert blew into Iowa and serendipitously discovered that the likely winner of the race he'd been assigned to cover in the last two days of the election was also destined to be the newest Kingmaker of the Republican Party, the fantastically exciting new GOP politician named Joni Ernst. Once he discovered how "charismatic" Ernst was it was obvious there was absolutely no need to discuss the issues in the race or the more general state of politics in the state. Ernst was "riding the momentum" of her charisma to victory and we really didn't need to know anything else about it.

In fact, he skipped right over the race itself and moved on to declare her the GOP's "kingmaker" because she's from Iowa and all the candidates will have to come there to kiss her ring. No, he didn't offer any explanation as to why being Iowa's freshman senator made her so powerful to potential presidential candidates; it was apparently assumed that we would all instinctively understand it. Here's a representative example of his commentary:

[She] does not want to have any real connection to Washington, even to the bitter end. On that point, playing Ted Cruz, she doesn't want to do that. One of her selling points is that she's been able to be very conservative but also have an understanding tone. That's what the Des Moines Register wrote about her. All that being said, though, Andrea, as we go into the final hours here on Election Day in Iowa, Ernst is really trying to ride this popular charisma, the personality narrative that she has, being a woman Republican, the first woman from Iowa to go to the Senate, also being a veteran.

She had "popular charisma" and a "personality narrative" of being a woman and a veteran. That's quite an analysis. By the end of the day Russert was declaring his subject (who, for all we know, Russert never met or even observed on the trail before that day) as the "crown jewel" of the new Republican class. Why? Well, you see, she has charisma. And personality. Oh, and she's a woman and a veteran.

In fairness, he wasn't the only one who saw Ernst as the next great Palin hope. I heard at least one pundit say that she was likely to challenge Ted Cruz the minute she gets to Washington. But Russert offered up this vapid assessment without even a hint of substance or real reporting, making him the leader of thin-air cable TV election reporting. Which is saying something.

Without getting into psychoanalysis it's easy to see why Russert is Russert. He was hired by MSNBC in the wake of his venerated father's unexpected passing. He was very young and inexperienced and one got the feeling the network hired him as a sort of grief counseling for themselves and the family. But they did him no favors. They immediately sent him up to Capitol Hill and put him on camera where instead of developing his own craft he aped his dad's Villager punditry, a ludicrous style for such a green kid, based as it was on Russert senior's decades of "old hand" experience in politics. This bizarre "sage" style has remained with him leading to such laughable results as his vacuous coverage of Joni Ernst.

As political scientist Norm Ornstein explained before the election in this Atlantic piece, the political reporting on the Ernst race and others had avoided discussing the extreme views of these candidates in favor of a D.C.-crafted narrative about the Republican Establishment exerting its influence and taking the party back from the extremists. The real story, however,  is that the GOP establishment decided that if you can't beat 'em, join 'em. Rather than allow the Tea Party to challenge them, they went out and found Tea Partyers to groom and train to win statewide office. They smoothed out the rough edges, gave them talking points that successfully covered their more extreme views and otherwise ran "personality" campaigns designed to make the press deaf to the whistles of the Tea Kettles.

It worked beautifully. Nobody outside a few political junkies had any clue that the "charismatic" everywoman from Iowa was a right-wing conspiracy theory extremist who believes, among other nutty things, in the fringe constitutional theory called "nullification," has told audiences that she's ready to take up arms against the government, and thinks a 20-year-old U.N. resolution to encourage nations to use fewer resources called Agenda 21 is a threat to the American way of life. Here's Ernst on the latter subject:

"We don’t want to see a further push with Agenda 21, where the Agenda 21 and the government telling us that these are the urban centers that you will live in; these are the ways that you will travel to other urban centers. Agenda 21 encompasses so many different aspects of our lives that it’s taking away our individual liberties, our freedoms as United States citizens. So I would adamantly oppose Agenda 21. I don’t believe it is responsible, not for United States citizens."

But not to worry, Ernst the charismatic woman veteran will be there to defend you when the jackboots come to force you into the urban collective:

Yes, she is personality plus, that much is true. But unless you are a political junkie scouring the Internet for obscure information you aren't going to know any of that. Ornstein reports :

And Ernst isn't the only one. The reporting on the extremist politics of Tom Cotton of Arkansas and Thom Tillis of North Carolina among others was likewise very short on details about their political philosophies.  As Ornstein makes clear, it wasn't ideological bias that created this narrative, it was a desire among the press (likely pushed pretty hard by the GOP establishment) to write that the "grown-ups" were back in charge. But the truth is that the GOP grown-ups decided that the best way to keep the kids in line is to give them what they want. After all, all the GOP grown-ups really want is to beat the Democrats. If all it takes is a little charm school for Tea Partyers, it's a small price to pay.

The big story of this election night wasn't the new "kingmaker" in Iowa or the (predicted) "wave" of GOP victories or even the fact that Luke Russert has a long way to go before he can be taken seriously as a reporter or a pundit. The real story is that the Republicans quietly doubled down on extremism and backed some very right-wing candidates for office and they won. And that turns out to have been a pretty good call.

As Chris Hayes astutely pointed out in his commentary on "All In" on Wednesday, this election result proves a new theory of party politics in the age of polarization: Obstruction works. He went over the history of the last few years pointing out that contrary to popular myth, the Democratic Senate managed to pass quite a few bipartisan bills, notably comprehensive immigration reform, but the bills all died in the Republican-led House:

John Boehner, the Speaker of the House, made a calculation that the best thing to do was to do nothing. Boehner did not allow comprehensive immigration reform or ENDA to come to a vote in the House because Boehner thought doing so would alienate his base and give the president a big political victory. Let's not forget that Boehner and the Republicans actually shut down the government a little more than a year ago.

But after all this the American people gave John Boehner at least 14 more members of the House making the GOP caucus the largest since 1928. So why, in God's name, after watching all this unfold would Speaker Boehner have any incentive to do anything other than what he's been doing? Or Senator Mitch McConnell for that matter. This is the new logic of obstruction in the partisan polarized era we live in now. It is in the self-interest of political parties not to work together. It is in the electoral self-interest and we saw that born out last night.

Obviously, that's not the kind of feel-good analysis that says the Republicans have all moderated and sent some awesomely charismatic officials to Washington to usher in a new era of bipartisan comity but it's a lot more informative than the stale CW most pundits and reporters were offering up in this election cycle.

The "Sage of Capitol Hill" may be right about one thing, however. The GOP did send a new "crown jewel" to the Senate this week but not for the reasons he thinks. They've realized the value of the Ted Cruz faction to their long-term plans and found some stealth Tea Partyers to join it. "Charisma" had nothing to do with it.