"Why Don't You Play in Hell?": A delirious, hilarious work of Japanese pop genius 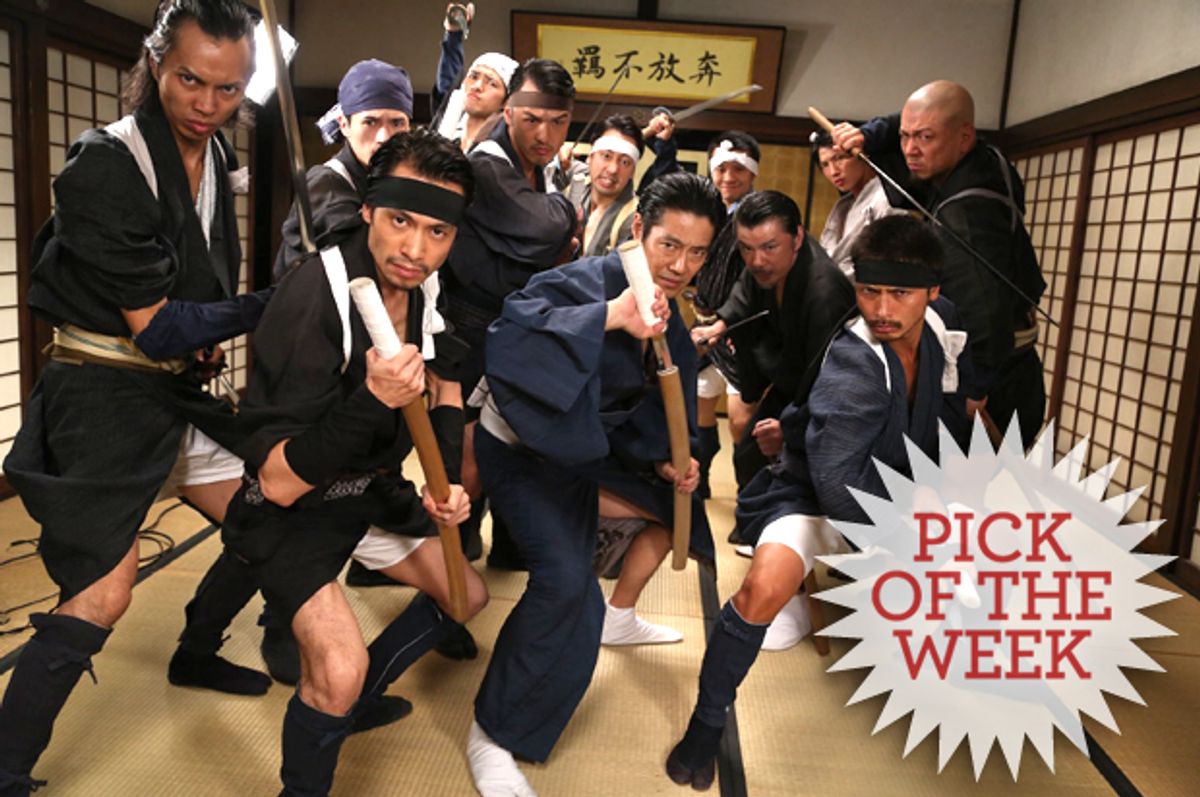 If you’ve never heard of the Japanese filmmaker Sion Sono, you’re not alone. He’s not even especially famous in Japan, except among the kind of geeked-out movie buffs at the heart of his new self-mocking and celebratory opus, “Why Don’t You Play in Hell?” Sono, who is now in his early 50s, is a genuine punk-era renegade who began with underground art-school movies, moved on to famously gory horror flicks and gradually morphed into a crazy-ambitious, genre-busting auteur, an overstuffed and overwhelming pop genius who is part Martin Scorsese and part John Waters, with a dash of Benny Hill. Sono’s films may be grotesque or ridiculous, and careen wildly from slapstick violence to religious passion and existential crisis. But they’re never boring or jaded or rueful or apologetic, after the fashion of way too much Western cinema. He’s a true believer.

“Why Don’t You Play in Hell?” is about lots of things, including a modern-day yakuza war in which one side has adopted the lifestyle and mannerisms of medieval samurai (because they think it’s cool) and a beloved child star from a long-ago toothpaste commercial, all grown up into a Lindsay Lohan-style sexpot and train wreck. It’s so full of sight gags, ludicrous double-takes, hambone parodies of various Japanese film traditions – the abusive, troll-like police detective played by Hiroyuki Onoue is my favorite – splatterific violence and inappropriate musical cues that I can’t begin to list them. But it’s also about passion, in the form of an aspiring young director called Hirata (Hiroki Hasegawa), the central figure in an appealing crew of teenage film nerds called the Fuck Bombers. In a moment of angst, he offers a prayer to the Movie God: Let him make one great movie, and he’ll be willing to die. Is it a spoiler to suggest that 10 years later, when Hirata is an unemployed loser pushing 30 whose great work is a video trailer for a nonexistent martial-arts trilogy, the Lord of Cinema will call his bluff?

It really isn’t, but more to the point Sono is still basically that guy, even after 28 years of filmmaking and two dozen or so feature films, at various levels of professionalism. I don’t know whether “Why Don’t You Play in Hell?” is the great film Sono yearns to make, or even his best so far, but it’s an accessible, hilarious and generally delightful exploration of cinematic dementia that has a good chance of expanding his audience. I have to warn you that when you move on to the advanced course in Sono-mania, things really get nuts. His acknowledged masterwork is the 2008 “Love Exposure,” a triptych about emotional abuse, Catholic theology, the secret world of up-skirt photography and a cult of man-killing schoolgirls. It’s easily one of the weirdest and most memorable films made anywhere in the world during the past decade – and it’s almost four hours long. (I wouldn’t ask for a minute of it back.) It’s easy to find Sono’s symbol-drenched horror movies from the early 2000s, like “Suicide Club” and “Noriko’s Dinner Table,” but then there’s the semi-legendary “Bad Film,” a large-scale action-comedy Sono shot in Hi-8 video on the streets of Tokyo in 1995, and then abandoned. (He spliced together a final version many years later, but I’ve never seen it and no North American release has ever been authorized.)

Back to the task at hand: You’ll figure out right away whether “Why Don’t You Play in Hell?” is the kind of movie you want to watch. There’s no waiting, no slow build, no Malick or Tarkovsky contemplation of nature and the universe. We begin with the aforementioned sickly sweet toothpaste commercial that makes angel-faced Michiko a star, and then with a dreamlike scene of carnage that brings her Shirley Temple career to an end. Michiko comes home to find her parents’ apartment literally awash with blood (a near-quotation from Kubrick’s “The Shining”) and littered with dead yakuza. One is still alive, a handsome young devil called Ikegami (Shinichi Tsutsumi), who tells her the gruesome tale with considerable admiration: He and his mates showed up to put a hit on Michiko’s mob-boss father, but hadn’t contended with the fact that her mom (Japanese TV star Tomochika) is a coldblooded assassin armed with a chef’s knife. (When Mom slices up the first yakuza, you can still see a piece of carrot stuck to the blade.)

Michiko doesn’t seem terribly surprised that her mom has killed several gangsters, but she likes Ikegami and helps him escape. As he drags his bloody carcass down an alley, he encounters the Fuck Bombers and their cameras, who even in their best moments have difficulty separating reality from fantasy, and a cool shot from the prospect of some dude actually dying right in front of them. Fortunately for them, the world does not insist on such distinctions; Ikegami has always known he possessed star potential. Fate being what it is (i.e., absurd), after the 10-year flash-forward all these people will be brought together again, in increasingly improbable circumstances.

Michiko’s slow-burn crime-lord dad, played in delicious deadpan fashion by Japanese movie legend Jun Kunimura (of the “Kill Bill” series, Takashi Miike’s “Audition” and many other films), still yearns to make her a movie star, in order to welcome her mom home from prison. Ikegami, now the boss of the rival yakuza gang with the samurai robes and the faux-medieval castle, has been obsessed with Michiko ever since. In a twist worthy of Shakespeare or a dopey ‘80s comedy or both, adult Michiko (Fumi Nikaido), a walking pile of trouble if you’ve ever seen one, picks a random virgin-loser dude off the street to be her “pretend boyfriend” and cover up all the bad stuff she’s been doing – and as we already know, he’s loved her from afar for years. She passes off this guy, Koji (Gen Hoshino), to her dad as the only director she wants to work with. He doesn’t know the first thing about making a movie, of course, which brings us eventually back around to Hirata, the Fuck Bombers and the unfulfilled promise of the Movie God.

Got all that? Good, because there’s a quiz, although it takes the form of an increasingly hallucinatory and madcap film shoot that sometimes resembles a Tarantino/Miike shoot-‘em-up, sometimes a post-Bruce Lee martial-arts cheapie with a nunchaku-wielding star in a tight yellow sweatsuit and sometimes a mid-’60s samurai epic with people flying through shoji screens. The level of exuberant energy is almost always dialed to 11, with the jokes and action beats and meta-movie references flying so fast you can’t keep up with them, and I won’t deny that it’s excessive. Watch five minutes of “Why Don’t You Play in Hell?” and you’ll swear it’s the greatest thing you’ve ever seen. Over the course of two hours plus, it’s a bit much – or for some viewers, a whole lot too much, like an entire Japanese action movie made by Bugs Bunny. But Sono is so pure of heart, so full of enthusiasm and insane imagination and unwavering loyalty to the movie gods, long after the rest of us have stopped believing, that I forgive him everything. He’s still alive, so the great work is still coming.

“Why Don’t You Play in Hell?” opens this week at the IFC Center in New York and the Alamo Drafthouse South Lamar in Austin, Texas. It opens Nov. 14 in Dallas, Houston, Kalamazoo, Mich., Kansas City, San Antonio and Columbus, Ohio; Nov. 21 in Lubbock, Texas, and Phoenix; Nov. 26 in Nashville; Dec. 5 in Denver; and Dec. 19 in Los Angeles and Portland, Ore., with more cities to follow.