"We need to embrace the energy revolution," Mitch McConnell declared this week. Here's what that really means 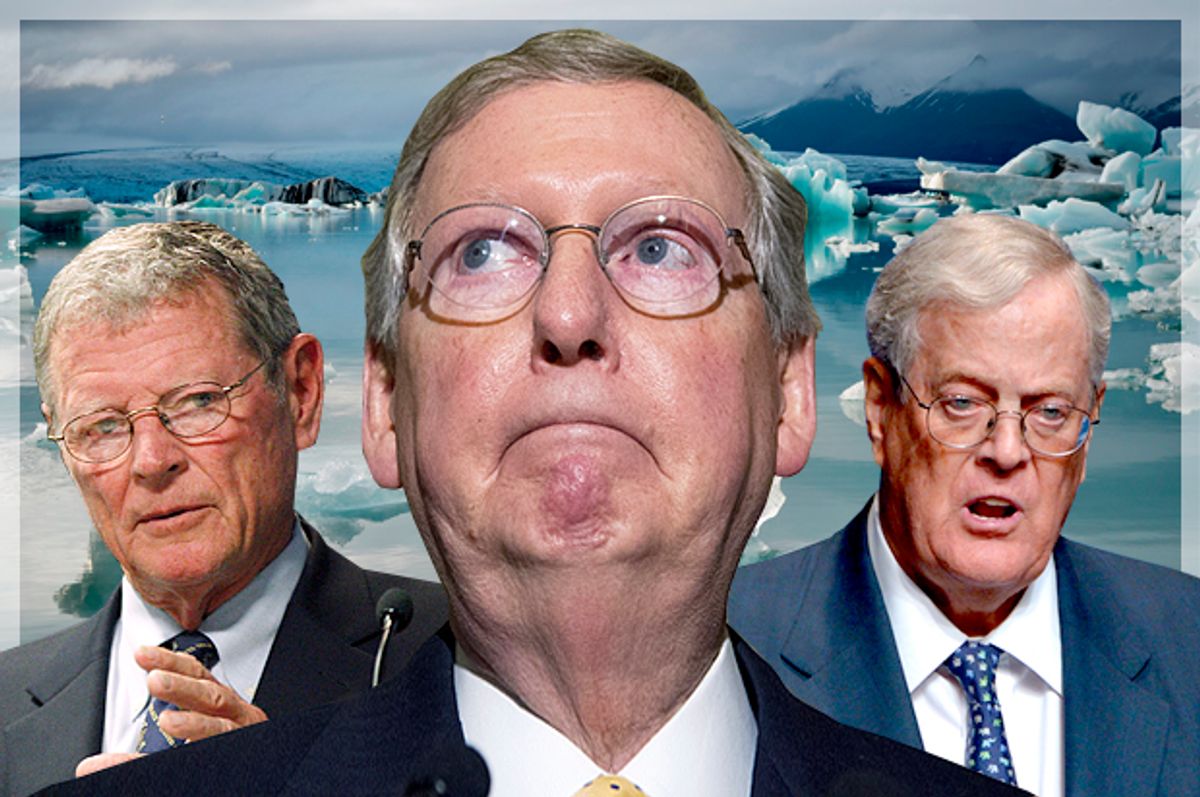 The GOP had barely declared victory after its shellacking of Democrats on Tuesday before they started rolling out plans to melt the Earth.

It was already clear that a Republican victory would doom efforts to do something about climate change. After all, Oklahoma's Jim Inhofe, a climate change denier, is expected to chair the Environment and Public Works Committee.

Moreover, the way the GOP won should have predicted that a victory would accelerate the burning of fossil fuel. After all, the oil magnate and climate change denying Koch brothers provided huge dark money backing for GOP candidates.

But in a press conference on Wednesday, Mitch McConnell -- who will become majority leader in January -- made it clear how central plans to burn more fossil fuels are to the Republicans. McConnell explicitly mentioned forcing the president to approve the Keystone pipeline. But he also envisioned something more. "We haven't had an energy bill in seven years," McConnell said, "we need to embrace the energy revolution that's going on in our country, promote it."

That might suggest McConnell envisions easing already inadequate rules on fracking. Coming from a coal-state senator, it also might mean efforts to make coal competitive again; in his presser, McConnell claimed Obama had launched a war on coal.  Republicans have always wanted to open up the Alaska National Wildlife Refuge for drilling. And as David Dayen wrote in Salon earlier this week, Republicans may be disinclined to extend tax credits on solar panels (Dayen also predicted the Republicans would emphasize trade deals, which is another item McConnell confirmed he will do).

McConnell also made it quite clear the GOP Congress will push for deregulation (which is predictable, given how centrally involved the Chamber of Commerce was in the GOP victory.

In short, the GOP victory will be a predictable disaster for efforts to rein in America's consumption of fossil fuels and with it efforts to limit the extent of climate change.

Bizarrely, another set of oil oligarchs may be the one thing that can undermine the GOP's Koch-driven madness to burn more fossil fuel: the Saudis.

The Saudis have been forcing a significant drop in the price of oil for months. In fact, they dropped prices in the United States on election day. If oil remains at $75 a barrel, it would take significant subsidies to make fracking, coal and tar sands production competitive.

Does Mitch McConnell intend to subsidize fossil fuels even as he rolls out what he implied would be huge tax cuts for corporations?

However McConnell plans to force the hand of the market, Republicans will just be competing over which oligarchs get to sell the fossil fuels we'll all burn.

The voters in Tuesday's election were -- as midterm races usually are -- comparatively old, with 37% of voters older than 60, according to an NBC exit poll. Those voters won't be around when the full effect of the policies the Republicans are about to implement will be felt.

But make no mistake. This Republican congressional majority will kill our planet.