Where Obama went wrong: How failing to "seize the radical moment" explains his terrible week

As his presidency once again teeters on the brink, it's time to look seriously at how it became undone 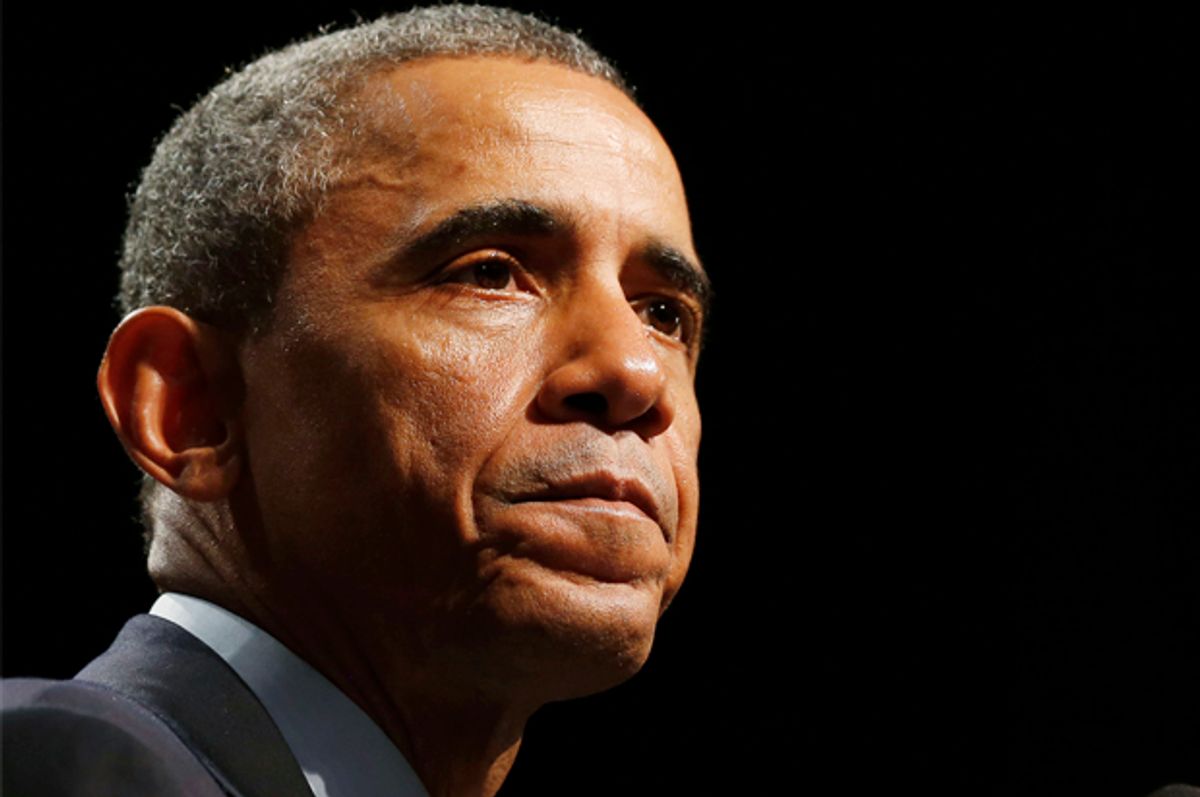 For reasons largely beyond his control, Barack Obama has experienced more adversity and upheaval during his five-plus years as president than most of his predecessors. (In fact, when it comes to governing during crisis, you could argue that only a few others, like Abraham Lincoln and Franklin Roosevelt, had it worse.) Still, even though the president has already had more than his fair share of bad weeks, the past seven days or so have to rank among the administration’s very worst.

Obviously there was his party’s failure during Tuesday’s elections, which handed full control of Congress (and many state governments) to the GOP. That was awful enough to inspire the Washington Post’s E.J. Dionne to describe 2014 as even worse for Dems than the disaster of 2010. But there was also the news that the conservative Supreme Court would take a crack at further weakening the Affordable Care Act by striking down its subsidies while also upholding its mandate, which would leave millions of Americans forced to buy insurance without the subsidies needed to make the law work. Put these two things together, and you see an Obama legacy now very much in doubt.

Judging by his post-election press conference on Wednesday, the wave of bad news hasn’t really dampened the president’s spirits. But some of his biggest supporters aren’t nearly as confident that, in the end, everything will work out. For example, Andrew Sullivan, who has long been one of Obama’s most loyal defenders, was utterly baffled by the outcome on Tuesday. In his election-recap post (straightforwardly titled “Where did Obama go wrong?”) Sullivan tries to figure out how, exactly, the man who was so beloved in 2009 had so dramatically lost the public’s favor. He grants that Obama isn’t always the best at messaging and pure politics, but insists that there is no “substantive reason why Obama has lost altitude.”

Ultimately, Sullivan’s piece doesn’t answer the question, opting instead to explain why various decisions the president made were the “least worst” possible. He cites globalization, Islamic extremism, ideological polarization and the increasingly extreme GOP as structural forces keeping Obama from doing much more than he has already. “[Obama] never promised us perfection,” Sullivan writes, “merely endurance and persistence in substantively changing the nation and the world for the better.” Within the political framework of the present moment, Sullivan basically argues, Obama’s accomplished much of what one could realistically expect.

That may well be true. But if Sullivan and his ilk want to understand where the president went wrong, I’d suggest they examine whether, in the present circumstances, Obama’s simply playing the hand he was dealt was enough. For a self-described conservative like Sullivan, who rejects experimentation and wants progress to be orderly and incremental, Obama’s penchant for working from within the system rather than trying to disrupt it is a real plus. A chief question of his presidency, however, is whether this temperamental conservatism was the wrong fit for the current era, when major reforms are so desperately needed.

Perhaps tellingly, this question has hounded left-of-center observers of the president from the beginning. Candidate Obama spoke a lot about “change”; and as an individual he was certainly different from the presidential aspirants that came before. He talked a good game about wanting a “transformational” presidency, too. Being a Bill Clinton-like manager of the status quo, he said, would not be enough. Yet the Columbia- and Harvard-educated Obama was hardly an outsider. He was a striver, a climber, a product of that status quo. He was someone who learned the rules of the game, followed them, and then won. Would he really want to shake things up?

As early as the summer of 2009, Kevin Baker felt ready to answer that question, writing in Harper’s that Obama was too comfortable with the world as it was to push through the dramatic reforms the moment required. Baker even went so far as to compare Obama to Herbert Hoover, a brilliant man whose presidency was a historic failure because, argued Baker, he was unable to recognize the world he’d grown up and prospered in was gone. In retrospect, the comparison to Hoover still feels strained -- even if Obama leaves behind him a GOP Congress and a failed health care bill, he averted economic armageddon, which was more than the 31st president could say. But at least right now, Baker’s prediction that Obama “will fail, because he will be unable… to seize the radical moment at hand” doesn’t sound so dumb.

Baker may have reached his conclusions years ago, but I’m still not ready to declare the Obama presidency a failure. If the Affordable Care Act once again survives the Supreme Court’s conservative majority, that alone will be enough to earn the administration a passing grade. But if the bill is sabotaged by the Court, it will be due in part to Obama’s refusal to, as Baker put it, “seize the radical moment at hand.” Rather than recognize how ideological and partisan realignment and polarization had effectively changed the rules of the Senate, Obama let Senate Democrats waste months waiting in vain for Republican senators to climb aboard. So by the time Scott Brown ended the Dems’ filibuster-proof super-majority, the bill still wasn’t complete.

The short version of what happened next is that Dems in the House passed the unfinished Senate bill, which just so happened to include a poorly written section that Republicans — and now perhaps the Supreme Court — have seized on to destroy the law and make it function as its authors never intended. To be clear, the main villains throughout this potential tragedy are conservatives and Republicans. But a criticism one can fairly level at the president is that he, unlike his counterparts on the right, never recognized and adjusted to the new paradigm. In this way, as well as in many others, he continued to do things as they’d always been done. It wasn’t until the summer of 2011, when Republicans, playing by the new rules, used debt-ceiling brinksmanship to nearly destroy the global economy that Obama finally woke up.

At this point, there is no question that President Obama will fall short of initial expectations. But more than the failure to pass any one particular bill, the disappointment stems from the president’s dogged insistence on being a reformer during a radical era. His inability to see the ground shifting beneath him has much to do with his latest terrible week. I fear that many more like it are soon to come.