The smuggest superhero show on TV: "The Newsroom" blusters into its final season 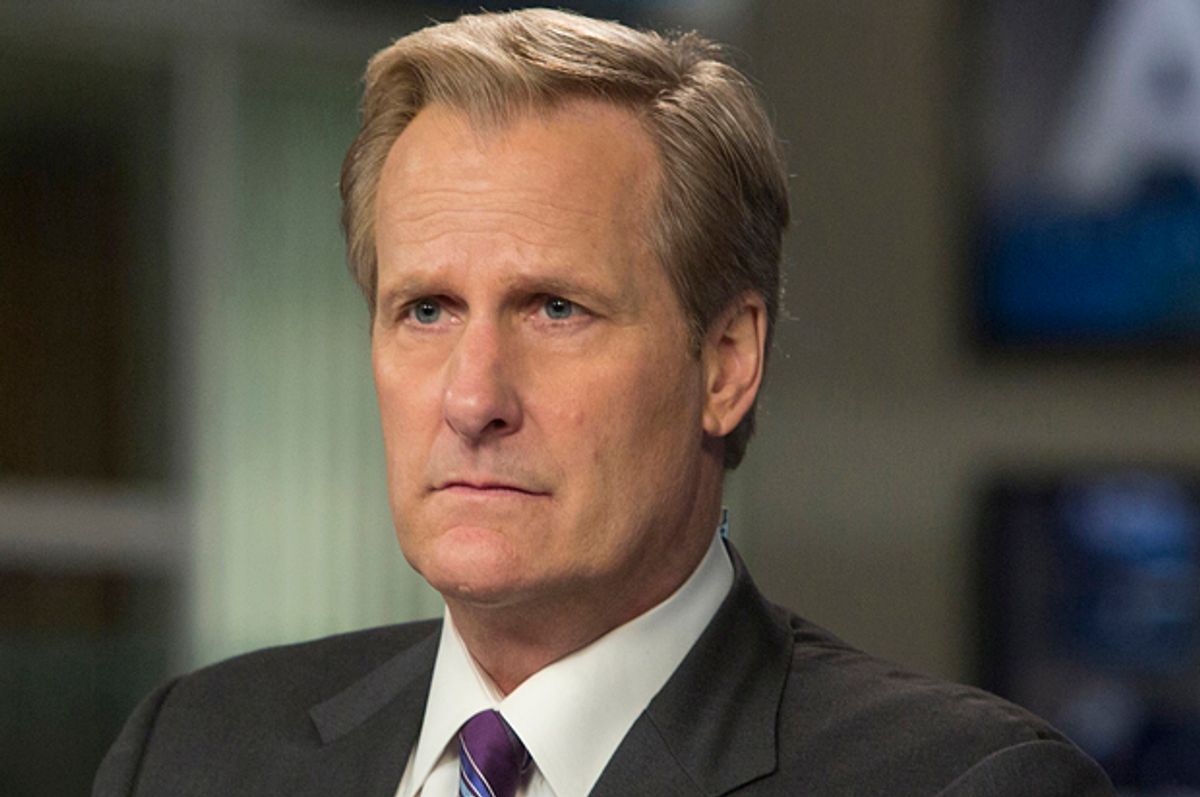 The first word that comes to mind when watching Aaron Sorkin’s “The Newsroom” is “mansplain”; it’s an overused word, to be sure, but nothing else fits quite as well. Aaron Sorkin’s universe, from “Sports Night” to “The Social Network,” is full of fast-talking blowhards, both men and women, who spout statistics, monologue for uninterrupted stretches of time, and cite their collegiate or work credentials with the alarming frequency of people with short-term memory loss. His men are definitely mansplainy — see Sam Seaborn in “The West Wing” telling Ainsley Hayes why she should support the Equal Rights Amendment — and his women are only slightly less so; his overwhelmingly male creative team is behind their every move.

Sorkin’s gotten accolades, and rightly so, for his screenplays that seem to move twice as fast as the competition — fitting two scripts’ worth of dialogue in just one, like Howard Hawks’ screwball comedies. But at the same time there’s something prehistoric about his approach to people, even as his subject matter, from the post-Clinton White House to Facebook to TV journalism in 2012, becomes more and more modern. And all of it is presented with the kind of gleeful preachiness that characterized this indelible screenshot.

“The Newsroom,” which starts its third and last season tonight, has more blowhards than anything Sorkin’s done before — which explains both its appeal and its short shelf life. On one hand, it’s a show full of loud, gesticulating characters making bold romantic gestures in between eating takeout, drinking coffee and saving modern journalism, one headline at a time; it’s hard to look away from the spectacle. On the other hand, it’s a perfect example of the unique form of condescension that can only come from individuals wholly convinced that their way is the right way. Sorkin is a crusader, cranky liberalism is his doctrine, and episodes of “The Newsroom” are the pamphlets he hands out when he goes from door to door.

“The Newsroom” is pretty, slick pandering — fan service, but for policy wonks. It is a derivative superhero story designed to play to a specific crowd. There is no story to “The Newsroom.” There are no characters. There is only puppetry designed to show you, the viewer, exactly what you want. If you agree, what you’re seeing are heroes at work; if you don’t, you’re seeing a caricature of the enemy. “The Newsroom” is not convincing anyone to agree with its ideas. It is merely confirming the beliefs its audience already holds, which means it has a lot more in common than Sorkin would like to admit with the cable news shows he so deplores. For all that I drink the Kool-aid of its liberalism, “The Newsroom” is everything that is wrong with national debate in America, while pretending to aspirations of raising the level of debate.

But there’s this in “The Newsroom’s" favor: While it’s hard to imagine wanting to be friends with either McHale or McAvoy — or attending their wedding with nine bridesmaids and nine groomsmen — there’s no denying that they look very important and busy, running around calling out technical terms to no one in particular. Sorkin puts the romance in workplace romance; everyone’s primary love interest is the job. The most romantic scenes in “The Newsroom” aren’t when one character declares love for another; it’s when the entire newsroom alights upon a story and feels the heady rush of desire to do it right. Characters shout jargon at each other — “Boston affiliate, Boston P.D., FBI, DOJ, Homeland Security, area hospitals!” declaims John Gallagher Jr.’s Jim Harper, in the season-three premiere, after ACN realizes the Boston Marathon has been attacked — and though all this statement of purpose is really wasting time where real journalists would probably just be quietly typing a bunch of search strings into Google, it feels dramatic, important, real. Realer than our own lives.

“The Newsroom” — and Sorkin’s whole oeuvre — works because it makes us feel important. And not just in a self-aggrandizing, pompous way, though it does that, too. Sorkin’s rapid-fire pacing, his jargon, his name-dropping, all combine to create a tantalizing image of a world where everything matters a lot. There are no small stories. There are no meaningless connections. There’s instead a whole universe of seeking and knowing and understanding and doing. And in a world where feeling disenfranchised from your own rights and ignored by your own government, that transmitted feeling of reflected importance is a way of making you, the far-flung viewer, feel like you matter — well, that’s powerful.

I think that’s why “The Newsroom” is a polarizing show: On one hand it peddles empowerment; on the other, it’s pandering. There’s a tension to the show’s appeal, something between annoyance and appreciation, which Richard Lawson explores in his positive review of the third season over at Vanity Fair. It’s “up its own ass,” but “the show is really fun to watch” — maybe the most entertaining show on television.

“The Newsroom” is six episodes away from its series finale — which will be titled, like the-first season finale of “The West Wing,” “What Kind of a Day Has It Been?” The third season starts on the day of the Boston Marathon bombing and delves into a climate-change subplot and a possible espionage charge directed at one of their own, in a clear nod to Edward Snowden. Something is happening in a place called the Republic of Equatorial Kundu, which is not just a fictional country in Africa but in fact the same fictional country in Africa that Sorkin used in “The West Wing.” A bunch of people are in cute relationships. They are all, not coincidentally, very well educated. They are all, not coincidentally, white (Olivia Munn might be mixed-race, but her character isn’t). This show has evolved, but it really hasn’t changed.

Only the first three episodes were sent to critics, and maybe Sorkin will find a way to end “The Newsroom” gracefully. He was able to make “The West Wing” a show about blowhards that were still lovable — Washington wonks who used a wall of words to mask their intense desire for government to be more than just a machine of money and corruption. “The Newsroom’s" blowhards are, by comparison, stilted marionettes. They’re animated ideas more than people (and all at ACN by way of Scotland, if the preponderance of McAvoys and Mackenzies and McHales is any indication).

I’m skeptical, though. “The Newsroom” has a lot of passion and verve to it, but the changes Sorkin has made to the show feel like a somewhat misguided interpretation of what needed fixing. Now “The Newsroom’s" opening credits are sleek and urban, instead of grandiose and full of white men; the first season’s triumphal journalism was replaced with a bit of self-deprecation, the type of narcissism we’re all more comfortable with. It's hard to avoid the creepy sense that HBO’s massaging of the show between Season 1 and 3 was a mission not to soften the superiority complex of "The Newsroom," but instead to modify it so it was more on-brand.