Why the midterm disaster is also terrible news for America's cities

Despite a few high-profile progressive victories, local politics isn't in much better shape than Washington 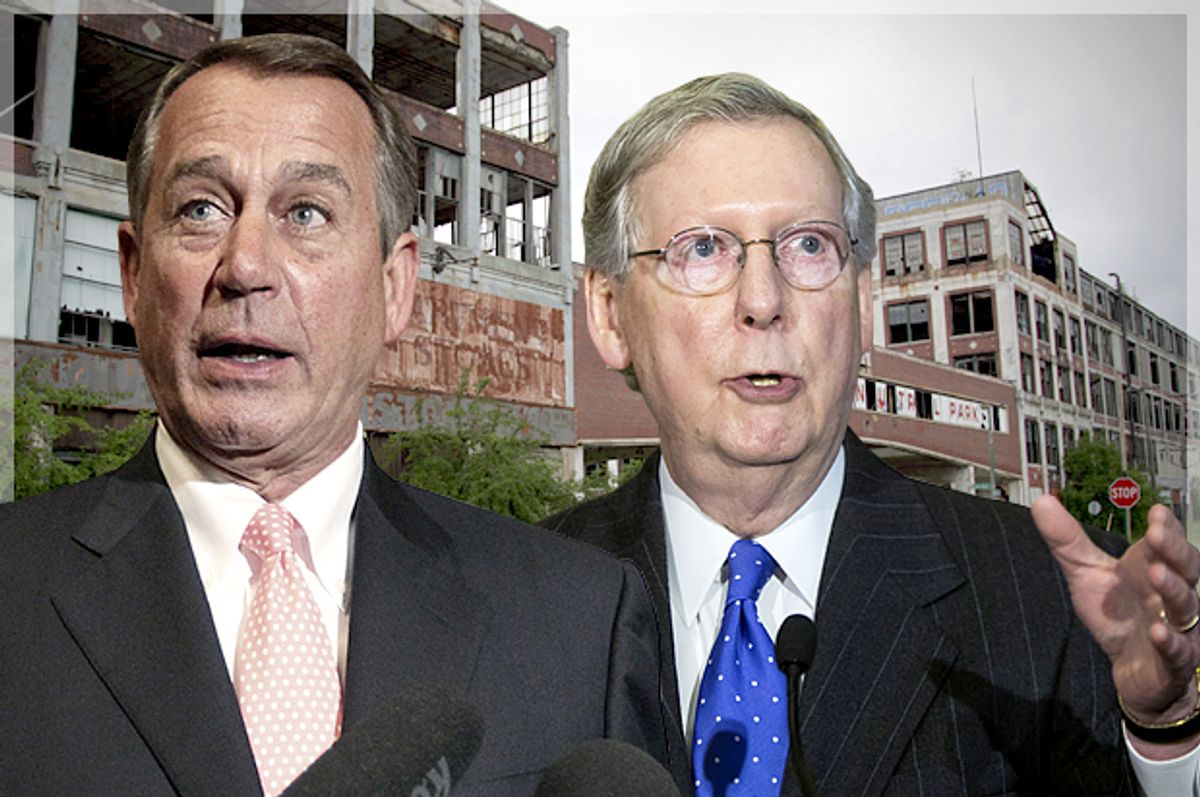 If there was any solace for the left on a historically dismal election night, it was in progressive victories in local politics.

The Senate’s Environment and Public Works Committee will soon be chaired by climate change denier-supporter James Inhofe, the fourth-term Oklahoma Republican. But no one ever called Congress a laboratory of democracy.  Meanwhile, four states that strongly supported Mitt Romney in 2012 — Alaska, Arkansas, Nebraska and South Dakota — passed minimum wage hikes in ballot referenda. Voters in Alaska, Oregon and Washington, D.C., legalized marijuana. The three biggest mayoral elections, in Oakland, California, San Jose, California, and the District of Columbia, were (not surprisingly) won by liberals.

Is this the famed Metropolitan Revolution in action, the progressive fruits of a gradual devolution of authority toward states and cities?

Where the transfer of power to local authority has taken place, it’s voters, rather than their representatives, who are making decisions on taxes, infrastructure and policy. It’s a shift that, while democratic, will have mixed results for urban planning.

At the state level, a few successful left-wing ballot initiatives ought not obscure the fact that Democrats control only eight of the 50 statehouses. The GOP is now in full control of 29 state legislatures, the largest number since 1928. Thirty-two of the nation’s governors are Republicans.

Generally, that’s bad news for cities’ social programs, pension plans and non-automobile transportation. In Florida, Wisconsin and Ohio, anti-rail Republicans were easily reelected. In Maryland, Gov.-elect Larry Hogan is opposed to an expansion of the Washington, D.C., Metro in Montgomery County, and thinks the funds would be better spent on repairing roads and highways.

In New York, the Democrats’ inability to take the statehouse will pose problems for Bill de Blasio. Though the Brooklynite mayor has become an international spokesman for progressive causes in cities, several items on his agenda — such as regaining control over New York City’s rent regulations — will now be out of reach until 2016 at the earliest.

Still, in some ways, cities and counties are taking control of their own policies with an eye toward improving urban life.

These initiatives aren't born of federal grants, or at the state capital, but on the ballot. Election Day is changing: It is no longer merely a choosing of candidates but a nationwide referendum on infrastructure.

Seattle and San Francisco voted to increase funding for transit and alternative transportation; Wisconsin and Maryland opted to secure existing transit funding. Clayton County, in metro Atlanta, will raise the sales tax by a full percentage point to generate money for a bus system. Half of the $45 million the measure is expected to raise will fund regular bus service; the other half will be used for a pending, more expensive project, like commuter rail or BRT.

These victories mark the intersection of two trends, the first in politics and the second in transportation finance. The first statewide ballot initiative wasn’t held until 1904, in Oregon, and after a surge in the 1920s, the method fell away in the postwar era to a low point in 1968. But it has since experienced “a tremendous upsurge in usage,” and it’s now common for voters to find a handful of complex subjects posed as yes-or-no questions on the back of their ballots.

This has coincided with a shift in transportation finance away from user fees and toward dedicated tax sources. Voting to fund specific projects, then, is in part a legacy of the late 1960s, when cash-strapped cities struggled to run transit systems with declining ridership. But it also owes much to the political paralysis around the gas tax, which has historically paid for most of this country’s roads but is now woefully out of date at both the state and federal levels.

Voting on infrastructure has some advantages. It gives projects an immediate, dedicated source of financing, which speeds up progress. Theoretically, it should reduce the viability of special-interest boondoggles that don’t serve a sufficient number of people. By removing politicians from the picture, it produces results that statehouses might not have endorsed.

But the failures of such measures are more interesting and more instructive.

The case of Pinellas County is indicative of the problems with planning by plebiscite.

What should be a regional issue is unwisely decentralized, with power split between voters in Pinellas and Hillsborough Counties. Progress in planning a comprehensive transportation network has therefore been very, very slow. When the M-1 streetcar opens in Detroit in 2016, Tampa Bay, Florida, will be the largest U.S. metropolitan area without rail transit.

Entrusting transportation planning to an up-or-down vote is both simplistic and damaging. For one thing, it’s hard to sum up the nuances of law and design in a ballot question. In the Pinellas case, because a ballot initiative must be restricted to one issue, voters were informed of a new county sales tax to fund transit — but not that it would replace the current property tax.

The proposal itself was obviously flawed. Despite a $1.1 million fundraising campaign and support from Tampa’s three major sports teams, elected officials from both parties, local chambers of commerce, and 16 of the county’s 24 cities, Pinellas voters quashed the proposal by a 24-point margin.

But there’s no reason to think it will now improve as a transit proposal. On the contrary, in a triumph of demagoguery over expertise, the squeaky wheels of Pinellas County will get the grease. That these plans are subject to one-and-done referenda every half-decade (neighboring Hillsborough County failed in 2010, and will try again in 2016) further precludes the gradual fine-tuning that marks sensible transit planning.

When is planning by plebiscite most likely to succeed? Generally, when voters live near the project in question, and when they are wealthy.

Couple those biases with ballot initiatives’ general reliance on the highly regressive sales tax (which now constitutes one-third of California’s local transportation revenue), their myopia in the broader scheme of metropolitan planning, and their vulnerable rigidity (in Austin, the project in question had divided transit advocates based on its route choice), and you start to wonder if planning to the people is such a good idea.