It's been 70 years since we fought a war about freedom. Forced troop worship and compulsory patriotism must end 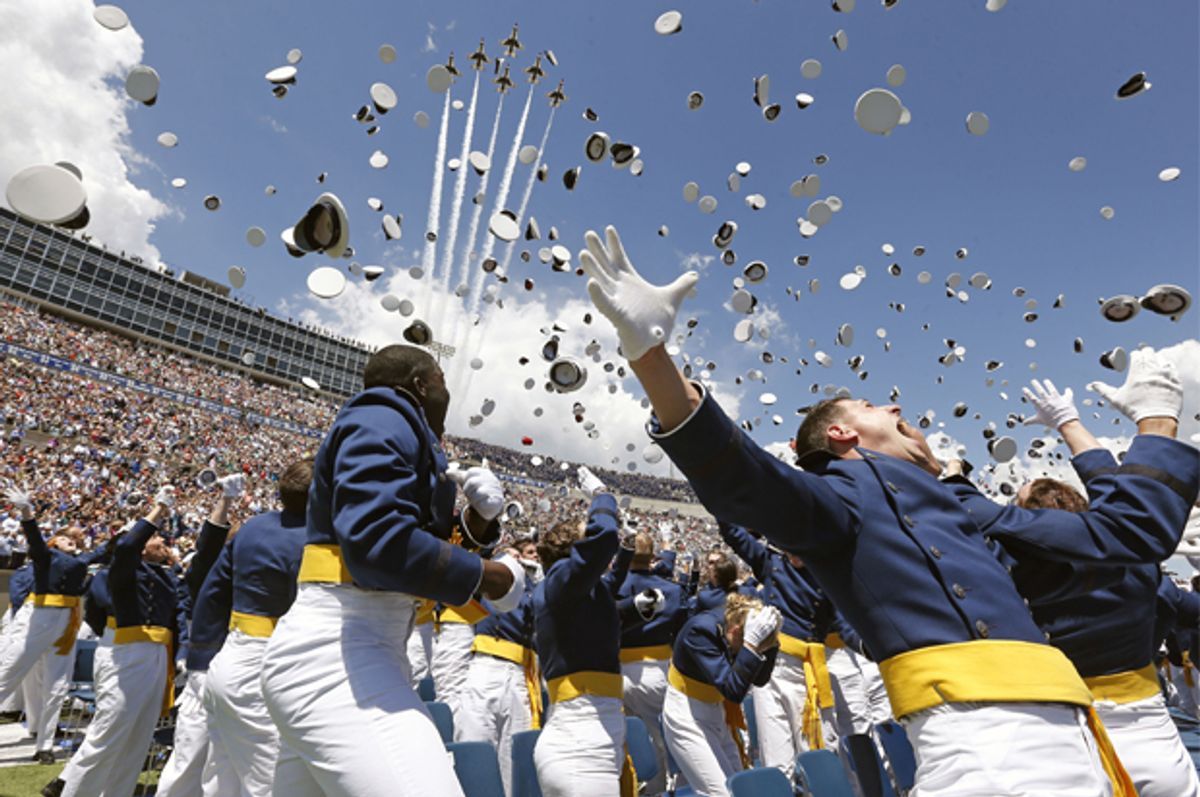 Put a man in uniform, preferably a white man, give him a gun, and Americans will worship him. It is a particularly childish trait, of a childlike culture, that insists on anointing all active military members and police officers as “heroes.” The rhetorical sloppiness and intellectual shallowness of affixing such a reverent label to everyone in the military or law enforcement betrays a frightening cultural streak of nationalism, chauvinism, authoritarianism and totalitarianism, but it also makes honest and serious conversations necessary for the maintenance and enhancement of a fragile democracy nearly impossible.

It has become impossible to go a week without reading a story about police brutality, abuse of power and misuse of authority. Michael Brown’s murder represents the tip of a body pile, and in just the past month, several videos have emerged of police assaulting people, including pregnant women, for reasons justifiable only to the insane.

It is equally challenging for anyone reasonable, and not drowning in the syrup of patriotic sentimentality, to stop saluting, and look at the servicemen of the American military with criticism and skepticism. There is a sexual assault epidemic in the military. In 2003, a Department of Defense study found that one-third of women seeking medical care in the VA system reported experiencing rape or sexual violence while in the military. Internal and external studies demonstrate that since the official study, numbers of sexual assaults within the military have only increased, especially with male victims. According to the Pentagon, 38 men are sexually assaulted every single day in the U.S. military. Given that rape and sexual assault are, traditionally, the most underreported crimes, the horrific statistics likely fail to capture the reality of the sexual dungeon that has become the United States military.

Chelsea Manning, now serving time in prison as a whistle-blower, uncovered multiple incidents of fellow soldiers laughing as they murdered civilians. Keith Gentry, a former Navy man, wrote that when he and his division were bored they preferred passing the time with the “entertainment” of YouTube videos capturing air raids of Iraq and Afghanistan, often making jokes and mocking the victims of American violence. If the murder of civilians, the rape of “brothers and sisters” on base, and the relegation of death and torture of strangers as fodder for amusement qualifies as heroism, the world needs better villains.

It is undeniable that there are police officers who heroically uphold their motto and mission to “serve and protect,” just as it is indisputable that there are members of the military who valiantly sacrifice themselves for the sake of others. Reviewing the research proving cruelty and mendacity within law enforcement and the military, and reading the stories of trauma and tragedy caused by officers and soldiers, does not mean that no cop or troop qualifies as a hero, but it certainly means that many of them are not heroes.

Acknowledging the spread of sadism across the ranks of military also does not mean that the U.S. government should neglect veterans, as they often do, by cutting their healthcare options, delaying or denying treatment, and reducing psychiatric services. On the contrary, if American politicians and pundits genuinely believed that American military members are “heroes,” they would not settle for sloganeering, and garish tributes. They would insist that veterans receive the best healthcare possible. Improving and universalizing high quality healthcare for all Americans, including veterans, is a much better and truer way to honor the risks soldiers and Marines accept on orders than unofficially imposing a juvenile and dictatorial rule over speech in which anything less than absolute and awed adulation for all things military is treasonous.

One of the reasons that the American public so eagerly and excitedly complies with the cultural code of lionizing every soldier and cop is because of the physical risk-taking and bravery many of them display on the foreign battleground and the American street. Physical strength and courage is only useful and laudable when invested in a cause that is noble and moral. The causes of American foreign policy, especially at the present, rarely qualify for either compliment. The “troops are heroes” boosters of American life typically toss out clichés to defend their generalization – “They defend our freedom,” “They fight so we don’t have to.”

No American freedom is currently at stake in Afghanistan. It is impossible to imagine an argument to the contrary, just as the war in Iraq was clearly fought for the interests of empire, the profits of defense contractors, and the edification of neoconservative theorists. It had nothing to do with the safety or freedom of the American people. The last time the U.S. military deployed to fight for the protection of American life was in World War II – an inconvenient fact that reduces clichés about “thanking a soldier” for free speech to rubble. If a soldier deserves gratitude, so does the litigator who argued key First Amendment cases in court, the legislators who voted for the protection of free speech, and thousands of external agitators who rallied for more speech rights, less censorship and broader access to media.

Wars that are not heroic have no real heroes, except for the people who oppose those wars. Far from being the heroes of recent wars, American troops are among their victims. No rational person can blame the soldier, the Marine, the airman, or the Navy man for the stupid and destructive foreign policy of the U.S. government, but calling them “heroes,” and settling for nothing less, makes honest and critical conversations about American foreign policy less likely to happen. If all troops are heroes, it doesn’t make much sense to call their mission unnecessary and unjust. It also makes conversations about the sexual assault epidemic, or the killing of innocent civilians, impossible. If all troops are heroes, it doesn’t make any sense to acknowledge that some are rapists and sadists.

The same principle of clear-eyed scrutiny applies to law enforcement agencies. Police departments everywhere need extensive investigation of their training methods, qualifications for getting on the job, and psychological evaluation. None of that will happen as long as the culture calls cops heroes, regardless of their behavior.

An understandable reason for calling all troops heroes, even on the left, is to honor the sacrifice they make after they die or endure a life-altering injury in one of America’s foolish acts of aggression. A more helpful and productive act of citizenship, and sign of solidarity with the military, is the enlistment in an antiwar movement that would prevent the government from using its volunteer Army as a plaything for the financial advancement and political cover of the state-corporate nexus and the military-industrial complex of Dwight Eishenhower’s nightmares.

Given the dubious and dangerous nature of American foreign policy, and the neglect and abuse veterans often suffer when returning home wounded or traumatized, Americans, especially those who oppose war, should do everything they can to discourage young, poor and working-class men and women from joining the military. Part of the campaign against enlistment requires removing the glory of the “hero” label from those who do enlist. Stanley Hauerwas, a professor of divinity studies at Duke whom Time called “America’s best theologian,” has suggested that, given the radical pacifism of Jesus Christ, American churches should do all they can to discourage its young congregants from joining the military. Haurwas’ brand of intellectual courage is necessary, even among non-Christians, to combat the hysterical sycophancy toward the military in a culture where even saluting a Marine, while holding a coffee cup, is tantamount to terrorism.

The men and women who do enlist deserve better than to die in the dirt and come home in a bag, or spend their lives in wheelchairs, and their parents should not have to drown in tears and suffer the heartbreak of burying their children. The catastrophes become less common when fewer people join the military.

Calling all cops and troops heroes insults those who actually are heroic – the soldier who runs into the line of fire to protect his division, the police officer who works tirelessly to find a missing child – by placing them alongside the cops who shoot unarmed teenagers who have their hands in the air, or the soldier who rapes his subordinate.

It also degrades the collective understanding of heroism to the fantasies of high-budget, cheap-story action movies. The American conception of heroism seems inextricably linked to violence; not yet graduated from third-grade games of cops and robbers. Explosions and smoking guns might make for entertaining television, but they are not necessary, and more and more in modern society, not even helpful in determining what makes a hero.

A social worker who commits to the care and advocacy of adults with developmental disabilities – helping them find employment, group home placement and medical care, and just treating them with love and kindness – is a hero. A hospice worker in a poor neighborhood, providing precious comfort and consolation to someone dying on the ugly edges of American healthcare, is a hero. An inner-city teacher, working hard to give essential education and meaningful affirmation to children living in neighborhoods where bullets fly and families fall apart, is a hero.

Not all teachers, hospice workers or social workers are heroes, but emphasizing the heroism of those who do commit to their clients, patients and students with love and service would cause a shift of America’s fundamental values. It would place the spotlight on tender and selfless acts of solidarity and empathy for the poor. Calling all cops heroes too often leads to pathetic deference to authority, even when the results are fatal, and insisting all members of the military are heroes too often reinforces the American values of militarism and exceptionalism.

The assignment of heroism, exactly like the literary construct, might have more to do with the assignment of villainy than the actual honoring of “heroes.” Every hero needs a villain. If the only heroes are armed men fighting the country’s wars on drugs and wars in the Middle East, America’s only villains are criminals and terrorists. If servants of the poor, sick and oppressed are the heroes, then the villains are those who oppress, profit from inequality and poverty, and neglect the sick. If that is the real battle of heroism versus villainy, everyone is implicated, and everyone has a far greater role than repeating slogans, tying ribbons and placing stickers on bumpers.