A small Massachusetts town could become the first to ban tobacco 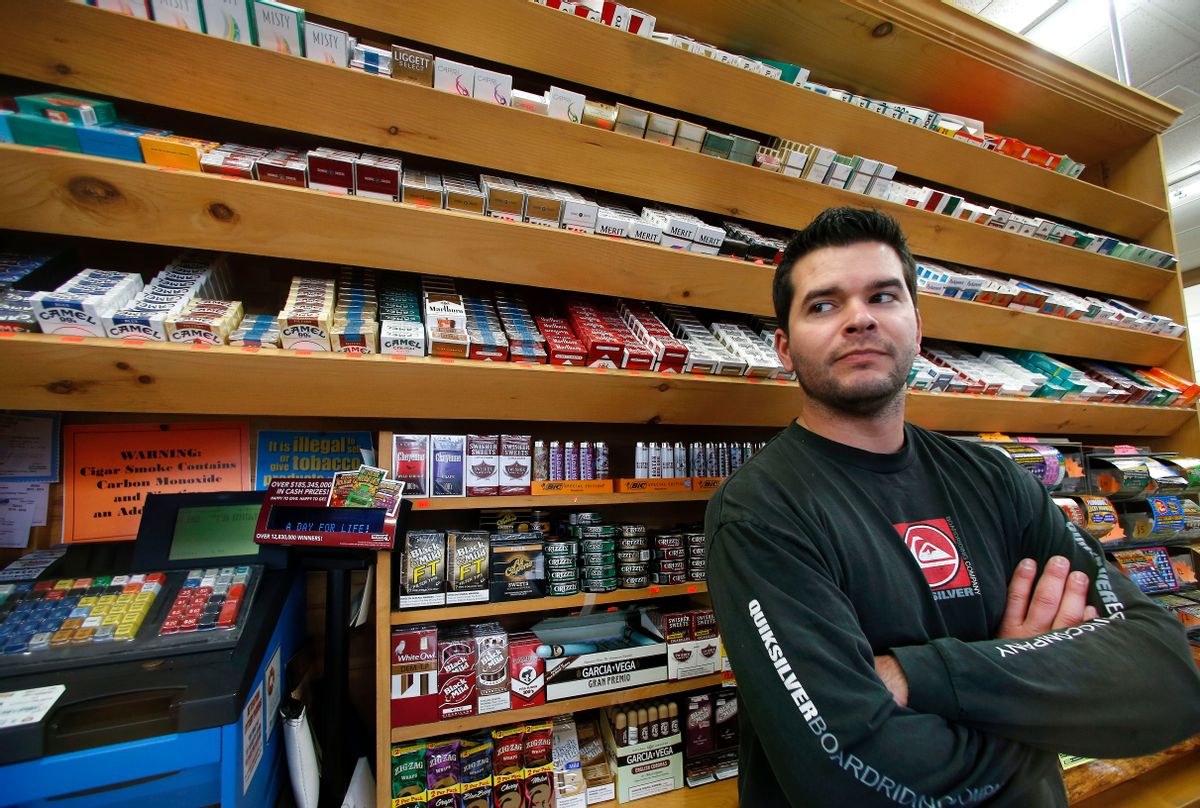 Brian Vincent poses in front of a large display of tobacco products at Vincent's Country Store in Westminster, Mass., Thursday, Nov. 6, 2014. Local officials are contemplating what could be a first: a blanket ban on all forms of tobacco and e-cigarettes, leaving some shop owners fuming. (AP Photo/Elise Amendola) (AP/Elise Amendola)
--

The 7,700-resident town of Westminster, Mass. could ban the sale of all tobacco products, distinguishing itself as the first municipality to pass such a measure. On Wednesday of this week, the local Board of Health will hear public comments on the measure. The ban would include cigarettes, chewing tobacco and e-cigarettes.

"To my knowledge, it would be the first in the nation to enact a total ban," said Thomas Carr, director of national policy at the American Lung Association in an interview with the Associated Press. "We commend the town for doing it."

Massachusetts has already banned the use of tobacco in work places and more than 100 communities in the state have prohibited smoking in public spaces. Proponents of the latest proposal cite increases in the sale of bubblegum-flavored cigars, electronic cigarettes and dissolvable smokeless tobacco as a threat to the youngest residents’ health, especially since smoking prematurely kills 5.6 million adolescent smokers across the country.

“The tobacco companies are really promoting products to hook young people,” Elizabeth Swedberg, health agent in Westminster, Mass. told the Associated Press. “The board was getting frustrated trying to keep up with this.”

While rates of smoking have declined among American adults in recent years, some people say that R.J. Reynolds and Lorillard — the second and third largest tobacco companies in the nation, respectively — will most likely continue a decades-old business model that thrives on the support of young people, also known as “replacement smokers.”

David Sutton, a spokesman for Philip Morris USA's parent company Altria Group Inc., responded to the potential ban: "We believe businesses should be able to choose which products they carry. If the ban were to be implemented, adult tobacco and e-vapor consumers could shift their purchases to neighboring stores. The proposed regulations, if enacted, would fundamentally alter these businesses and would likely cost Westminster jobs."

The Centers for Disease Control and Prevention puts smoking as the number one cause of preventable deaths in the United States, causing over 480,000 deaths every year. More than 10 times as many citizens have died prematurely from smoking than they have in the history of all wars fought by this country, according to the CDC.