Unilever will not abide Hampton Creek, which developed a sustainable mayonnaise alternative 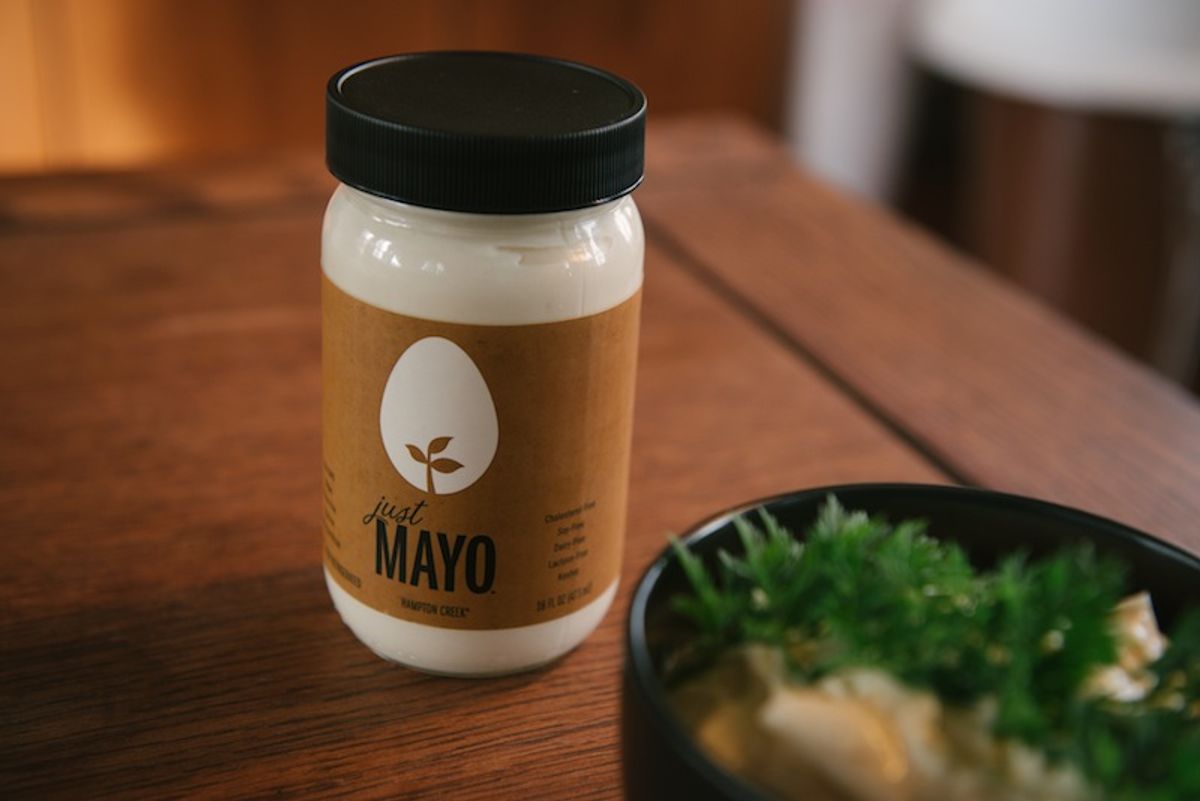 Food industry giant Unilever, owner of Hellman's -- the more or less only name in mayonnaise for the past century -- is so threatened by an vegan mayo substitute that it's suing the tiny startup that created it.

The sum of their legal argument: you can't call it mayo if it doesn't have eggs in it.

But for Hampton Creek, the tech start-up that markets the egg-free "Just Mayo," that's precisely the point. Hampton Creek didn't just happen to create a spread that happens to taste like mayo. Its effort, borne of nearly 1,500 attempts at coming up with a passable imitation of the condiment -- canola oil and yellow pea protein figure into the winning formula -- was always intended to be a way for mayo-lovers to have their condiment and eat it too. It's mayonnaise made with the ultimate cage-free eggs, which also happen to be extremely more efficient to produce (the energy input to output ratio for eggs is about 39:1, according to Forbes, while Hampton's is an incredible 2:1).

The company's been a bit of a media darling, and its support from Bill Gates and "Asia's richest man" Li Ka-shing doesn't hurt, but Hampton Creek is still the underdog, for precisely the reason Unilever, a $60 billion corporation, is calling out: mayonnaise is supposed to have eggs. Big Mayo argues that Just Mayo is guilty of "consumer deception" -- the jar, it points out, features an image of an egg. And it technically has the FDA on its side: the agency's official definition of the "emulsified semisolid food" calls for vegetable oil, acidifying ingredients and "egg yolk-containing ingredients."

Hampton Creek counters that the FDA never defined the shorthand, "mayo." Michele Simon, a public health lawyer who blogs at industry watchdog site Eat Drink Politics, argues that in any case, that definition, which was set down in 1957, has just become outdated. "It’s not Hampton Creek’s fault if its innovation is out-pacing federal regulations," Simon wrote. "That’s par for the course in almost any technology-driven industry."

“Hellman’s has been around for 100 years and there hasn’t been really competition for 60 years,” Hampton Creek CEO Joshua Tetrick, told Forbes. ”[The lawsuit] speaks to how backwards these people think about food.” In an interview with Food Navigator, Tetrick added: "The bottom line is we do not solve big problems in the food industry unless we get out of these antiquated boxes we have stuck ourselves in."

Indeed, Hampton Creek is the classic Silicon Valley start-up with dreams of disrupting an industry -- and not just the mayonnaise industry. The company also has a line of dairy-free cookie dough, but they're looking even further. Think: scrambled eggs. As Mother Jones reported last year, "Their goal is to transform the food system the same way Apple changed how we use phones, or how Google changed the way we find information." And it shows just how far fake meat and dairy products have come -- no one ever sued Tofurkey over fears that it'd overthrow Thanksgiving.

What we're seeing now are the first rumblings of what's sure to be a much larger debate -- one that's only going to intensify as sustainability-minded techies develop test-tube meat, veggie burgers that bleed and other fakes aimed at convincing (tricking?) die-hard carnivores. A Change.org petition calling on Unilever to stop "bullying" sustainable food companies already has 10,000 backers as of this posting. But there should be no confusion about who's really being threatened here: Just Mayo, Unilever argues in its lawsuit, "already is stealing market share from Hellmann's." This could be an early sign that industrial-scale meat and dairy production is about to meet its match.