Chris Christie and Cory Booker tried to reform a troubled city's school system. Here's what they wrought instead 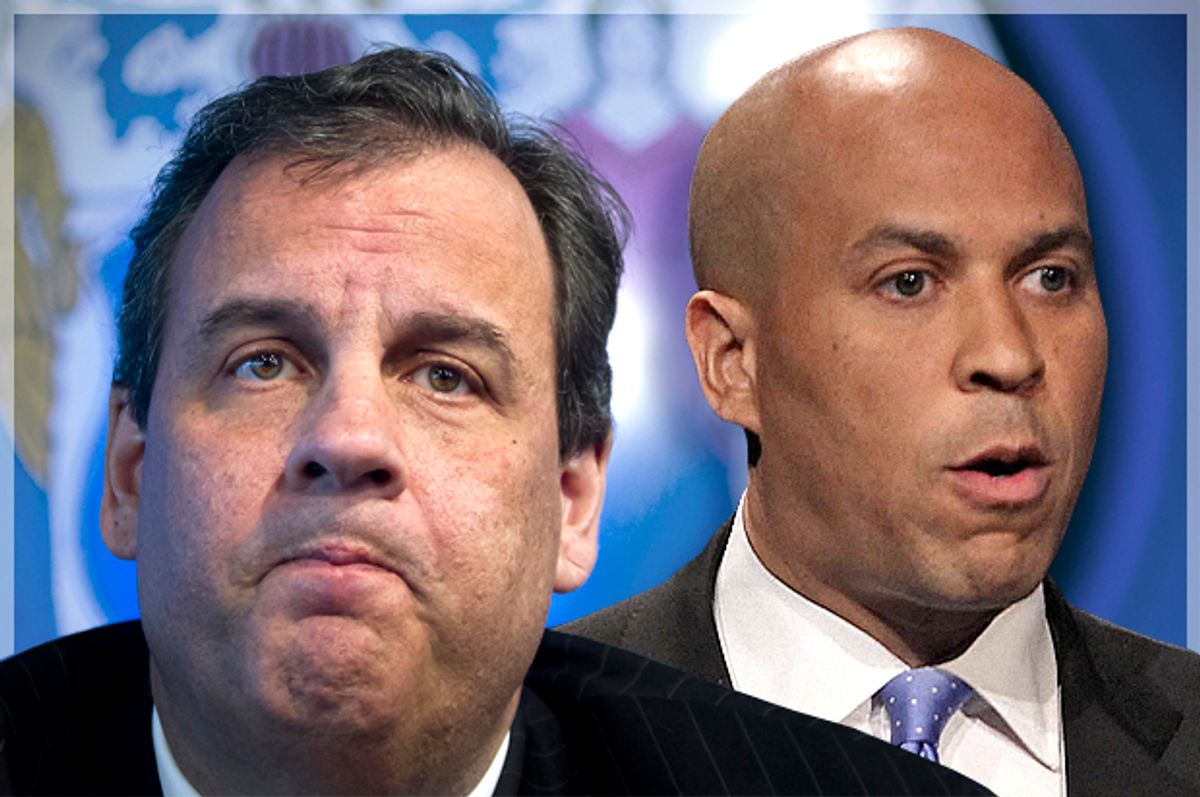 Newark police were ill equipped for a protest. In a city that witnessed 111 homicides in 2013 and five murders in five days during a particularly bad week this August, the officers did not know how to respond to seven high school students seated cross-legged on the street, locked together with PVC pipes. About sixty more students stood behind them. The police chose to close the road rather than engage the protesters. Even from their vantage point at the other end of the block, the blue banner was clearly visible: the shape of New Jersey, its northern section turned into a clenched fist, and white words declaring, “Now Entering STUDENT TERRITORY.”

Earlier that morning, the students had blocked the entrances to three high schools and then marched to the Department of Education, where they found police barricades guarding the side street with the building’s door. They proceeded to picket until the seven students took their places on the road. This was September 10, the second week of classes for the Newark Public School (NPS) system. But the students blocking the street that Wednesday morning were members of the Newark Students Union (NSU), a high school student union formed in 2012, and they had concerns beyond their attendance records.

The state took control of the Newark school district in 1995, citing poor student performance despite high spending per pupil, and maintains control today, although fiscal control was returned to the NPS Advisory Board this year. In 2011, Governor Chris Christie appointed a new superintendent, Cami Anderson, with the support of Cory Booker, the then-mayor of Newark who was elected to the Senate last year. Anderson was the senior superintendent of New York’s alternative schools for students who, for example, are in jail or above the typical high school age and was previously the executive director of Teach for America. Her office did not respond to requests for comment.

Christie, Booker, and Anderson tasked themselves with drastically rethinking the city’s school system. They were aided by Mark Zuckerberg’s $100 million donation to start a foundation for education in Newark—an announcement that was greeted with much fanfare on the “Oprah Winfrey Show” in September 2010 but has not turned into tangible change for students.

This fall, those plans for far-reaching change materialized with the implementation of Anderson’s One Newark plan, which calls for the closing, re-siting, or redesigning of some schools. Others have been turned into charter schools. The plan also eliminates neighborhood-based school assignments and institutes universal enrollment, which seeks to enroll the approximately 35,000 students in the system through a single process in which families rank their top choices and an undisclosed algorithm matches students to a school.

The results have been chaotic: students not yet assigned to schools, young children sent to schools on the other side of the city with unsafe transportation options, older ones forced to cross gang lines to get to class, and families with multiple children all attending different schools in different neighborhoods. Meanwhile, Christie refuses to speak with Newark residents, Booker has left the city for Washington, and Anderson maintains that One Newark is a success. The people who laid the groundwork for these reforms have deserted the city, increasing the gulf between themselves and those who have to face the consequences of their actions.

The backlash to One Newark centers around one demand: local control of the schools. Newark residents have no voice in their schools and no one from their community making the crucial decisions. Recognizing this problem, students and parents have organized protests, rallies, and walkouts, in addition to consistently speaking at NPS Advisory Board meetings. Some Board members support their efforts and on September 23, they voted to freeze Anderson’s salary until she attends one of their monthly meetings. The city’s new mayor, Ras Baraka, also sides with the students and is a vocal opponent of Anderson and One Newark. In an October 1 letter to President Obama and again in a New York Times op-ed on October 19, he outlines his argument against the restructuring. But his backing does little when the city does not control its schools.

“One Newark is being updated as they go along and it’s a very flawed way of leading a city. [Anderson] has to go. She’s on her own at this point,” says Jose Leonardo, the Newark Students Union’s vice-president, at a rally the day before he and six other NSU members blocked that road in front of the Department of Education.

According to NSU’s president, Kristin Towkaniuk, about fifteen to twenty students consistently attend their monthly meetings but rallies and walkouts can draw over 500. They are completely student-run, planning their own campaigns and direct actions, and sometimes work with New Jersey Communities United, a social-justice community organization that provides the students with resources.

The students’ demands include Anderson’s immediate resignation and an end to One Newark, but they recognize that those changes will not solve everything. “We do understand that if Cami leaves, that’s putting a band-aid on a bullet wound. Christie would just put someone that’s maybe worse than Cami. The biggest demand is full local control of our city,” explains Leonardo. “We’re state-run for twenty years and enough is enough. We have the potential to lead our own city and we have the resources. We have the people that are willing to do that and the city’s ready to reclaim control of the schools because right now, they’re taking advantage of that power to charter-ize the schools and take them away from the hands of the community.”

Another of NSU’s demands is that Christie hold a town hall meeting in Newark. “We want him to address the public. He says that he decides in Newark. Why doesn’t he address the public in Newark?” questions Tanaisa Brown, NSU’s secretary. Her query points to a larger grievance: those in power claiming to know what is best for a group of people whose opinions have never been asked and whose needs have never been met.

Parents are also thinking of broader trends in education reform, recognizing that Newark is not alone in facing closures of district-run schools while charter schools proliferate. Parents Unified for Local School Education (PULSE), a parent organization in Newark, is part of a federal civil rights complaint filed by the Journey for Justice Alliance, a national organization pushing for community alternatives to public school privatization. The complaint argues that One Newark, as well as restructuring plans in Chicago and New Orleans, discriminates against African American students, violating Title VI of the Civil Rights Act of 1964. According to the complaint, only 51 percent of Newark students are black but they constitute 86 percent of those affected by One Newark. An investigation is currently underway.

During the first week of school, PULSE organized a boycott and set-up alternative “freedom schools.” “When we filed the Title VI complaint, there was no movement on the One Newark plan. We felt that there needed to be the voices of the people saying that we do not accept this plan. We do not want this plan. This plan is not working for our community or our children,” explains Sharon Smith, PULSE’s co-founder. She says that over 600 parents signed a petition endorsing the action.

A second legal complaint was filed with the state’s Department of Education in August on behalf of twenty-four Newark parents, students, and teachers. It too argues that One Newark is a form of racial segregation and also claims that it violates the 1995 charter school law because it converts district schools into charter schools without the consent of parents and teachers.

But despite the overwhelming arguments against One Newark, the plan was implemented in September. Classes have started and charter schools have opened and the protests have begun once again. At an October 14 press conference, Anderson showed no sign of yielding to community demands, but the community, in turn, shows no sign of decelerating. If anything, organizing has increased.

When those seven students sat down in the middle of that street on September 10, they intended to stay until Anderson agreed to meet with them. In the end, they stayed for about eight hours. When the police finally moved in to break the chain, they sprained Kristin Towkaniuk’s wrist, but the experience of repression only heightened their desire to hold accountable those who have controlled their schools since before they were born.

“People from the outside, they come inside of Newark and they complain that our school systems are bad, that we have to change them and privatize them. I know that for twenty years we have not had local control. We’ve had state control. So you know what that means?” asks Tanaisa Brown, seated on the concrete road, her arms locked inside of PVC pipes. “That they’ve been failing us for twenty years.”