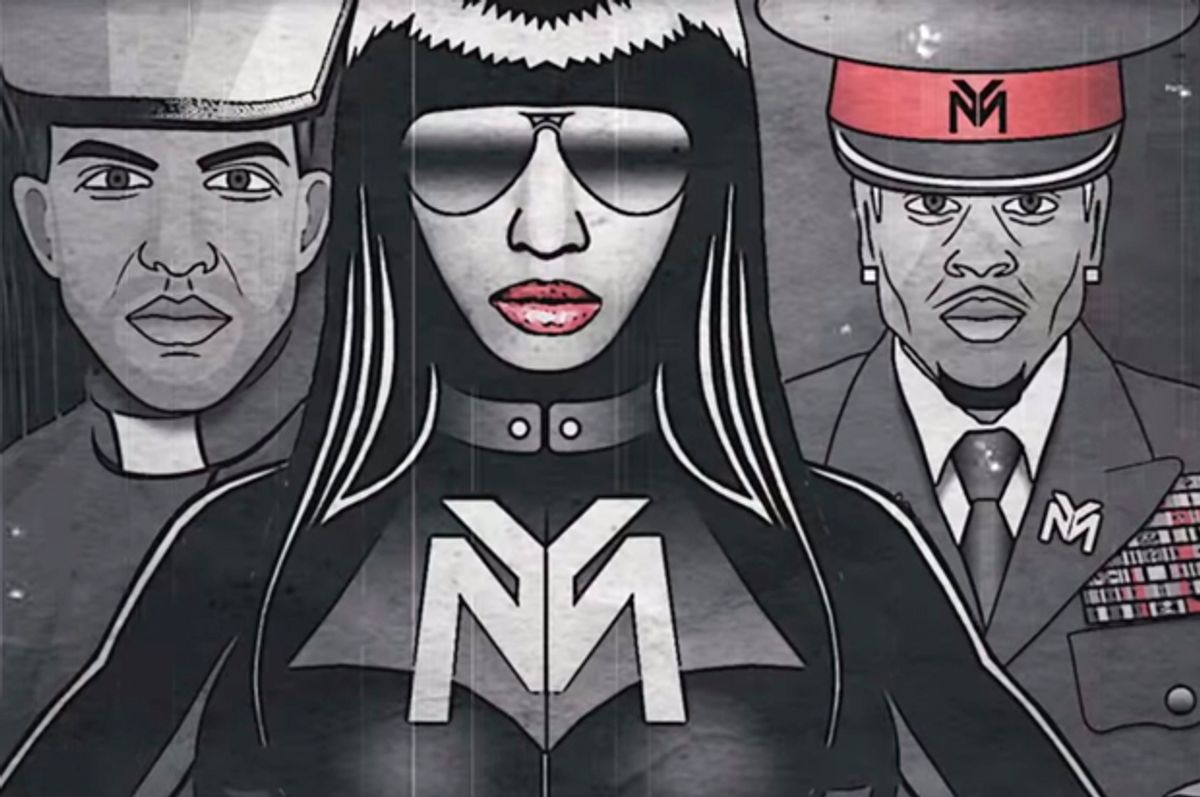 Nicki Minaj released an animated lyric video for her new single “Only” over the weekend, with crisp lines, an authoritarian posture and a strong, unified aesthetic that appears to be, unfortunately and undeniably, Nazi-esque. The use of Nazi-inspired imagery isn’t new in pop culture, but the Anti-Defamation League is calling the Minaj video “a new low” in pop cultural Third Reich appropriation.

There was German industrial rockers Rammstein, who included clips from Hitler’s favorite filmmaker Leni Riefenstahl in their video for a cover of Depeche Mode’s “Stripped” in 1997 and caught hell from the Anti-Defamation League, among others, for glorifying a Nazi propaganda artist. Representatives for the group insisted the choice was politically neutral, that the footage was selected purely for its aesthetic value:

There was the time (in 2011) that the Beastie Boys fought Nazis as action figures in the music video for "Don't Play No Game That I Can't Win":

And when Madonna’s 2012 European MDNA tour drew fire for featuring swastikas and images of Hitler in its video projections, the singer pushed back, saying she used them to draw attention to intolerance in general, which did little to assuage her critics:

In the case of Minaj's “Only,” director Jeffrey M. Osborne is taking a unique approach. Rather than responding directly, he spent the weekend retweeting viewer responses to the video directed at him.

In his video, the cartoon Minaj perches on a throne at the head of a massive rally, dictator-cool in aviator shades. The stage is lined with red banners boasting an angular M that looks like a twisted swastika, which appears again inside red armbands on the black-uniformed soldiers, a visual call-out to the SS if there ever was one. Because it’s a lyric video, typography is front and center. The lyrics to “Only,” which begin with “I never fucked (Li’l) Wayne, I never fucked Drake” are rendered in early-Nazi period Modernist block type, suggesting the rise of Minaj as a world-dominating power.

The tricky thing about symbols is how viscerally they demand a response in the viewer — it’s what they’re designed to do. We are invited to bring our own associations to the table, and in the case of swastika-inspired banners and the like, the association is more than likely going to be “Nazi propaganda,” a deliberately provocative storytelling method that comes off at best as selective memory and at worst, like trolling. Symbols, especially those as loaded with fear and loathing as Nazi propaganda, can’t really exist as pure design.