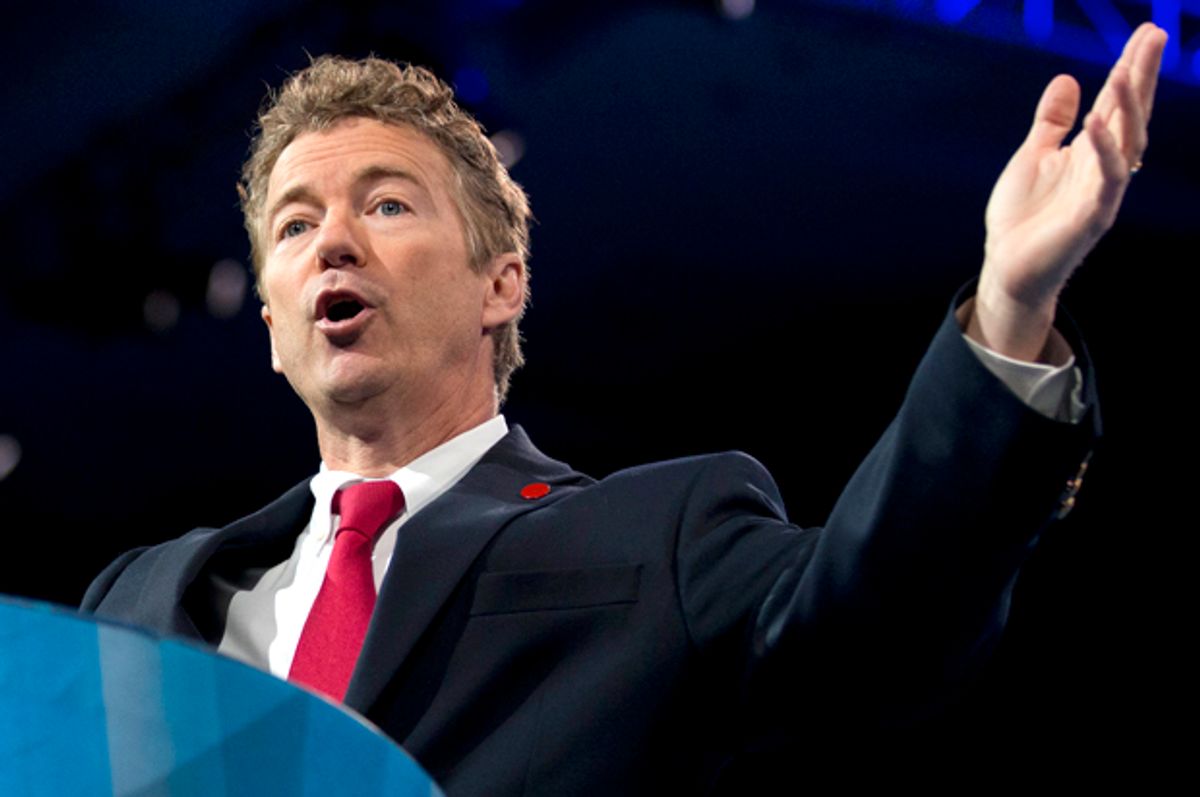 Kentucky Sen. Rand Paul has penned the foreword for a new book by Andrew Napolitano, a Fox News legal analyst who has peddled 9/11 conspiracy theories, denounced Abraham Lincoln as a tyrant in his prosecution of the Civil War, and defended Jack Hunter, the former Paul aide whose neo-Confederate writings came to light last year.

In the foreword to Napolitano's "Suicide Pact: The Radical Expansion of Presidential Powers and the Assault on Civil Liberties," Paul writes, "Now President Obama says he just wants to 'balance' liberty and national security. Judge Napolitano succinctly answers President Obama. To Napolitano, it isn't possible to balance rights and security because 'rights and [national security] are essentially and metaphysically so different that they cannot be balanced against each other."

"Judge Napolitano gets it," Paul later adds, "and I hope his new book will help the American public to get it; to wake up and mount a defense of our most precious liberties before it's too late."

Paul, who's likely to mount a presidential bid in 2016, is certain to face questions over why he agreed to write the foreword to a book written by a conspiracy-minded polemicist, even as Paul seeks to portray himself as a mainstream candidate.

The senator and Napolitano share a mutual acquaintance in the far-right radio host Alex Jones, on whose program Paul frequently appeared until he became a U.S. senator and he realized that fraternizing with the fringe conspiracy theorist was impolitic. Jones' program has been a forum for Napolitano to spout his own conspiracy theories about the 9/11 terrorist attacks, about which he asserts the government isn't being truthful. "It's hard for me to believe that [World Trade Center building 7] came down by itself," Naptolitano told Jones in 2010. "I think twenty years from now, people will look at 9-11 the way we look at the assassination of JFK today. It couldn't possibly have been done the way the government told us."

As Media Matters documents, Napolitano has also denounced Abraham Lincoln, decrying that the 16th president has been "mythologized" by historians and arguing that slavery would have died "a natural death" without Lincoln's "murderous war." In "Suicide Pact"  -- the book Paul foreworded -- Napolitano continues to castigate Lincoln, writing that he "suspended natural rights, disobeyed lawful orders of the Supreme Court, and arrested newspaper publishers and elected officials who disagreed with him, all while reflecting the profoundly, embarrassingly immoral white supremacist attitudes of his day." According to Media Matters, Paul writes in his foreword,  "Lincoln said any man can stand adversity, but if you want to test a man give him power. Even Lincoln sometimes failed that test, as Judge Napolitano recounts in Lincoln's suspension of habeas corpus; the test is nonetheless one that challenges liberty lovers everywhere."

Last year, Napolitano expressed support for Hunter, who voiced remarkably similar ideas about Lincoln in his role in columns and on a radio program as the "Southern Avenger." Hunter lauded Lincoln's assassin, John Wilkes Booth, waxed nostalgic for the Confederacy, and defended the right of Southern states to secede. But according to Napolitano, all Hunter had done was "spoken favorably of states' rights, and negatively of Lincoln." Hunter's critics, Napolitano wrote, "can't seem to recognize that states' rights--even secession--does not equal racism; it constitutes a brake on the feds' march to totalitarianism."

It would be far from surprising had Rand's father, Ron Paul, written the foreword to a book by a man who has conveyed these ideas. But as he gears up for 2016, Rand Paul is not-so-subtly attempting to distance himself from his father's association with far-right and neo-Confederate activists. In an October profile by the New Yorker's Ryan Lizza, Paul said he “was never associated with" right-wing extremists. "Ever. Only through being related to my dad, who had association with them.”

Moreover, Paul's association with Napolitano is curious given the senator's efforts to court African-American support. This summer, Paul spoke out on the unrest in Ferguson, Missouri, before even some prominent Democrats, including Hillary Clinton, weighed in. He has also championed criminal justice reform; questioned the GOP's focus on voter identification laws, which disproportionately disenfranchise black voters; and appeared before predominantly African-American audiences, including at the recent National Urban League conference in Cincinnati.

Nonetheless, Paul agreed to pen the foreword to "Suicide Pact" -- which underscores the difficulties he'll confront should he choose to proceed with a presidential run. On the one hand, Paul is pitching himself to Republican primary voters as a candidate who can put together the winning coalition required to restore the GOP to the White House. On the other, he launched his political career working for his father and advocating the Paul brand of right-wing libertarianism, and forewording a book like"Suicide Pact" is very much in keeping with Paul's political roots. But it's hard to see how Paul can successfully appeal to both a mainstream audience and the Paul family's historic base of support. It's no wonder he's hedging his bets and planning to run for reelection to the Senate in 2016.