SCOTUS could roil the GOP: How new threat to Obamacare may backfire on the right 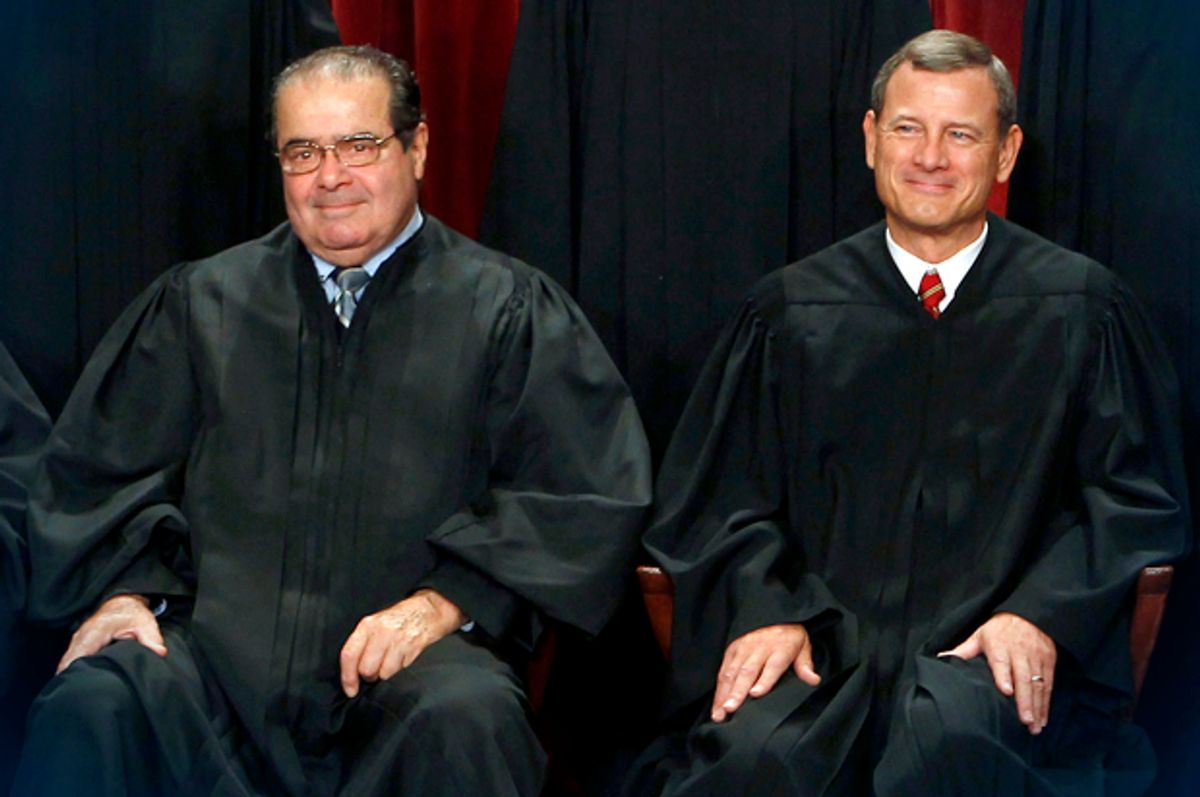 On Friday, the Supreme Court agreed to hear arguments in King v. Burwell, a case that threatens to eliminate the Affordable Care Act’s health insurance tax credits in most states and render health insurance unaffordable for millions of current beneficiaries. That the court agreed to take up the case is upsetting, but not entirely surprising. The legal reasoning of the plaintiff’s argument against the ACA is highly dubious at best, and the case’s supporters were gambling hugely on the willingness of the court’s conservative bloc to prioritize ideology and partisanship over sound legal reasoning and common sense. Given that there are at least four Obamacare opponents on the court, and it only takes four justices to grant a case a hearing, it would seem that their wager was well placed.

So now that the court’s conservatives are getting their second bite at the Obamacare apple, will the law actually be undone? Obviously it’s impossible to say for sure. It’s difficult to envision any scenario in which Antonin Scalia, Clarence Thomas and Samuel Alito vote to uphold the Affordable Care Act. Anthony Kennedy’s famous for being the court’s “swing vote,” though he voted to vacate the law the last time around. Chief Justice John Roberts, meanwhile, opted merely to wound the law instead of kill it outright. One could argue that since Roberts already passed up the less preposterous legal route to killing the law that he’s unlikely to go for it this time, but at this point it’s all conjecture.

Regardless, the odds of the law’s survival were higher heading into Friday than they were coming out. This is obviously not the scenario the White House wanted to be in, and they put out a statement on Friday denouncing the lawsuit as “just another partisan attempt to undermine the Affordable Care Act.”

But, for the moment, let’s assume that the SCOTUS conservatives carry the day and successfully eviscerate the Affordable Care Act by invalidating the tax credits offered through the 36 state exchanges run by the federal government. In many ways this would seem to offer an ideal political scenario for the Republicans. A legislative repeal of the Affordable Care Act isn’t going to happen, even with a Republican-controlled Congress, owing to the president’s veto pen. But if the Supreme Court steps in and guts the law for them, then they get their preferred policy outcome without having to do any of the actual dirty work. No fuss, no muss.

But it’s not at all that simple. The biggest political challenge facing the GOP is the fact that “repealing” or otherwise damaging the Affordable Care Act, while ideologically satisfying, carries with it some very real consequences. The states that opted not to create their own health exchanges – the states that would lose their health insurance subsidies if SCOTUS rules against the government – are mostly Republican-governed states. The sudden unavailability of those tax credits would mean that a lot of newly insured people in those states would no longer be able to afford their health coverage. They will expect their elected officials to do something to mitigate the damage, which would be catastrophic. Close to 5 million people across the country would see their health insurance costs spike.

That would pose an awkward situation for Republicans in the statehouses and Congress: Do they stick to their ideologically acceptable rigid opposition to Obamacare, or do they work to fix the law? Congress has the ability (if not the willingness) to pass a quick legislative fix to solve the problems. Governors could agree to set up exchanges within the state to keep the subsidies flowing. These are the simplest paths to resolving the issue, and there would be intense pressure to get either or both done.

Consider for a moment just how many governors and senators from Healthcare.gov states are considered to be contenders for the GOP presidential nomination: Chris Christie, Scott Walker, John Kasich, Bobby Jindal, Mike Pence, Rick Perry, Rob Portman, Marco Rubio and Ted Cruz. Hard-line Obamacare opponents like Cruz and Jindal probably wouldn’t be swayed (Cruz actually roots for the subsidies to be ripped away, calling them “insidious”), but others have at least shown some willingness to work within the law. Christie and Kasich both accepted the ACA’s expansion of Medicaid, and Pence pitched an alternative plan for expanding Medicaid, though it was shot down by the feds.

Republicans could end up seriously divided on the issue as they face down howling complaints from constituents, congressional Democrats and the White House to do the right thing and help restore health coverage to those who lost it.

The Republicans and conservatives who clamor for the elimination of the Affordable Care Act tend to carefully avoid discussing the inevitable results of the law’s demise: exploding health insurance costs, spikes in uninsurance, general chaos in the health insurance market, and the very real chance that people will die. The GOP doesn’t have a plan for what comes after the ACA, they just want it gone, no matter the consequences. If the Supreme Court rules against the government in King v. Burwell, they’d be forced to face down those consequences, and there’s a good chance they won’t like what they see.