A "grave tragedy" in a health camp 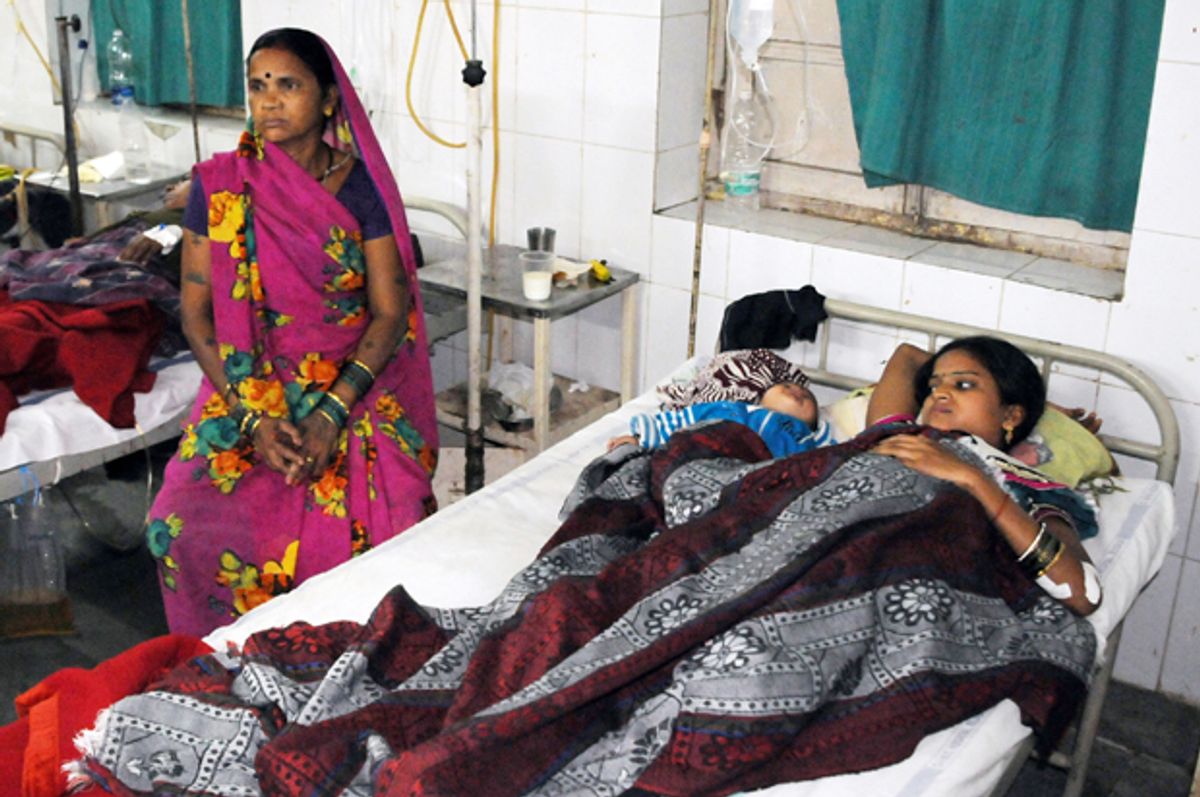 In a shocking event that sheds light on the desperate plight of far too many females around the world, at least eight women have died and more than 50 have been hospitalized -- including 10 in critical condition – following a botched mass sterilization this weekend  at a government-run health camp in the Indian state of Chhattisgarh.

The details, still coming in, are chilling. The BBC reports that "83 women -- all between the ages of 26 and 40 -- were operated on in just six hours by one doctor and his assistant." They were all reportedly poor, and mothers to two or more children already. RK Bhange, the chief medical officer of Bilaspur, says "There was no negligence," though the Guardian says that four doctors have been suspended and local authorities are promising to investigate. It also notes, harrowingly, that "Between 2009 and 2012, the government paid compensation for 568 deaths resulting from sterilization."

Witnesses claim the procedures, laparoscopic tubectomies, were performed "hurriedly." Soon after, several patients began complaining of pain. Sonmani Borah, the commissioner for Bilaspur district, told reporters Tuesday that "Reports of a drop in pulse, vomiting and other ailments started pouring in on Monday from the women who underwent surgery." The exact cause of death is yet to be determined, though the symptoms described are similar to toxic shock.

With its booming population, India has in recent years taken to incentivizing family planning -- with local health officials offering cash, household merchandise and even cars to both men and women who agree to be sterilized, though vasectomies are "not accepted socially." The procedures are regularly done en masse at government-run camps like the one in Chhattisgarh. Reuters reports the women were offered 1,400 rupees ($23) each to have the procedure – and that workers would receive 200 rupees ($3.25) for each woman brought in.

There's no doubt that it's just a matter of time before religious conservatives seize upon the tragedy as a rallying point against true women's healthcare, much as they did when they conflated the savage acts of Kermit Gosnell -- acts that resulted in the deaths of viable babies and at least one woman – as having anything to do with legitimate, sanitary, compassionate reproductive care. What happened in India is the result of a complex series of circumstances, including a system that severely limits women's contraceptive choices, coerces them into taking the extreme step of sterilization and doing it under potentially lethal circumstances, and imposes quotas and perks for doctors that lead to rushed procedures. Yet what happened over the weekend – and is continuing to unfold even now – is yet another harrowing example of how dangerous it is to simply be a woman in our world.

The World Health Organization estimates that every day, 800 women die of "preventable causes related to pregnancy and childbirth." And you can look at how our current system treats women right here in the U.S. and draw your own conclusion as to why our country has one of the highest maternal death rates in the industrialized world. These are your options, women. Risk death from pregnancy and childbirth, risk death from sterilization. Understand that you will be preyed upon and exploited, that your health and well-being, as well as that of any children you may wish to have, is rarely a priority.

Deputy executive director of the U.N. Population Fund Kate Gilmore said on Tuesday that "If the facts are confirmed, then a grave human tragedy has occurred. Where there is deviation from clinical standards, there must be consequences." And the consequences, over and over again, all over the world, are that women suffer and die.