Our soldiers are killing themselves: One simple gun control rule could help military suicide problem

The military has a suicide epidemic. This Veterans Day, let's take a real look at how to honor service and solve it 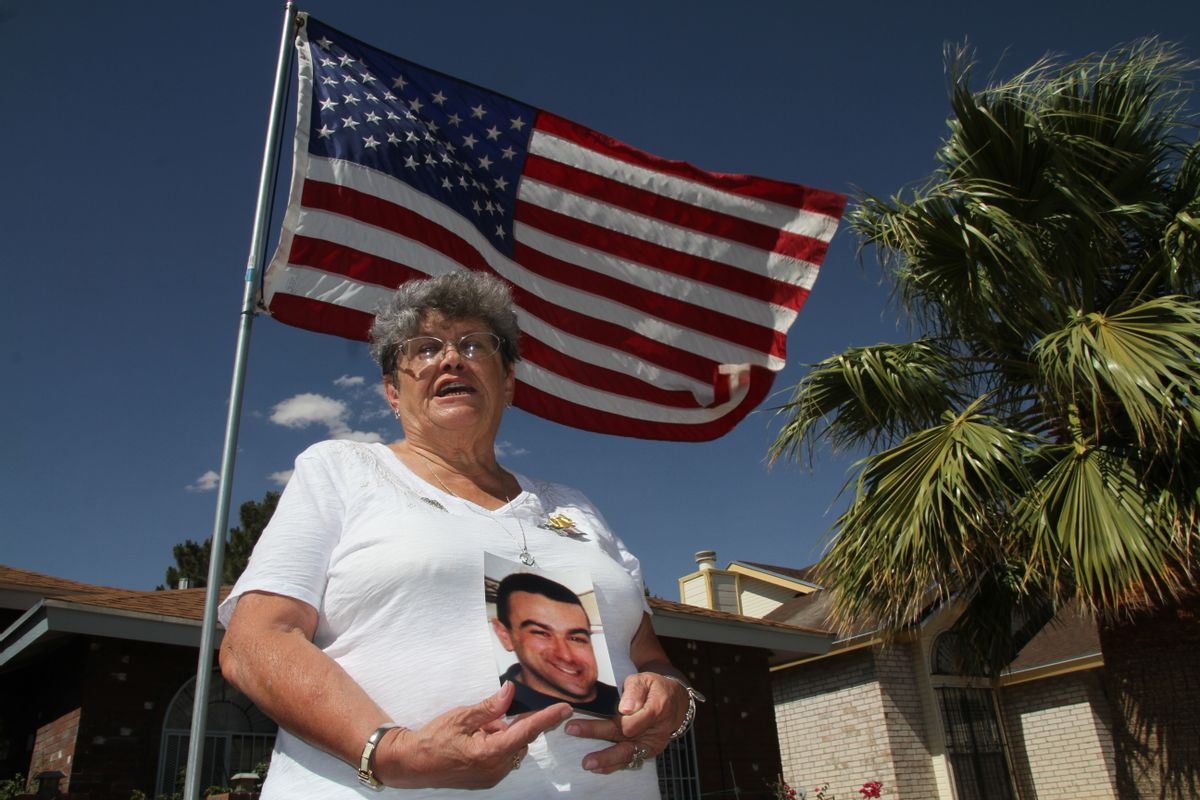 Lillian "Bonnie" D'Amico, poses for a photograph while holding a photo of her son Nicholas D'Amico in El Paso, Texas. Her son killed himself while waiting for a an appointment with a psychiatrist. (AP)
--

In 2006, Israeli generals began noticing a disturbing trend. Soldiers heading home for the weekend took their rifles with them, as had been done for decades. Increasing numbers, though, were using those guns to take their own lives, giving the Israel Defense Forces one of the highest military suicide rates in the world. The commanders responded by barring troops from taking their army-issued weapons home. The numbers of suicides promptly fell by 40 percent.

The U.S. military is facing an even worse epidemic. More than 2,000 troops have killed themselves since 2001, meaning that more soldiers have died at their own hands than have been killed in Afghanistan. The grim tally continues to climb: 164 troops killed themselves as of July, up from 154 last year, and the suicide rate among reservists and members of the National Guard is up 10 percent. Many top officials, including Army Chief of Staff Ray Odierno, fear those numbers will continue to increase well into the future.

Fully solving the suicide crisis is impossible, but there is a variety of steps the military could take to make things better.

First, the U.S., like Israel, could make it harder for American troops to take their military-provided weapons home with them and force them to install trigger locks, which prevent the guns from being fired, on the personal ones they own. Research has shown that many troubled soldiers make an impulsive decision to suddenly kill themselves after long periods of depression; using so-called means restriction to make it harder for them to do so could save significant numbers of lives.

Second, the military could step up its funding for research into next-generation scanners and diagnostic machines that could show whether troops with severe head wounds have also suffered a traumatic brain injury, putting them at high risk of developing PTSD or one day taking their own lives. More recent studies suggest that injecting troops with morphine immediately after they suffer a serious brain injury can significantly reduce their chances of developing PTSD, a potential indication that proper medication and treatment can prevent wounded troops from developing the disorder most closely linked to military suicide. That research would also benefit from an influx of Pentagon money.

Finally, it should change the policies that make it easy for soldiers to automatically renew their prescriptions for powerful drugs, enabling them to build stockpiles that they can use to kill themselves through intentional overdoses or to swap for other medications whose side effects include heightened suicidal thoughts.

The most important change, though, will be the hardest to pull off: persuading its top officers and noncommissioned personnel to commit themselves to the suicide prevention fight. It should begin by making the ways commanders and enlisted personnel handle mental health issues within their units a formal part of the written evaluations that help determine whether they’re promoted. Commanders who develop innovative ways of improving the mental health of their units should be recognized and rewarded, just like those who did the best job of training their soldiers for front-line combat in Iraq and Afghanistan. Senior leaders who fail to take care of soldiers suffering from PTSD or traumatic brain injuries or who allow other soldiers to ostracize, harass or bully them should be relieved of command and drummed out of the force.

It's impossible to prevent every troubled soldier from making the darkest of choices, but there are steps that could bring those numbers down. For a military struggling against a suicide epidemic that shows no signs of slowing, it's crucial that those changes be made, and that they may be made soon.