The problem with the "sensible, moral middle ground on abortion": You can't legislate it 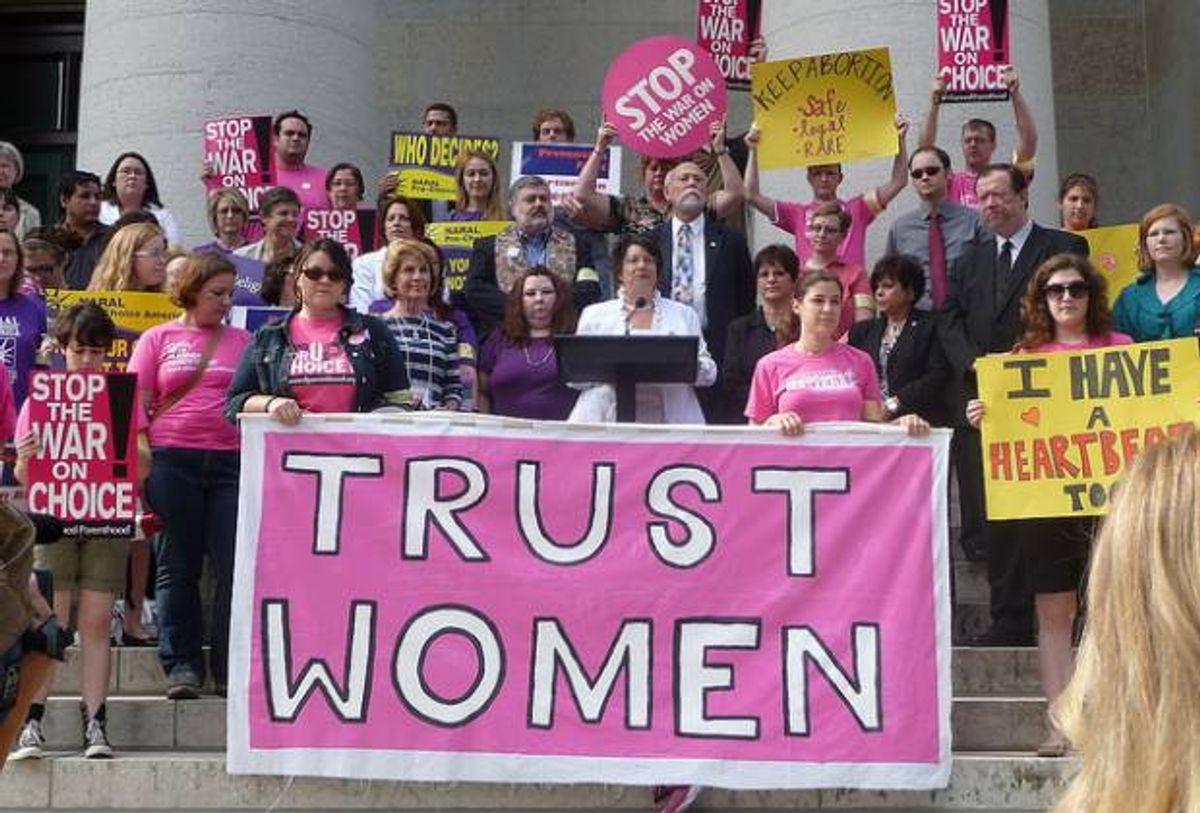 What is the "sensible, moral middle ground" when it comes to abortion, anyway? It probably depends on whom you ask. In a piece over at the Week, Damon Linker argues that the rhetorical thrust of the position was best captured by Bill Clinton when he said that abortion should be "safe, legal and rare." As a matter of policy, Linker suggests that such a middle ground "gestures toward easy availability of abortion in the early stages of pregnancy, severe restrictions close to viability, and a range of regulations in the middle, differing somewhat from state to state (because of the American federalist system)."

Linker is setting up this position, a European-style approach to access and restrictions, as a counterpoint to what he sees as "extremists on both sides of the American abortion debate." On one side of the extreme, Linker places personhood activists who, despite recent failures with ballot amendments, have been very successful at incorporating the rationale of personhood into existing laws and, as a result, criminalizing women who experience miscarriages or fall down flights of stairs.

On the other side of Linker's divide are women like Katha Pollitt ("a certain style of feminist"), who recently wrote a book called "Pro: Reclaiming Abortion Rights." In it, Pollitt argues, among other things, that abortion "benefits society as a whole" as "an essential option for women -- not just ones in dramatic, terrible, body-and-soul-destroying situations, but all women."

There are a few things here. Linker is perfectly entitled to disagree with Pollitt about abortion as a positive social good if it offends his own sensibilities, but to suggest that her argument is equal to the personhood movement is, to me, disingenuous. Whether or not you're inclined to agree, Pollitt's argument that abortion can improve women's lives is a reflection of women's lived experiences. Stating this explicitly rather than walking the "safe, legal, rare" line that Linker seems to prefer is about shifting the political landscape so that women are able to exercise their legal rights without punitive barriers. It's also about destigmatizing a medical procedure that 1 in 3 women will have in their lifetimes.

To compare a political position that meaningfully expands choice and defends women as moral actors to a movement that is organized to end legal abortion, ban contraception and criminalize women and doctors seems off, to say the very least. Personhood isn't just rhetoric or one perspective in a heated debate. It's policy. Linker acknowledges as much when he lists several cases in which women have been criminalized or otherwise stripped of their rights under the rationale of personhood, cases that represent a small sampling of the more than 700 that have been documented since 1973.

But the two positions are not equals. Personhood, in its fullest legal expression, requires that all pregnancies be carried to term, regardless of circumstance. There is simply no comparable position -- forced, universal abortion -- in the reproductive justice movement.

According to data from the Guttmacher Institute, more than 7 in 10 American women who have abortions report a religious affiliation. Six in 10 already have children. Three in 10 have two or more children. These are women who have considered their own moral qualms (if they have any) alongside their obligations to themselves and their families and elected to end their pregnancies. Some of those women will undoubtedly feel conflicted about the decision, but others will come to the choice quite easily. To ask that "safe, legal and rare" define these varied experiences is to deny the reality of abortion in the United States.

One in 10 abortions in this country occur in the second trimester. More than 9 in 10 occur in the first 12 weeks, and more than 6 in 10 occur in the first eight weeks. Laws that ban abortion (or make it nearly impossible to access) at a specific point in a pregnancy erase the nuanced reasons -- medical, personal and financial -- women need access to the procedure. It takes the matter out of the hands of women, their families and their physicians and gives it over to policymakers who want to paint with an exceedingly broad brush about when abortion should and should not be available. Absolute bans or policies that severely restrict access don't create more room to experience and discuss moral quandaries, they legislate a single moral standard.

As for the middle ground, I do believe it exists. It's always been a point of frustration to me that universal healthcare and prenatal care, a robust social safety net that allows women to care for themselves and their families, universal parental leave, family-friendly workplaces, affordable education and all manner of anti-poverty initiatives that support families are not central to the political platforms of the pro-life movement. I've questioned before why groups like the Susan B. Anthony List campaigned on the repeal of a law that helped 10 million people get healthcare or why expanded access to contraception isn't part of the Republican platform to reduce the number of abortions in the United States. Those policies seem sensible, but are generally political nonstarters.

Now, I am only three chapters into Pollitt's book, but I really took to this bit in the introduction, and think it's applicable to Linker's argument, so I'll share it here:

"Trust Women" is a popular motto in the pro-choice movement. It sounds a little sentimental, doesn't it? [...] But "Trust Women" doesn't mean that every woman is wise or good or has magical intuitive powers. It means that no one else can make a better decision, because no one else is living her life, and since she will have to live with that decision, not you, and not the state legislature or the Supreme Court, chances are she is doing her best in a tight spot.

What is that if it isn't the sensible, moral middle ground?