8 things you should never feed to cats and dogs

Veterinarians are finding that many of our most delicious foods, even healthy ones, can be deadly to animals 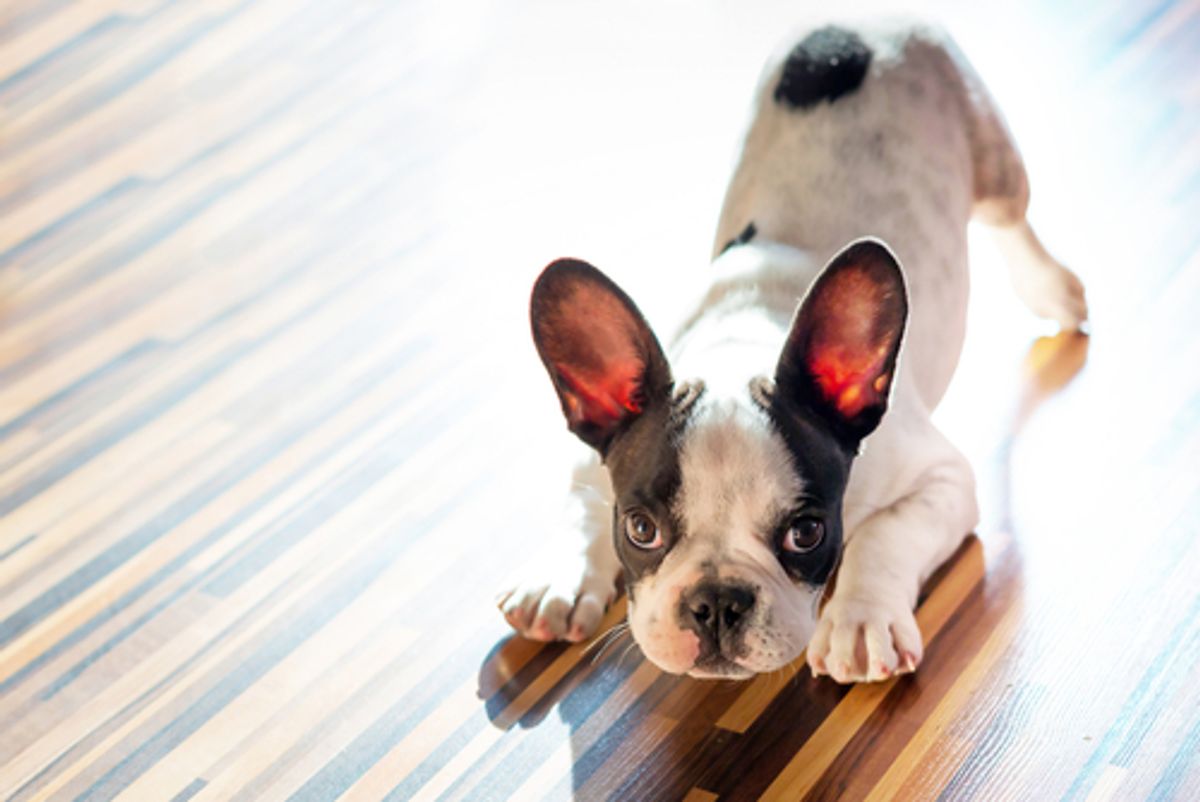 Who knew that a few sticks of sugar-free gum could kill your dog?

Evidently many people don’t, but the veterinarians who spoke to AlterNet tell us they’re seeing more animals coming in with hypoglycemia after eating as little as a stick. And even if the animal's blood sugar returns to normal, there’s quite a bit of concern that liver damage, and possibly death, may follow.

“It’s not just dogs, it’s cats as well,” says Maureen Saunders, owner/director of the Spring Valley Animal Hospital and Cat Care Clinic of the Nyacks. “And it’s important to get the word out there, so people know to watch for this.”

Many of us tend to think that dogs and cats can eat what humans eat. We often don’t think twice about giving them a bite of our cookie or worry too much when they scavenge for food. But dogs and cats don’t metabolize foods the same way we do, and many of the foods we eat without problems can hurt, and even kill them. Here are eight of the most harmful foods to keep away from your pets.

1. Xylitol. One of the more ubiquitous sweeteners in sugar-free products, xylitol is a naturally occurring sugar alcohol found in the fibers of many fruits, vegetables and mushrooms. It’s typically extracted from hardwoods and corn cobs for commercial use and found in sugarless gum, toothpaste and many low-calorie baked goods.

While xylitol has no known toxicity in humans, just a few sticks of sugar-free gum scavenged by a 20-pound dog can cause its insulin levels to spike and send it into hypoglycemia. Ingesting higher amounts of xylitol can create serious liver problems including acute hepatic necrosis, leading to death. Cats are also susceptible to xylitol poisoning.

Sometimes vomiting occurs soon after ingestion, followed by hypoglycemia within the next hour. At this point, the animal may act lethargic and lose coordination as a result of lowered sugar levels. Elevated liver enzymes and liver failure can be seen within a few short days.

If caught within the first few hours and taken to a veterinary clinic, many pets can be nursed back to health by inducing vomiting and perhaps the administration of dextrose.

2. Chocolate. Cocoa, the main ingredient in chocolate, is said to have many health benefits for humans, from lowering the risk of cardiovascular disease to reversing age-related memory loss. However, one chocolate bar can be deadly to a dog or a cat.

Chocolate, along with coffee and some soda drinks, contains compounds known as methylxanthines. When pets ingest foods with these compounds, they may display signs of hyperactivity, discomfort or excessive thirst. Often, these symptoms give way to abnormal heart rhythms, seizures and even death. Baking chocolate and dark chocolates, which contain more of these compounds, are far more dangerous than milk chocolate or white chocolate.

3. Avocados. Guacamole is a staple dip in many households, and we might think it's harmless to let our pet lick the bowl when we’re done. But the avocado fruit contains persin, a fungicidal toxin. While it is harmless to humans (with the exception of those with avocado allergies), when consumed by dogs and cats it can cause vomiting and diarrhea.

Birds, and rodents such as hamsters and guinea pigs are especially sensitive to avocado poisoning and can develop congestion, difficulty breathing, and fluid accumulation around the heart. Larger amounts of ingested avocado can create similar symptoms in cats and dogs and even cause death.

4. Macadamia nuts. Dog owners should be especially mindful not to feed cookies, especially store-bought ones you might not know the ingredients of, to their pets. Beyond typical macadamia nut cookies, other flavors of commercial cookies and even some brownies and cakes contain macadamia powder or oil as an ingredient.

Veterinarians are still not quite sure why, but macadamia nuts are known to cause vomiting, ataxia, tremors and hypothermia in dogs, though they don’t seem to have the same effect on cats and other domestic animals. Dr. Saunders says the results can be life-threatening and that elderly dogs may be more at risk.

Dogs typically develop these signs between 12 and 48 hours after ingestion. Vets recommend that asymptomatic dogs should be treated with activated charcoal, while those who become ill should immediately be taken to a vet clinic where treatment may include fluids, analgesics and antipyretics.

5. Grapes and raisins. The veterinary community has recently put out the word that grapes are highly toxic to dogs and cats.

“We didn’t know about this until a few years ago, but eating grapes and raisins can lead to acute kidney failure in pets,” says Dr. Saunders. “Unfortunately, we’re still not sure why some animals can tolerate them and others cannot.”

The ASPCA believes that pets who already have the one of a variety of health conditions may have more dramatic reactions to grape ingestion.

6. Yeast dough. The yeast in uncooked bread dough can rise in a pet’s digestive system and cause high amounts of gas to accumulate. This can cause an animal’s stomach or intestines to rupture, possibly leading to a painful death.

While the ASCPA says that the risk is much lower for pets when the dough has been cooked and fully risen, it can also cause problems. The organization recommends that bread-based treats should be no more than 10% of a pet’s caloric intake.

7. Onions and garlic. “For cats, this is a major issue,” says Dr. Saunders, who says she’s seen several serious cases of onion poisoning. “People might think it’s okay if they’re cooking stew to give some to their pets, but that’s actually a real problem for them.”

It’s not just cats—a dog’s health can also be put at risk by onion ingestion. In both animals, the compunds thiosulfate and allyl propyl disulfide found in onions work to oxidize an oxygen-transporting protein called hemoglobin in the blood, making it less capable of carrying oxygen throughout the body.

All members of the allium family, which includes garlic, shallots and scallions, contain these compounds, which can wreak havoc on a pet’s red blood cells, if eaten in large enough amounts. Garlic tends to be much more toxic than the common onion. Also, garlic and onion powders, typical ingredients in many soups, baby food and meat sauces, can be quiet killers.

The veterinarians we spoke to say that symptoms typically don’t show up immediately, but eventually the animal becomes lethargic and there can be some physical changes, such as pale gums and dark-colored urine. In the most severe cases of onion poisoning, a blood transfusion might be needed to save the animal's life.

8. Marijuana edibles. Legal for either recreational or medical use in several states, marijuana is often sold in more potent forms, including edibles that taste much like some foods we would typically eat.

Tina Wismer, of the Animal Poison Control Center told NBC News that animals don’t react to the tetrahydrocannabinol in cannabis the same way humans do. “Without treatment, they can go into comas and die,” she says, noting that edibles may be even more lethal if they also contain chocolate or raisins.

A 2012 study published in the Journal of Veterinary Emergency and Critical Care found that marijuana ingestion of baked goods that contain medical-grade THC butter can kill a dog. The researchers looked into 125 cases of dogs ingesting marijuana between 2005 and 2010 and found that it resulted in two deaths. Both dogs asphyxiated on their own vomit.

Since marijuana was legalized in Colorado, veterinarians in the state say they’ve seen some dogs die from ingestion. Ashley Harmon, a veterinarian at Fort Collins Veterinary Emergency and Rehabilitation, told a local newspaper that one dog died after eating a pound of pot brownies while another ate a pound of pot butter.

Pet owners who use marijuana edibles in their homes must exercise caution and keep these items securely packaged and out of reach of dogs and cats.

Dr. Saunders says that while pet poisoning from foods is a serious problem, there are many other common home items our pets shouldn’t come in contact with.

“One of the biggest problems I see is people trying to help their pet with medicines to treat them. They often do that by giving them Tylenol, but they end up giving them inappropriate doses,” says Saunders. “This is especially a problem I see with older dogs. Pepto Bismol is given to dogs, but the aspirin in it is a major issue with cats.”

Dr. Saunders says that people should pay particular attention to where they store antifreeze, which contains ethylene glycol. Its sweet smell and taste are attractive to pets as well as wildlife. Antifreeze is deadly when consumed.

Even certain flowers can cause a problem in the home. “Some types of lilies are a real issue with cats,” she says.

If your pet suddenly becomes ill and you know or suspect it has eaten any foods in this article, Dr. Saunders suggests you immediately contact the ASPCA Animal Poison Control Center at 888-426-4435. Also, find out where the emergency veterinary clinic is in your area and keep its address and phone number clearly posted on your fridge in case of emergencies.