"There is but one way out for you": Read the uncensored letter J. Edgar Hoover wrote to MLK 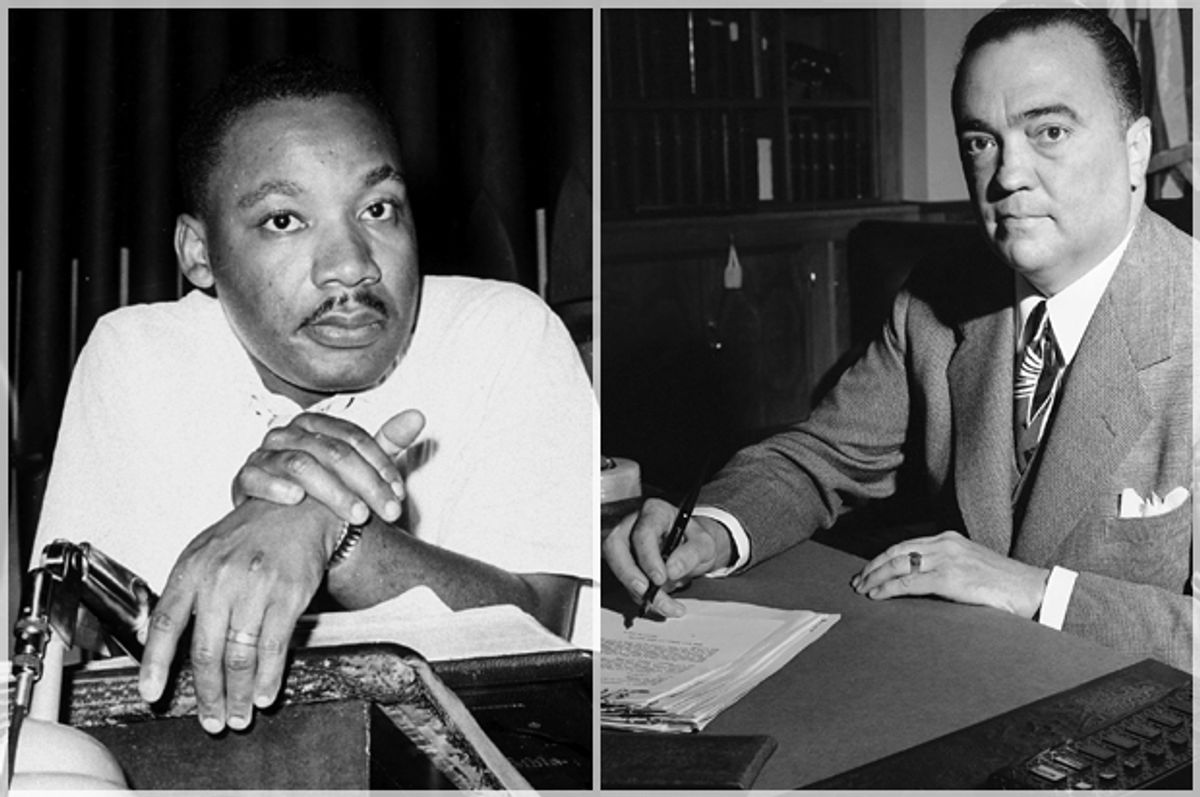 The mutual contempt between civil rights icon Dr. Martin Luther King, Jr. and longtime Federal Bureau of Investigation chief J. Edgar Hoover was hardly a well-kept secret. It was 50 years ago this month that Hoover denounced King as "the most notorious liar in the country" after King publicly took the bureau to task for its woefully inadequate enforcement of civil rights protections. In the years since, historians have documented the FBI's smear campaign against King, which primarily consisted of wiretapping the activist and digging up dirt on his sexual rendezvous. Perhaps the most chilling piece of evidence uncovered in investigating the FBI's crusade against King was a threatening 1964 letter -- confirmed by U.S. Senator Frank Church's investigative committee as Hoover's handiwork -- in which Hoover, posing as a disillusioned black supporter, warned that King's "countless acts of adultery and immoral conduct" would be exposed. For the first time, that letter is available in uncensored form.

Previous versions of the letter redacted details about King's sexual liaisons, but while conducting research for a biography of Hoover this summer, Yale University historian Beverly Gage happened upon an uncensored version "tucked away in a reprocessed set of his official and confidential files at the National Archives," she writes in the forthcoming New York Times Magazine.

Containing no fewer than six uses of the word "evil," the letter assails King as a fraud and appears to have been sent along with a wiretapped recording of the civil rights activist engaged in an extramarital encounter.

“Lend your sexually psychotic ear to the enclosure,” Hoover writes in one passage.

"You know you are a complete fraud and a great liability to all of us Negroes," the letter reads. "You are a colossal fraud and an evil, vicious one at that," Hoover later adds.

Hoover vows that King will soon be "exposed on the record for all time."

"Yes, from your various evil playmates on the east coast to [here an individual's name is redacted because Hoover's allegations about her have not been confirmed or debunked] and others on the west coast and outside the country you are on the record. King you are done," Hoover declares.

The letter concludes with a menacing declaration that "there is only one thing left for you to do," giving King a deadline of 34 days before he would be exposed.

"You are done," Hoover writes. "There is but one way out for you. You better take it before your filthy, abnormal, fraudulent self is bared to the nation."

As Gage notes, King told associates that he was convinced that someone -- likely Hoover -- was trying to provoke him to commit suicide.

"One oddity of Hoover’s campaign against King is that it mostly flopped, and the F.B.I. never succeeded in seriously damaging King’s public image," Gage writes. "Half a century later, we look upon King as a model of moral courage and human dignity. Hoover, by contrast, has become almost universally reviled. In this context, perhaps the most surprising aspect of their story is not what the F.B.I. attempted, but what it failed to do."

Read the letter below, via Gawker: