Wall Street's radical new rival? Why this investment firm says it's catering to the 99 percent 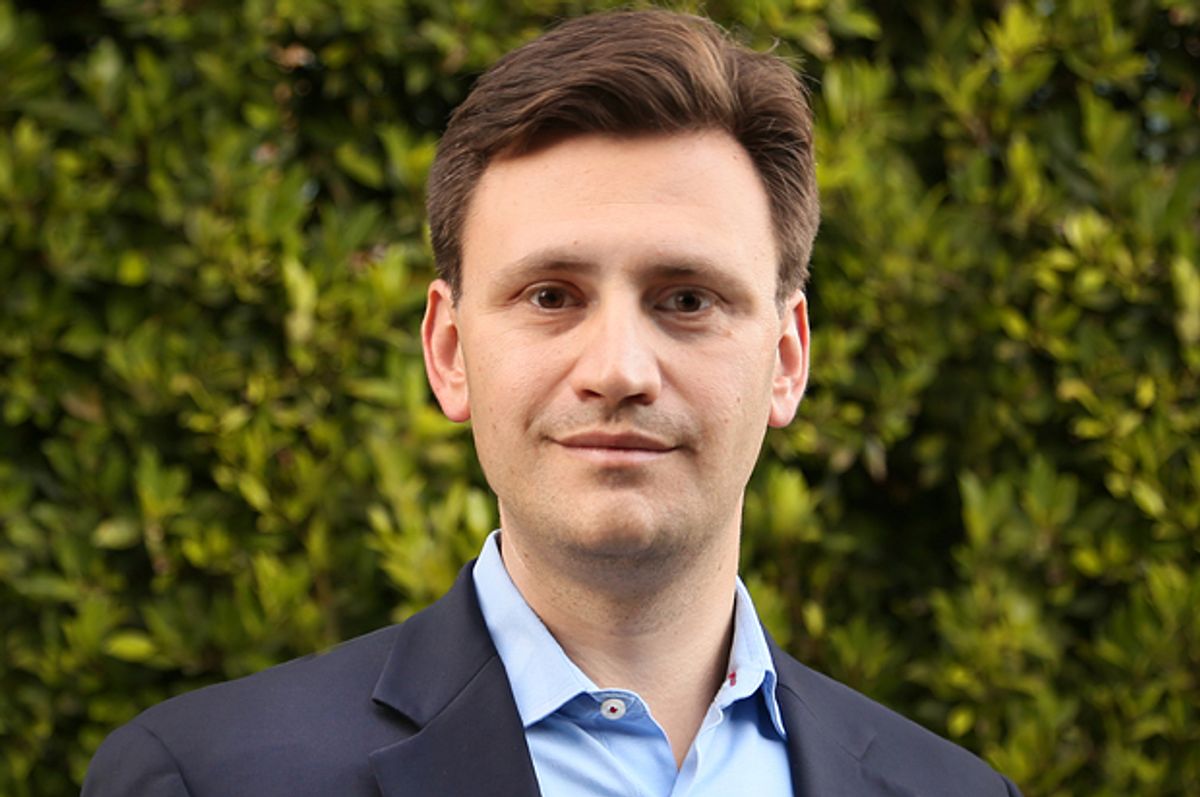 As liberals and Democrats continue to pick up the pieces from their midterm thrashing, one increasingly common refrain is how the usual metrics emphasized by politicians and pundits when it comes to the economy's health seem to no longer fit. Unemployment is down, the deficit is falling and healthcare costs are on a downward trajectory; yet none of this was enough to persuade most voters that the U.S. economy is getting better, not worse.

Of the many once-reliable signs of whether the economy was "working," the one that the political class will likely have the most trouble parting with, besides unemployment, is the stock market. The story of the market during the Obama years has largely been one of remarkable success, but because the market has become, more than ever, the playground of the wealthy, the good times have not trickled down from the Gordon Gekkos of the world to the 99 percent. And in an economy that's dominated by finance, and in which regular wages are stagnant or falling, that's a big problem.

But with the launch on Tuesday of his new investment firm Aspiration, Andrei Cherny — the former White House speechwriter, Center for American Progress senior fellow, business consultant and Arizona Democratic Party chairman — is hoping to change that dynamic for good. Billed as "an investment firm created for the middle class," Aspiration's goal is to prove that financial investments don't have to be the sole property of the 1 percent, and that investment firms can operate more ethically and responsibly without sacrificing profit. Salon recently spoke with Cherny over the phone about Aspiration, and a lightly edited version of our conversation can be found below.

So where did the idea for Aspiration come from?

In some ways, it’s a culmination of a lot of different things I’ve done over the course of my career and a way to address something that’s been an issue I’ve cared about a great deal and worked on through a lot of different ways, which is the question of wealth equality, and inequality of opportunity in America. I worked in the Clinton White House in the '90s; I’ve done a variety of things in public policy; I started Democracy Journal where, among other things, we published the first piece by a then-little-known law professor named Elizabeth Warren about the idea that became the Consumer Financial Protection Bureau and really worked with her to design and first launch the public campaign early on for that; I’ve been a financial prosecutor. So I’ve seen these issues from that angle as well.

I have a business background, and a couple of years ago I was talking with a friend named Joe Sanberg, who I had known for almost 20 years and who'd gone off to Wall Street after college and been very successful. We both came from Southern California families, struggling backgrounds — mine was an immigrant family, his was a single mother — and really felt there was a real mismatch of investment opportunities in America, and a financial sector that wasn’t paying attention to middle-class Americans and was too often acting in ways that did not reflect [middle-class] values. We saw an opportunity to build a company that would be valuable, in all senses of the word, around fixing that problem.

That disconnect you mentioned, between the middle class and the financial industry — where does it come from? What does it look like in practice?

I think you see that disconnect in a lot of different ways. I’ll give you a few examples: What you currently have among Wall Street investment banks and hedge funds and private equity is a financial industry that, among those kinds of players, has a client base that is almost exclusively that of multimillionaires. The result has been this tale of two cities when it comes to investing, where you have a group of very smart people on Wall Street who spend all their time thinking about and creating investment products for a very tiny but very wealthy group of individuals and almost nobody is focused on thinking about the financial needs [of] middle-class investors.

That’s a problem, and the results are clear. When you look at some of the issues of the wealth gap in the country, that wasn’t always the case. Twenty-five years ago or so, there was a Dean Witter in every Sears in the country. That infrastructure of middle-class investment opportunities has by and large disappeared, for ... the same reason that we don’t have Sears all over the country (technological change, large-scale business forces, etc). So what we wanted to do is create a 21st-century investment firm for the middle class and think about what that would look like in this day and age.

The second piece of what Wall Street does that we’re trying to do very differently is fees. We really take the approach that if we’re asking for people’s trust when it comes to their family’s investments, we need to trust them as well, so we have this pay-what-is-fair fee structure where we uniquely trust people to decide how much to pay us. We hope they make that decision based on what we’re doing for them as a [company] but also the values that we live by. We want to be judged by that and held to those standards.

The third piece of what Wall Street does that we want to do differently is, you don’t have to go very far to read the headlines over the past decade-plus about some of this "greed is good" mentality that still permeates too many places in Wall Street. There are some people there who, too often, are putting their own personal profit above the needs of their customers and above what makes sense for the country as a whole.

We think an investment firm can and should run on different kinds of values, so what we’re doing is basically bringing the Tom’s or Warby Parker model to the finance world. We take 10 cents out of every dollar that comes to our company in revenue and apply it toward charitable giving around micro-loans for people in the U.S. who are struggling and looking to build a better life for themselves. We also then make it possible for our customers to have both a "do-well" portion of what they do on Aspiration.com but also a "do-good" portion, where they can give to the charitable cause of their choice.

One question I have that I'm guessing you're running into elsewhere is, isn't Wall Street supposed to care about profit above all else? If there was money to be made by looking at the 99 percent, wouldn't Wall Street already have done it?

I think in some ways [Wall Street's not doing this] is out of just pure capitalism. They have a very profitable business model currently, where they do very well providing investment products and advice to a very small number of people, and that is an easier business to build than trying to reach millions of people. The wealth gap is such in our country that they have been able to do very well without having a business need to provide this kind of approach to everyday investors. That leaves a big gap for a company like ours, and a big need for a lot of people who are looking for investments that make sense for them and their families, but also for an investment firm where they can feel good about a company they do business with in the financial space.

And how much of an issue is the fact that middle-class people don't "feel good about" companies where they make their investments? Or even further, how many people in the 99 percent find investing at all to be intimidating, scary and somehow not for them?

That’s not a question I’ve gotten before but that’s exactly the right question ... I think it points to the exact problem, which is that the reason that everyday investors are not investing in Wall Street is partly because of a lack of access, but it’s really also because of a lack of trust.

There’s a lot of people who could be making investments, who, perhaps, should be making more investments instead of keeping their money in ways that are not going to appreciate over the long term. There are a lot of people sitting on the sidelines of the financial market because they have, like all of us, seen a financial industry that seems to operate by its own rules and with very different values ... That’s a big part of what we’re trying to do in terms of building trust, showing that we function, as a company, on very different values and approaches than Wall Street. And also in terms of the kinds of education we provide.

[Lack of education's] another reason a lot of people see the financial industry [as] off-putting and intimidating. Though there’s been a lot of financial education since 2008, almost all of it has been in the form of charts and graphs and white papers and things like that, which for some people are attractive and for others are math homework. We try to take a very humanized, storytelling approach to really ground some of these concepts in much more relatable ways of learning, that are based on what the best social science out there teaches us...makes sense for people.

How important to you is it that, assuming Aspiration is a success, Wall Street sees what you're doing and follows your lead? Do you care? Or do you feel like, if they don't, that's a shame, but it also means less competition?

We want everybody else in this industry to start doing the kinds of things we’re doing in terms of charitable giving and trusting their customer and focusing on the investment needs of the middle class. If even Wall Street wakes up and starts doing this, that means that we’ll have been a real success, and that’ll be the true measure of whether or not we’ve been able to meet a need of people who don’t want an investment firm where they need to park their values at the front door. I have my doubts on whether, after all these years, Wall Street will start doing things in a different way. But if they do, that’ll be the best compliment that we could possibly get.