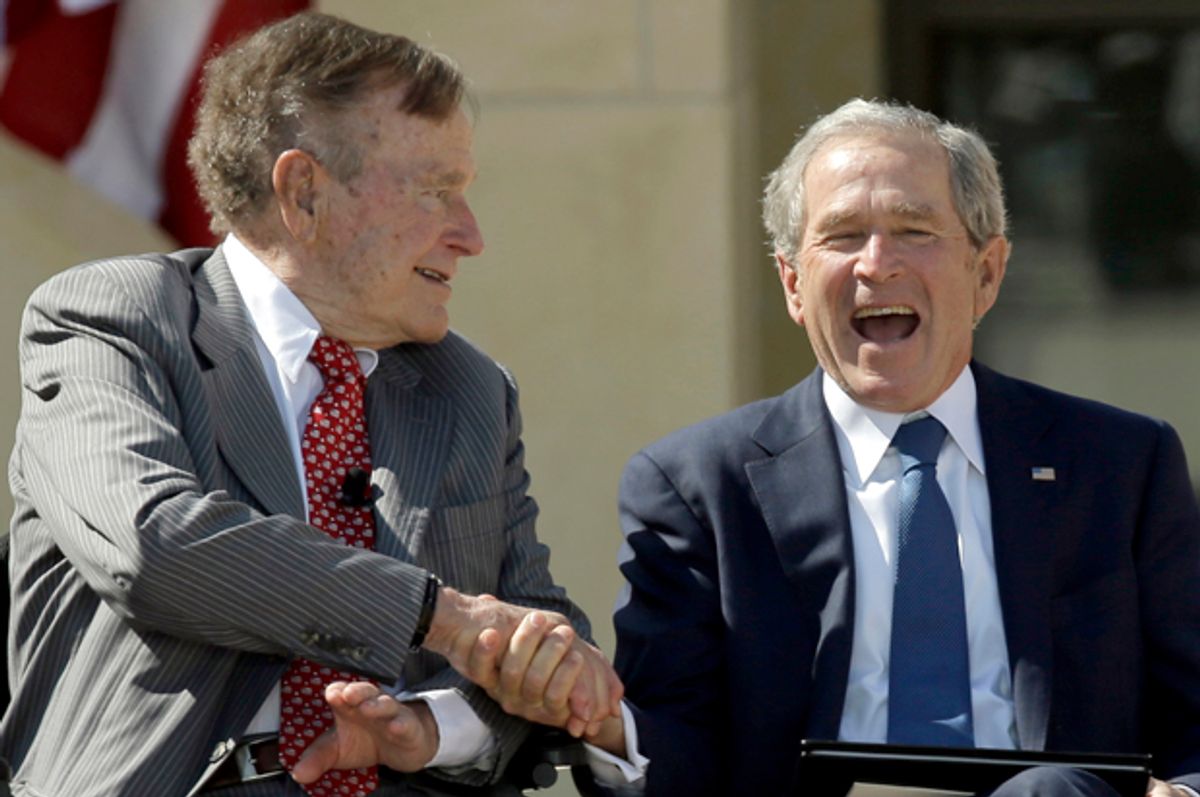 For all the stylistic differences between George H.W. Bush, the genteel New England patrician, and his swaggering, drawling, thoroughly Texan son George W., the two men share a common aversion to introspection. Constantly admonished by his indomitable mother, Dorothy, never to brag, the elder Bush was so allergic to navel-gazing that he never wrote a presidential memoir, opting instead to publish a collection of his letters. George W. Bush, meanwhile, once declared, "I don't spend a lot of time trying to figure me out ... I'm just not into psychobabble." But while the 43rd president’s new book, "41: A Portrait of My Father," is decidedly not about figuring himself out, it does offer an often-poignant glimpse at the ailing former president and a relationship that’s been the subject of reams and volumes of speculation.

Readers who come to the book expecting a candid assessment of the two men’s substantive differences are in for disappointment. Policy issues don’t figure prominently in the book – largely because it appears that father and son seldom discussed them. During George W.’s administration, George H. W. “understood better than anyone that the President is surrounded by experts with in-depth information about key issues,” George W. writes. “If I had asked for his advice on a policy matter,” he imagines, “he would have said, ‘Send your briefers so that I know what I’m talking about.’” Let there be no doubt that George W. was the decider.

The proverbial 800-pound gorilla in the room is, of course, the Iraq War, which Bush 43 launched over the objections of many realist veterans of the Bush 41 administration. George W. doesn’t sidestep the issue, but in explaining the differences between his father’s decision not to topple Saddam Hussein in 1991 and his decision in 2003 to depose the dictator, Bush grows noticeably defensive. He continues to insist that Saddam posed a threat to the U.S. and brazenly asserts that he exhausted all diplomatic avenues before embarking on a military course. Bush is emphatic that the war was not an effort to “finish what my father had begun,” stating that he and his father set out entirely different objectives in Iraq. “Congress and the Coalition had signed on to liberate Kuwait,” Bush writes of the 1991 war. “That was the mission. It was achieved.” Bush doesn’t dwell on why his father stuck to that limited mission, despite neoconservative calls to roll into Baghdad and rid Iraq of Hussein. But we know that Bush 41’s defense secretary, a man named Dick Cheney, had warned that overthrowing Hussein would create a “quagmire.”

While not devoid of spin, Bush doesn’t ignore the most glaring of his father’s political shortcomings. George W. acknowledges that in his father’s unsuccessful run for the U.S. Senate from Texas in 1964, George H. W. opposed the Civil Rights Act, though the elder Bush drew conservative ire four years later when he backed a fair housing bill. And though George W. would self-consciously associate himself with the Reaganite wing of the GOP – maneuvering that many interpreted as a not-so-subtle snub to his more moderate father – he lavishes praise on his father and grandfather, GOP Sen. Prescott Bush of Connecticut, for often bucking the right wing. George W. lauds Prescott Bush for publicly opposing red-baiting demagogue Joseph McCarthy even as many of his conservative Catholic constituents supported McCarthy, writing that his grandfather demonstrated a commendable “willingness to stand up to extremism.” Bush also applauds his father for deftly handling the “active fringe element” embodied by the John Birch Society during his tenure as a Republican county chairman in Texas. Pat Buchanan comes in for harsh criticism over his inflammatory “culture war” speech at the 1992 GOP convention, with Bush lamenting that while it may have fired up the party’s right-wingers, the speech “did not convey a kinder and gentler Republican Party.” Newt Gingrich, who led the congressional GOP’s revolt against George H. W. Bush’s tax increase and caused a brief shutdown, comes off no better. “As we have learned over the years, the American people expect their government to function, and a shutdown led by the Republicans always strengthens the Democrats’ hand,” Bush writes, in what’s hard not to interpret as a dig at the Tea Party-era GOP. The tax-cutting, anti-climate science, anti-choice, and anti-marriage equality Bush is no moderate -- and despite Bush 41’s occasional unorthodoxy on issues like taxes and the environment, he, too, adapted to the rightward drift of the GOP – but Bush’s evident dismay with the GOP’s hard-right faction serves as a reminder of how truly unhinged the party has become since President Obama succeeded him.

Those are the political takeaways from the book. But it’s primarily a book about George H. W. Bush the husband, father and grandfather. And the personal portions of the book can be remarkably affecting. Even for readers already acquainted with the story of 3-year-old daughter Robin Bush’s untimely death from leukemia in 1953, reading of her decline and last moments is positively heart-wrenching, and the effect Robin’s death had on George and Barbara Bush cannot be overestimated. The tragedy -- the worst a parent could endure -- instilled in George H.W. a sense of compassion that even his fiercest political rivals have seen. As vice president, Bush clashed bitterly with Democratic V.P. nominee Geraldine Ferraro in 1984, but George W. writes that the two later became friends. Shortly before Ferraro’s 2011 death from cancer, George H.W. sent her an email in which he wrote, “I often think of our strange but wonderful relationship, and I hope you know that I consider you a real friend. In fact, I hope it’s okay if I say I love you.”

Such anecdotes represent the book at its strongest. The prose, meanwhile, can be quite imaginative – literally. There’s a lot, you see, that George W. can only imagine. Of Prescott Bush, who criticized Nelson Rockefeller for leaving his wife for a younger woman, Bush writes, “I can only imagine what he would say if he saw what our society looks like today.” And Bush “could only imagine” what Prescott would have thought had he lived to see the day when Gerald Ford made Rockefeller vice president. After describing his parents’ brief consideration of an agricultural life, Bush muses, “I could just imagine Mother milking a cow.” Contrasting Barbara’s decision to rough it out in Texas with her mother’s regal air, Bush says, “I can only imagine her horror at the idea of her daughter living out in West Texas, where the only thing refined was oil.” And if Barbara had chosen to stay in New England instead? “I can only guess how Dad’s life would have turned out if his wife had been less open to change.”

With speculation about yet another Bush presidency intensifying, it’s possible that George W. will not be the only president George Herbert Walker Bush has sired – and the prospect of a Jeb 2016 campaign may well generate even more interest in "41." Will Jeb take the plunge? At this point, we can only guess.