"Mommy, is this a laser gun?": When your kids discover your sex toys 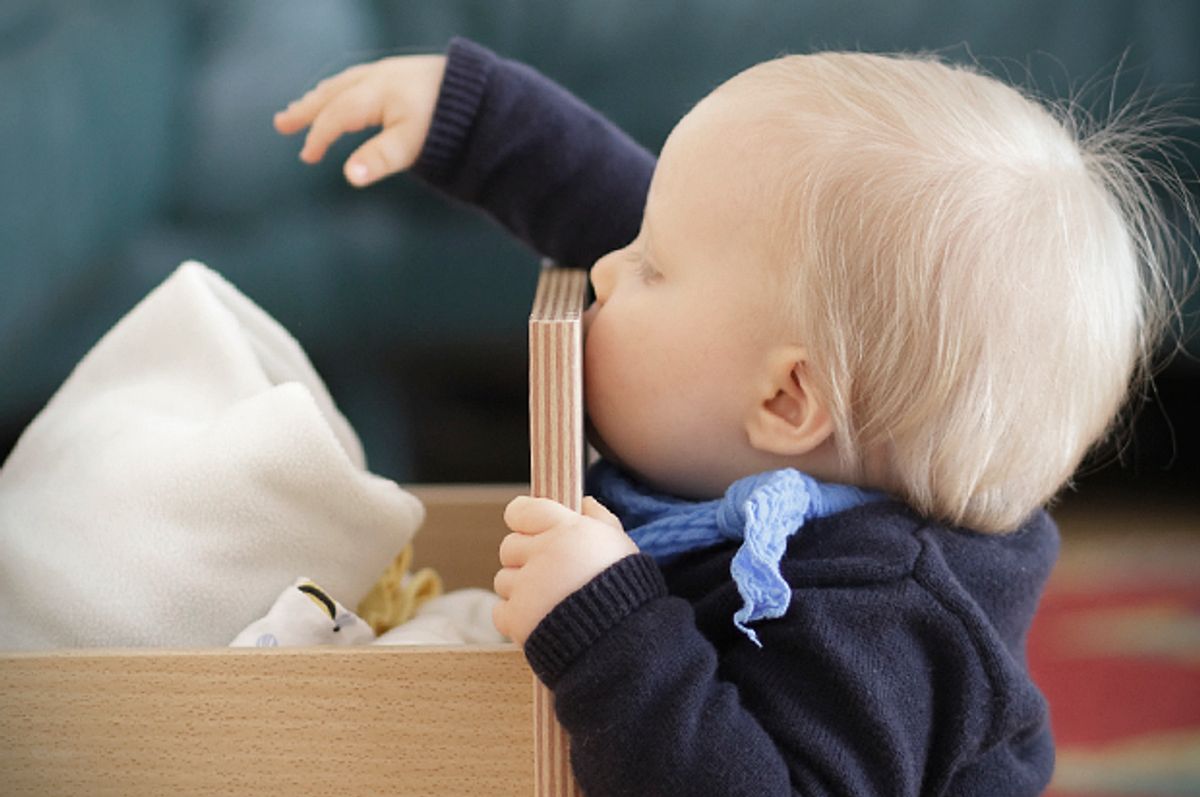 This week, Jenna Andersen, a photographer and oft controversial mommy blogger, posted a photo of her kids to Instagram. That alone would offend some parents' sensibilities, but this image generated pushback for an entirely different reason. It showed her 4-year-old son and 21-month-old daughter sitting in their parents' bed, playing with mommy's Hitachi Magic Wand. Her daughter has the end of the toy pressed up against her eye, while her son looks on giddily. The original caption, which was edited after controversy erupted, read, "They call this the 'robot massager game,' and love to trade it back and forth. #sterilized." Later she clarified that they “trade it back and forth to find the funniest effect” (i.e., vibrating your eyeball).

Of course, Andersen does have her defenders. On Instagram, one of the few comments that now remain reads: "Even if she did use it as a sex toy and the kids were playing with it so what? As long as she is not involving her children in her sex acts and posting a pic of it, I see this pic as super harmless and pretty funny/cute." The same commenter added, "Some of us are very liberal with our children and how we talk to them about sex. This is our right as parents." Said another supporter, "So you posted a pic of your kids playing with Mommy's Little Helper. So what? Sex is natural ... ."

But then it ended up on gossip blog Get Off My Internet, where for 10 comment pages, strangers debated her daughter's potential for contracting eye herpes, joked about Child Protective Services and made charming remarks about “how big and stretched out [her] vag is after that elephant massager.” Clearly these people are mature enough to be making parenting decisions for other people! Wrote one commenter, “Letting your kids play with the vibrator...gross, not sanitary, not normal, not cool, not something all parents do, not fodder for Instagram....I can't stand this woman.”

Andersen was happy to talk to me about the Hitachi hoopla and explain how her kids ended up playing with it. "I bought the Hitachi because everyone assured me I would love using it in an 'off-label' sort of way. I gave it a go, but found that there are other vibrators I like a lot more," she wrote in an email. "Now I have a $60 electronic getting dusty in a cupboard. My kids discovered it recently and immediately deemed it 'The Robot.'" And then she had this supremely smart thing to say: "Posting [the photo] felt like a funny way to comment on what it's like to move between being a woman and being a mother, and how strange it feels to have those two selves encounter each other in the presence of my children."

Let’s set aside for a moment the totally valid debate over whether it’s a good idea to post photos -- and embarrassing ones at that -- of your kid to the Internet in such a widely accessible way. What so many of the angriest commenters reacted to in this image is the fact that she let her kids play with her vibrator in the first place -- so pretend for a second that this image wasn’t posted to Instagram. Say instead that Andersen's kids found her “back massager” and wanted to play the “robot massager game,” and she let them. Is that such a crime?

I recently watched a friend’s 2-year-old treat a large wicker basket -- the thing that had previously held all of her stuffed animals, before she dumped them out in favor of their container -- as the most exciting thing in the world. For, like, a half-hour straight. “It’s a pot!” she squealed as she pretended to make pancakes in the wicker basket. “Don’t touch the pot!” Sure, there is a difference between a Hitachi and a wicker basket -- as far as I know, her parents haven’t used the latter for sex. But, when it comes to children’s play, does it matter what an object is actually intended for, as long as it’s sanitary and not a choking hazard? And as long as the play itself is appropriately childlike? I'm not suggesting you hand your 5-year-old a Playboy; I'm saying there is nothing inherently graphic or inappropriate about a Hitachi.

I took to social media looking for parents’ tales of kids discovering their sex toys and got responses like this: “I told her what it was and a basic outline of how it's used. She is 6.” Said another, “They raised brows, surmising what it was, but didn't freak out. We asked if we needed to discuss, then put it way.” Then there’s this reply, which echoes Andersen’s experience: “He thought my rabbit was a laser gun.” The Internet is full of similar stories. Take this essay written by a woman whose 8-year-old daughter found her vibrator, deemed it a "massage stick" and asked to use it. She let her, and why not? It was clean and, as she explains, "I didn’t want to make a big deal about it, and scream, 'OH MY GOD. PUT THAT THING DOWN NOW! THAT’S MOMMY’S TOY AND YOU CAN’T TOUCH IT!' as if she were holding a loaded gun." The truth is, this stuff happens all the time. It's inevitable: kids are curious, people who have reproduced are by definition sexual beings and there are only so many places to hide a sex toy in a house.

As for Andersen's photograph, Lang says, "Because Jenna’s 'device' could go either way, I think this photo is fine -- it’s funny, but it’s funny because we adults know all the uses for her fancy massager. And I’m willing to bet there are tons of adults who don’t know the additional uses of this type of massager." That said, she takes issue with her sharing the image: "Posting a picture online of children that could be interpreted as sexualized in any way is probably not a good idea. Or that would humiliate them at some point in their lives, in my mind isn’t very respectful of their privacy." Somehow I doubt we'll ever see a day where the Internet masses are more scandalized over Instagram as a violation of a child's privacy than of the very idea of a kid playing with a sex toy.