"The Sword of Bezos is no longer hanging over our head": Author Douglas Preston on the Amazon/Hachette deal 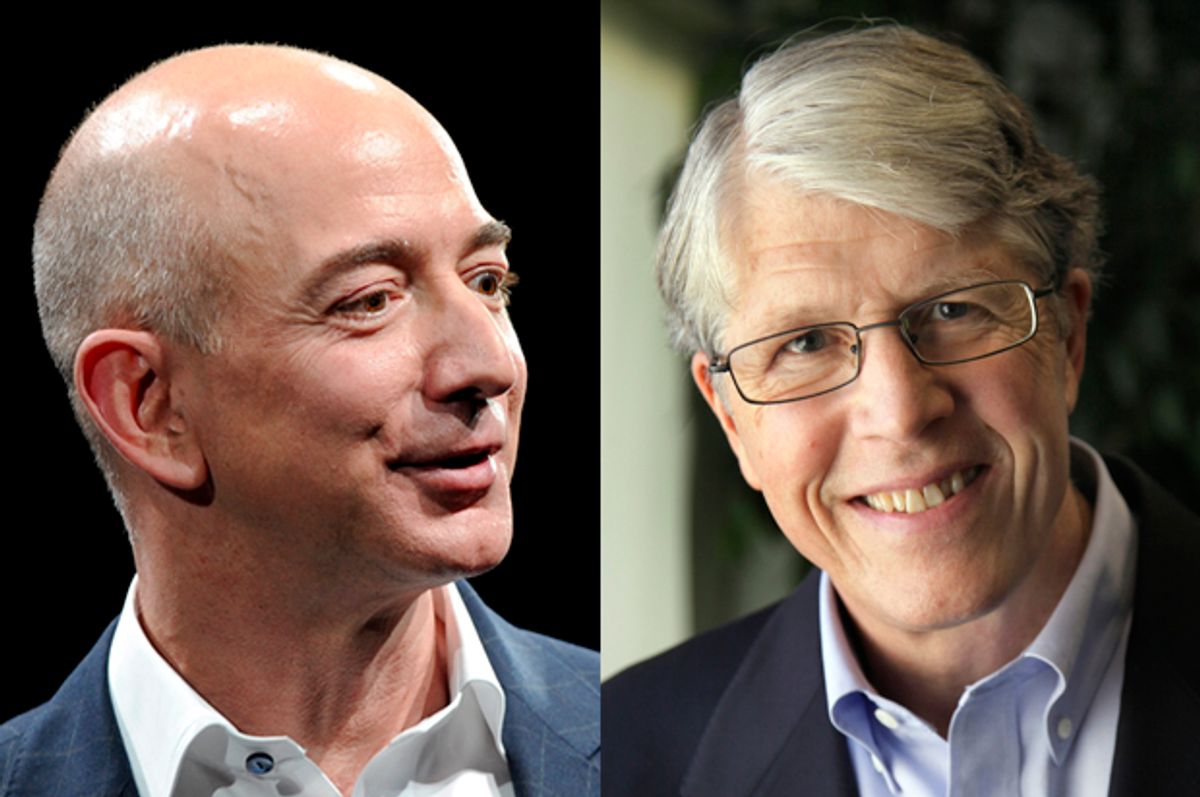 Amazon announced yesterday that it has reached a settlement with Hachette Book Group, ending a contentious period of negotiation the two entities have waged in public since last year. The details of the new multi-year contract haven’t been made public, but both sides said in statements that they are pleased with the result. Hachette won the right to set its own prices for e-books.

Thriller author Douglas Preston formed the loose coalition Authors United, writing an open letter to the online retailer that ran as a full-page ad in the New York Times. The letter was signed by more than 900 writers, including heavyweights like John Grisham and Barbara Kingsolver.

Preston found out about the settlement yesterday, while he was on a flight from Arizona to New York. Emails started pouring in about it, including one from Hachette CEO Michael Piestch assuring his authors that the publishing house had struck a good deal on their behalf.

“I knew he would never accept a deal that wasn’t good for his authors,” said Preston by phone today.

Preston says Amazon’s tactics damaged its reputation in the literary community, though, and “it’s going to take a long time for them to earn back authors’ trust.”

Whether and how Amazon will attempt to do that remains to be seen.

“Apparently, they don’t think they need it. They treat books like widgets or wide-screen televisions or computer cables or whatever. They just treat books in the same way they treat all the other things they sell,” said Preston. “We authors are kind of over a barrel.  If we don’t want to play with Amazon we look at losing half of our book sales, or worse. They probably don’t have to worry too much about what authors think.”

In the meantime, Preston is just relieved the Hachette deal went through.

“It means that the Sword of Bezos is no longer hanging over our head,” he said. “Our books are now being sold freely at Amazon. There are no more sanctions against books.”

When Preston first drafted that open letter, he was optimistic that it could change the course of the negotiations immediately. That didn’t happen.

“I thought Amazon would say, oh, gee, the authors are really hurting here, we will go into these negotiations with Hachette in good faith and try to arrive at a reasonable arrangement so that we can all benefit,” he said. “But Amazon was asking for absolutely outrageous and untenable terms for Hachette and demanded these terms for months and months and months, terms that would have bankrupted my publisher. So it didn’t go the way we hoped.”

Amazon held firm in its negotiations, even firing back at Preston, calling him “an opportunist.” Preston still laughs at the charge.

“It’s kind of funny. The opportunity for what? To be disparaged by one of the largest companies in the world? I’m not sure what opportunity I’m seizing here,” he said. “I haven’t seen any difference in sales of my books. I’m just not interested in celebrity-hood at all. I’m a typical writer. I’m happiest when I’m sitting in my office writing my novels and living my quiet life. I’m not cut out for this controversy and activism.”

Still, he’s not backing out of the fight. While Preston says he doesn’t think Amazon will “drag authors into its disputes” again, he still wants the Justice Department to investigate whether Amazon is exercising its market power in unfair ways.

“One company controls 50 percent of the book market in the United States, and this company has already shown itself to be ruthless and willing to treat authors like dirt,” he said. “That’s still a problem.”