What's so funny about "The Big Bang Theory"?

It's the most popular comedy on television – but I have to admit: I just don't understand what everyone's laughing at 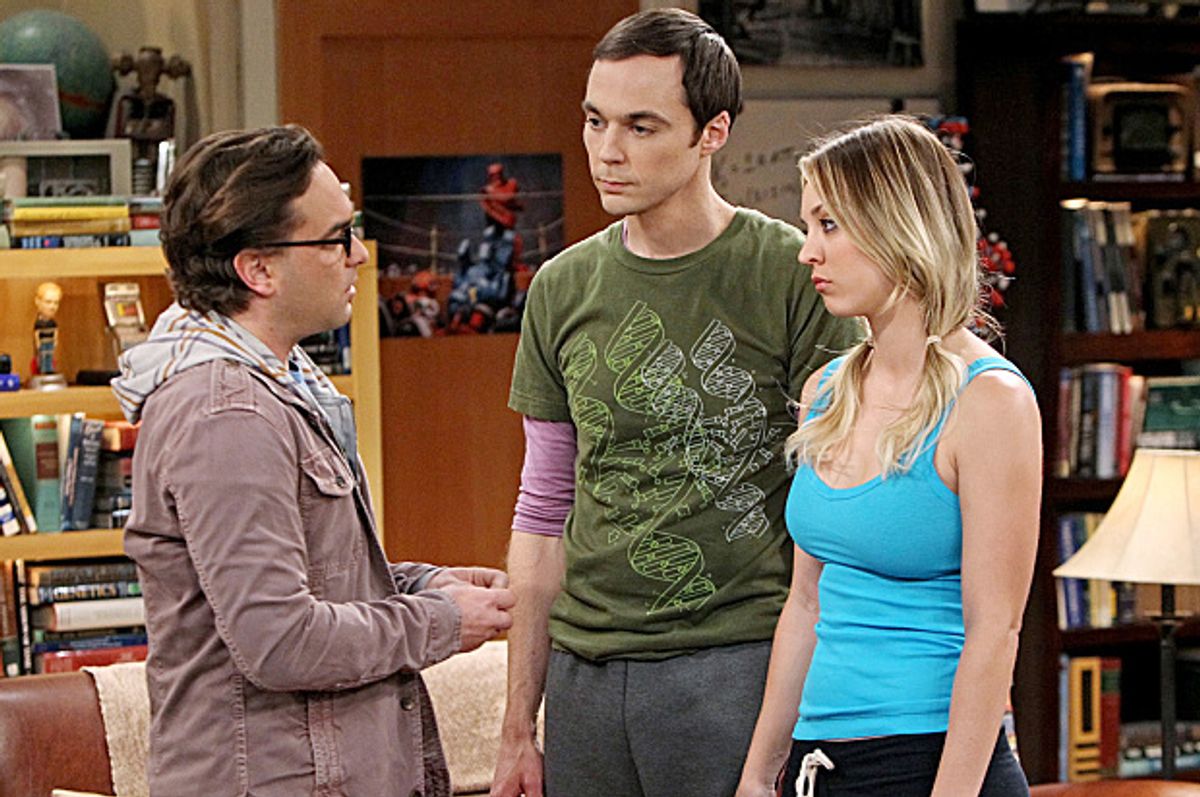 "The Big Bang Theory" is the most popular TV show in America, consistently ranking in the top two or three TV comedies since its fourth season, and leading the ratings for syndicated content in the last two years, except last year when it was narrowly beaten out by "Judge Judy." I had never seen it, and so I thought the eighth season might be a good opportunity to find out what all the fuss was about.

I like TV. If it distracts me from my brain-noise without the added stimulus of an additional screen nearby, I’m in. "Keeping Up with the Kardashians" passes this test, as does "Chopped," as do seasons of "30 Rock" that I’ve already seen up to four times.  I have seen more episodes than I’d really care to admit of the Netflix horror-telenovela "Hemlock Grove," which is about a town in Pennsylvania where some people are werewolves and other people are vampires and no one has ever noticed this or done anything about it, even though there are a ton of mysterious vampire/werewolf-related things happening all the time.

I’ve seen every episode of "Don’t Trust the B (In Apt. 23)" and I cried when it was cancelled. When I see a headline along the lines of  “Has this Episode of American Horror Story Finally Gone Too Far?” I already know that my answer will be ha-ha, no. I watch all the critically acclaimed usual suspects, too, usually gulping them down as soon as they start streaming. But that leaves a lot of time for trashier fare, even in this golden age of Quality Television. I’m not just making sure you know that I’m not a snob. I’m trying to say that it’s kind of a miracle that I’ve never dipped into the wealth of "Big Bang Theory" episodes available to me before now.

Too bad it’s the millionth thing this week to make me do complicated mental gymnastics in order to avoid having the banal, snobby thought, “Are most Americans just plain dumb?” I don’t think people are stupid, really – I believe that some of us are ignorant, and many of us vote against our own interests. It’s a lot easier to understand why people do this in the realm of public policy, though, than to get why they do it in the realm of private entertainment.

"Big Bang Theory" is about a group of friends, some of whom are nerdy scientists and some of whom are women, two of whom are both. Two of the leads, Leonard and Amy, are played by beloved ’90s sitcom stars Johnny Galecki and Mayim Bialik, respectively. One of the characters, astrophysicist Raj, has a thick Indian accent. Another, Bernadette, speaks in a squeaky baby voice. The plotlines pivot around petty dramas between the friends, who do things like meet in Leonard’s apartment, where most of the show takes place, and eat Chinese takeout out of its containers and talk to each other.

There is a laugh track, which isn’t a dealbreaker for me, but it does jar when all the lines being canned-laughed at are so gratingly unfunny. I watched all seven episodes that had aired so far this season and didn’t so much as expel air forcefully from my nose in response to any of the jokes. The closest anything came to being funny was when Bernadette told Penny, whose thing is that she’s blonde, pretty, stupid and incompetent, “Oh, I get it – you want to get a job doing something you’re good at! Well, unfortunately there are no jobs at the sitting-around-all-day-wearing-yoga-pants factory!”

That was as funny as things got. Most of the show’s humor revolves around characters saying layperson-incomprehensible things that have to do with science,  but in the middle of ordinary situations, like “well that’s like the difference between a photon and a neutron!” This could work well, I think, once or twice. This show has been on the air since 2007.

The good news is that "Big Bang Theory" is just bad, not evil. Aside from Penny’s unintelligence being played for “laughs,” the show is relatively progressive in its treatment of gender. In one of the episodes I saw, Penny and Amy and Bernadette are involved in a subplot where Amy, in an attempt to scientifically study something about friendships, tries to pit the friends against each other. In the course of this plot they have several conversations about work, thereby ensuring that the show passes the “Bechdel test” (female characters must talk, to each other, about something other than men).

There aren’t any hot wife/schlub husband jokes, both men and women are seen to be nerds, and there isn’t anything overtly horribly racist going on, except the show’s mostly-whiteness and Raj’s “funny” accent. And the theme song, by the Barenaked Ladies, provides a brief history that begins with the titular “Big Bang” and goes on to cover concepts like Neanderthals using tools; it would not be compatible with a theory of the universe that takes the Bible literally. So that’s something, at least.  There’s hope for America yet.