What movie audiences get wrong about Jennifer Lawrence

The Oscar winner and Internet darling is the planet's biggest action star. So why is she not thought of as one? 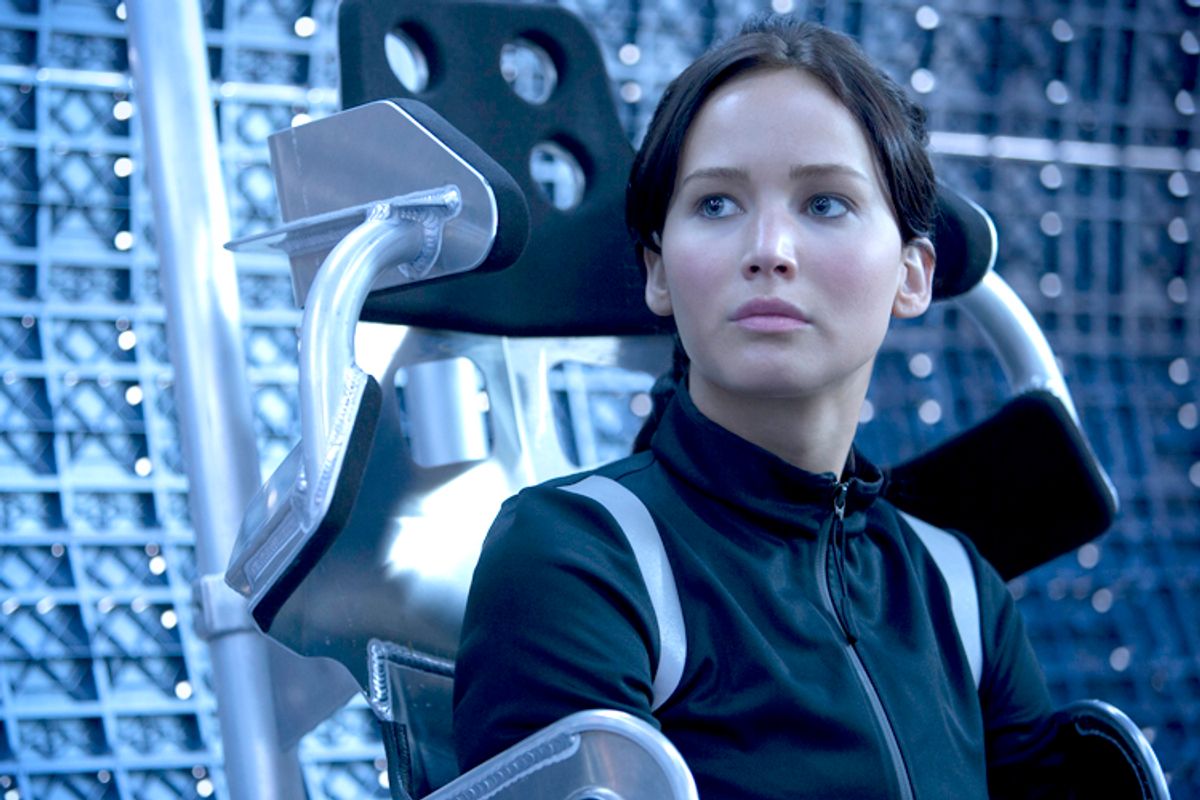 The Hunger Games is on the verge of breaking a record: If this year's first installment of Mockingjay performs in line with previous entries in the franchise, The Hunger Games will be the first series in history to win the yearly box office two years in a row. Even Star Wars and Lord of the Rings never managed that feat, and the honor would put director Francis Lawrence in elite company: Only Steven Spielberg has ever helmed back-to-back yearly box-office champs: E.T. and Raiders of the Lost Ark.

That kind of elite company should make Hunger Games star Jennifer Lawrence the biggest action star in the world (and she's already the most successful action heroine in history). So why is she not thought of as one? She's an Oscar-winner, the Internet's best friend, and an accomplished butt-plug collector, but she's has yet to be in the same breath with Rambo.

We know that female-led action films can do incredibly well; check out the Alien and Terminator franchises if you need evidence of that. And we know, by extension, that women can kick ass and take names in action movies, from the spectacularly gonzo Kill Bill (Vol. 1 or 2, take your pick) to the slick Tomorrow Never Dies. Yet, despite the fact that many actresses specialize in action films, have built their careers in action, and are highly regarded for their skills, they aren’t called “action stars.” They’re actresses, superstars, and movie stars, but rarely are they actually celebrated for being queens of action.

Our relationship to female action stars (yes, I’ll say it) says a great deal about how we view women in film, but also women in society. Actresses are often stuffed into a box of femininity, and the woman warrior is considered to be the antithesis of feminine; think Grace Jones in A View to a Kill: tough as nails, with fly fashion to boot, but framed in very butch, masculine terms. Filmmakers seem to struggle with how to handle women in action movies when they aren’t objects or minor characters, and audiences can’t cope with them either.

It would be a mistake to shove action stars like Angelina Jolie and Uma Thurman into the “action” box just as it would be to force them into the “lady actors” box. Action actresses are so much more than these simple aspects of their acting careers, but it’s frustrating to see their contributions to the action canon simply erased; even just the words “action star” are usually associated with men, not women.

The list of women who are specifically known for their action work, not just those who’ve displayed a dynamic range (like Lucy Liu, who is equally adept on Elementary and Charlie’s Angels, or Shailene Woodley, who sparked a worldwide handkerchief shortage in The Fault in Our Stars and then went on to play the tough-as-nails Tris in Divergent), includes some big names.

Major, headlining, box office-crushing names, like Angelina Jolie, Scarlett Johansson, Pam Grier, Jennifer Lawrence, Linda Hamilton, Sigourney Weaver, and Uma Thurman. Meanwhile, others are hardly to be sneezed at: Katee Sackhoff as Starbuck on Battlestar Galactica was the epitome of the action star, while Michelle Yeoh (who, notably, does many of her own stunts) is a famous actress in her own right and Milla Jovovich has led the Resident Evil series to considerable success.

Women in action aren’t anything new, either; Pearl White was one of the earliest action stars, period, in The Perils of Pauline. She starred in pre-WWI films and led the charge for women in film, but almost immediately thereafter, women were relegated to more sedate, quiet roles. Soon, film stars were hired more for the purpose of being screen sirens than action heroes, and it wasn’t until the rise of actresses like Pam Grier in the 1970s that women started taking the boxing gloves back. It’s notable, too, that blaxploitation films marked the return of women action heroes, and that producers today are increasingly turning to black stars to fill female action roles.

Is the lack of respect for women action stars just about our reluctance to view women as warriors, and our concern that labeling women as action stars might strip their femininity, or is it about more than that? Oscar Raymundo, examining Jennifer Lawrence in The Hunger Games, illustrates that it might have something to do with the difficulty in separating an actress’ public persona from her professional one.

Jennifer Lawrence is a phenomenal actress, and her portrayal of Katniss Everdeen never once ventures into mockery. But I would argue that her beloved real-life persona has taken a life of its own, and it can sometimes ruin the suspension of disbelief that movies require. During some of Hunger Games' most intense scenes, I kept imagining Lawrence giggling to herself and thinking, 'holy crap, I'm riding in a chariot and wearing a fire dress... cool!'

Is this about poor casting of an actress better-suited to physical comedy, though, or is it an inability to distinguish between when an actor is on-duty, and when she is not? Many male action stars have entertaining public personas or interesting public lives, yet we don’t find these distracting when we sit down to watch their films. We’re able to suspend our knowledge of them as human beings to enjoy an action movie, yet we can’t seem to do that with women.

Kyle Buchanan at Vulture points out another issue with respecting female action stars: Many of them, bluntly, don’t have a build that would seem to lend itself to action. Actresses, no matter what genre they perform in, are under tremendous pressure when it comes to physical appearance; look at the collective global moaning when Angelina Jolie chose to undergo a preventative mastectomy, for example, and it’s worth considering what happens when you Google any female star’s name and the word “fat.” Even action stars are forced to remain within the boundaries of a very narrow body type, both literally and figuratively.

It’s hard to believe that a woman with an extremely small build and no obvious muscle would hold up well in a fight, even though many female action stars are actually incredibly strong, thanks to the endless hours of Pilates and core exercises they do to stay thin.

“Saldana resembles a supermodel who could be toppled not just by a gang of thugs but a stiff breeze,” Buchanan writes of Columbiana. “Saldana's a talented actress who can sell ferocity with her face, but her slender arms could snap in two if a stuntman grabbed her the wrong way, and when she roundhouse kicks an assailant, Saldana looks like a spider doing a cartwheel.”

Dodai Stewart at Jezebel made note of this as well when the casting for Haywire was announced and the public learned that notable MMA fighter Gina Carano would take the lead role. She wouldn’t be the first athlete to make the jump into film, and she has the body of, well, an MMA fighter, not a Hollywood starlet. She’s muscular and powerful, with the ability to do all her own stunts. She is, indisputably, an action star: Yet, she’s still treated in many casual biographies (like her Wikipedia entry) as an “actress,” with no qualifying descriptors.

At Time, Eliana Dockterman suggests that the future for female action stars lies not in brute muscle, but in smarts:

You may notice that these more recent films increasingly capitalize on Johansson’s intelligence and not just her body: she’s played and tricky alien, a computer, and now in Lucy, the smartest woman in the world. So while the success of Lucy may mean that Johansson can helm a Black Widow movie, taking such a simplistic roles could feel a step down for Johansson.

It may be a sharp observation, but it’s not entirely fair to women who are making the action genre what it is today, not to mention those with careers rooted in action movies. Women can be, and are, action stars; the only question we should be asking ourselves is why we’re so hesitant to call them that.