"You and your scarf have no place here"

I committed to wearing a hijab at the age of 10. As a United States immigrant, each day is a test of my resolve 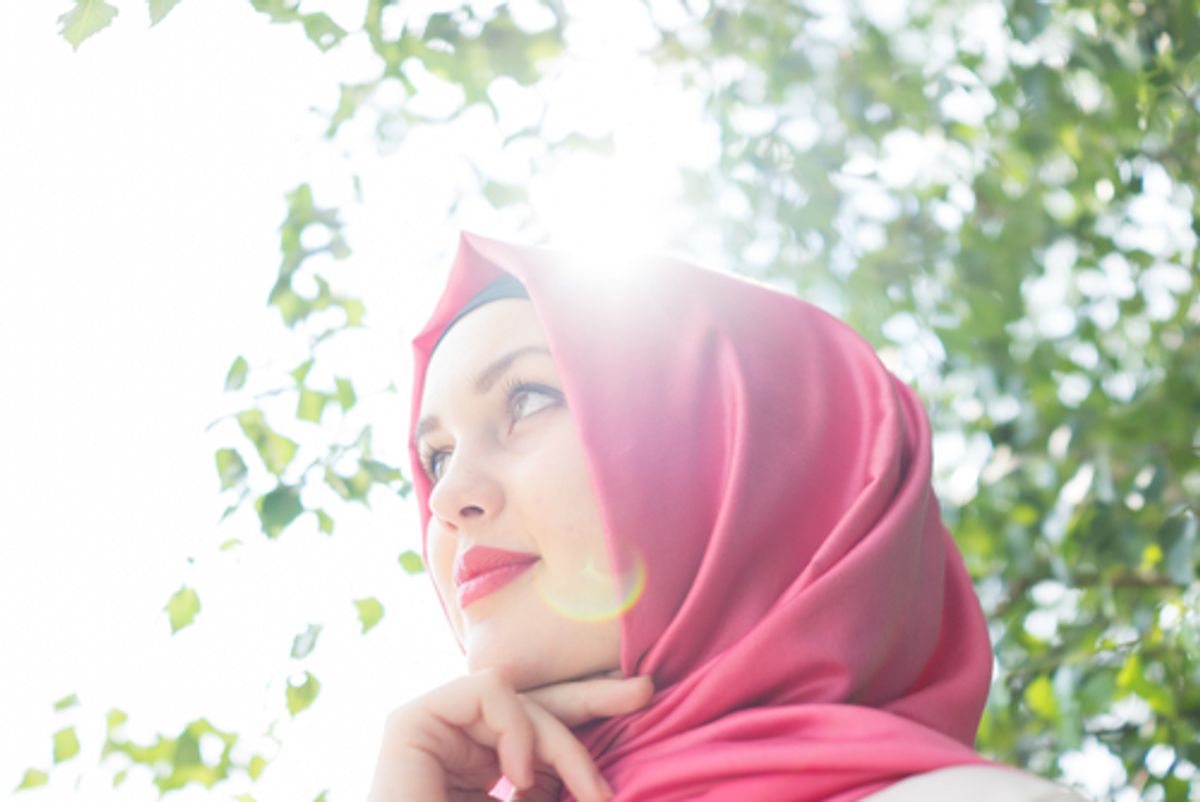 The first time that I felt silenced, an older woman came up to me at a mall in western Massachusetts and said, “You and your scarf have no place here. We’re free in America.” Her anger stunned me to silence, as I watched her brusquely walk away. I was 15. Raised by my mother to be proud of my identity, I felt it all stripped from me in that one moment.

Recently, I read about Tanya Smart’s harrowing experiences in the Daily Telegraph. Smart, a non-Muslim, is female reporter who wore a niqab—a word she frequently alternated with burqa (the former is a veil, the latter covers the entire face and body)—to “see how people would react” as she went about her day in Sydney, Australia. I felt like I was 15 all over again—palms sweaty and nervous—as I read her account of how she felt “straight away [like] I did not fit in” as a visible minority in Sydney. She then described her walk around Lakemba, a Muslim neighborhood where she felt like an outsider in her T-shirt and pants. It was only when Smart covered herself in the niqab that she felt safe, though she reported feeling afraid of the reaction she would get from the immigrants around her once they realized she was actually Australian.

As I finished reading the article, it took me a moment to regain composure before frustration kicked in. This, Smart said, was the most terrifying experience she has ever endured, rife with moments of alienation and feeling like an Other. She had created a reality she believed Muslim women—especially covered Muslim women—go through daily, one in which every move is cloaked with fear of reprisal, where strength and empowerment have no place. What was even more disconcerting to me was the fear Smart expressed of being discovered and exposed as an Australian Muslim, as though the two realities are so distinct that they can never overlap. What was more, she was concerned that she was going to be exposed as a fraud to the Muslims around her, masquerading as one of them.

Within the Muslim faith, women are asked to dress and behave modestly. For many, that means wearing the hijab, a scarf that covers the hair. Within America, only 43 percent of Muslim women choose to cover, the rest choosing not to do so. For some Muslim women, choosing to cover their face with a niqab is their way of covering. Far fewer wear the burqa, which covers the head and body entirely. Hijab is considered foreign and alien to the West.

Smart isn’t the only journalist to conduct this experiment—she is part of a tradition of similar undertakings, each reporter attempting to provide a glimpse into the world of covered Muslim women. In 2010, a Kentucky woman wore a hijab for a month, revealing an experience that “silenced, but simultaneously ... brought unforgettable words.” The writer found that the experience made her uneasy, but was unable to pinpoint certain encounters because they were rarely transparent. The writer concluded that “what you see and hear from the media is fallible—if you want the truth, talk to a Muslim.” Yet her very experiment failed to do that. In 2011, an editor for The Huffington Post chronicled her endeavor to become “Islamic,” describing the niqab she chose to purchase as “something an executioner would wear.” Throughout her piece, she says things like “the sight of fully veiled women has become disturbingly familiar” and “there are people right here who want to shroud women … to make us all submissive and invisible.” In 2012, a VICE journalist decided to explore “what life was like for women who have been consigned to wear the least-revealing piece of clothing of all time,” her article sexualizing what she felt life was like for a woman in niqab.

More from DAME: "Just Because I'm Pregnant Doesn't Mean I Want Your Advice"

The reality is that the Western media rarely listens to covered Muslim women attempting to share their lives and realities, and instead asks their readers to heed the words of those who are privileged enough to be given the voice, rather than having to fight for one, and who have appropriated those experiences as their own.

Contrary to what many report, most Muslim women choose to wear the hijab. In my lifetime, I have only met several dozen Muslim women that wear a niqab, and none that wear a burqa. I’ve seen more non-Muslim women “experiencing life as Muslim” wear a burqa than actual Muslim women. Granted, I live in the United States, but even my Syrian relatives never wore a burqa or niqab, and many chose to wear hijab in the later part of their lives. I know many women who began wearing the hijab, then later in life, chose to take it off. The opposite is also true. The reality is, the choice to cover is, in itself, complex and less sure than many attempt to frame it.

I chose to wear the hijab when I was 10—the result of a bet with my mother, following my visit with a close friend who had recently begun wearing one. “I bet you can’t do it,” she teased me. I’m fiercely competitive, so of course I accepted the challenge. Nowadays, my understanding of the scarf I wear is more nuanced, but each morning, I make the choice to continue to wear it because it has woven itself so firmly within my identity. Yet there are moments where the harassment exhausts me, and those are the days I question my decision most.

Many Muslim women have spent their lives growing up in secular societies. As an immigrant to the United States, I have never felt more patriotic than when I wear my hijab: It makes me feel hyperaware of my identity but also pushes me to fully understand my American nationality. Life as a covered Muslim woman in a “Western” society is nothing less than natural for those who have been doing it all their lives. I have faced discrimination and profiling based on my appearance. Yet those experiences only serve to solidify my identity as a Muslim American—motivated by my belief in individual freedom, my faith meshes in seamlessly with my nationality. On a daily basis, it is normal to receive stares and remarks while I walk home, but life is no less different—a little more alienating, to be sure, than that of an uncovered woman. I’ve learned to answer uncomfortable questions with a grin and well wishes, and remain starkly conscious that those around me are likely watching everything I do, wherever I go.

Once, during college, a professor attempted to block me from a senior experiential trip on the explicit basis of my headscarf. She sat me down and informed me that my scarf would make it impossible for me to attend the trip. I found my ambitions shattering. Although I fought the decision with the help of the college administration, for the rest of the course, the professor saw it fit to make comments about what she perceived to be my life experience, primarily on the basis of my hijab. Time and again, attempts at sharing the reality of my narrative were dismissed as irrelevant. How can my very real personal experiences be unnecessary, when the topic of conversation is that of my life as a covered Muslim woman? It’s as though the people attempting to understand my reality are holding me hostage. Those who are here to help have collectively silenced me.

More from DAME: "This Is Why Sex Ed in the U.S. Is a Disaster"

Ultimately, silencing Muslim women’s narratives serves to silence the complexity of voices out there today. By choosing instead to amplify the voices of women playing dress up and “understanding” the experiences of a diverse population, media outlets and consumers are effectively sending the message that Muslim women are a minority to silence. Furthermore, it serves to “other” a minority that, in recent years, has come under the scrutiny of mainstream media for the actions of a mentally unstable few.

Maybe the answer to all this is that we fear learning just how complex, layered, and similar the lives of Muslim women are to our own. Which is true for me: I live my life unabashedly, make decisions that I regret moments or days later, say things I shouldn’t, try things I never thought possible, and get up every morning excited for the next day. As a covered Muslim woman, I am told regularly by those around me that I am nothing like the picture they had in their minds of “normal” Muslim women for these reasons. Granted, I speak from my own experiences, but the truth of it is, I don’t think that my experiences are very unique. It’s cliché to say that Muslim women are just like everyone else, because we aren’t. We’re a little different—but that’s okay. Just do me a favor, though: If you want to know how a Muslim woman lives day to day in the secular world: Ask her. Read her work. Listen to her stories.