Bill Cosby loses control: Comedian no longer dictating the narrative -- and it's about time

As Barbara Bowman and other women continue to speak out, the press is finally catching up. Here's what happens next 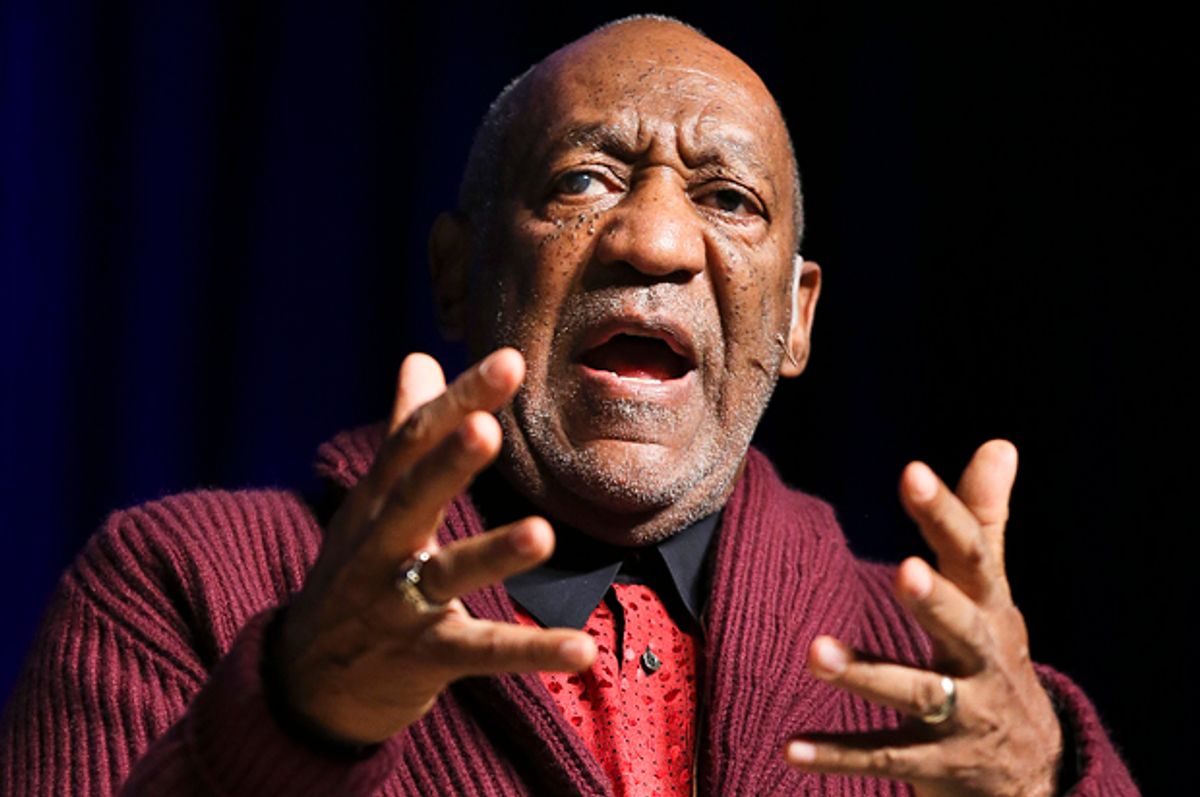 This weekend, NPR “Weekend Edition” host Scott Simon did his job. He covered the news. During an interview with Bill Cosby about the comedian’s recent philanthropic work, Simon asked about the rape allegations that have been following him, publicly for more than a decade and privately since the 1980s. Simon asked because the allegations, though not new, are, in fact, news. And, as he explained on-air, “I’m in the news business.”

Cosby's response was, as ever, total silence. His lawyer then released a statement saying Cosby "does not intend to dignify these allegations with any comment."

Simon’s question wasn’t radical or even brave. (He acknowledged as much in a series of tweets over the weekend.) This is simply what a minimum standard of public accountability looks like. It’s covering the news, even when the news might upset. In the last few weeks, Barbara Bowman published yet another piece detailing her account of being drugged and sexually assaulted by the comedian, the ill-conceived #CosbyMeme backfired magnificently and a three-minute bit from Hannibal Buress caused Google search hits for “Cosby” and “rape” to jump.

It would be nice to think that the public would have been livid if Simon had sidestepped the issue in favor of more friendly questions about Cosby’s art collection, but we know that’s not true. The reason Cosby is where he is today -- with a Netflix special, a possible NBC show in the works and a decades-old platform as a moral authority -- is precisely because we’ve all been so willing not to ask.

Cosby biographer Mark Whitaker omitted the 2005 civil case and subsequent court settlement related to Cosby’s alleged assault of Andrea Constand from his book. He also erased from the record the 13 women (now 14) who said that they, too, had been drugged and sexually assaulted by Cosby. It would be difficult to count the number of television appearances or magazine profiles that have run in the ensuing decade without a single mention of the allegations. Cosby has never been asked to comment (beyond statements through his lawyer) about the more than a dozen women who say he is a serial rapist. Why? Because he said he wouldn’t talk about it. And the rest of us said, That’s fine.

But in a testament to the bravery of the women like Bowman and Tamara Green who for decades have been telling their stories despite the public’s indifference (as well as the power of the Internet to hold the media’s feet to the fire), Cosby’s teflon image may be cracking. It seems that the public is finally acting a little unsettled about viewing an alleged serial rapist as a beloved cultural icon. It’s long overdue, and such an inconceivably small measure of progress, but it’s something that just wasn’t happening before. Journalists are finally making Cosby -- and his public -- uncomfortable.

So what happens now? Cosby performed in Erie, Pennsylvania, on Sunday night, but canceled an upcoming appearance on “Late Show With David Letterman.” It's easy to speculate that it's because he’s scared of what additional public scrutiny might reveal, but at least one thing is clear: Cosby, who for years has been acting as though addressing the allegations is beneath him, is now on the defensive.

If the comedian does keep up future media appearances, perhaps other hosts and journalists will share Simon's commitment to reporting on the news. To ask important questions rather than bow to the whims of Cosby's media handlers. Perhaps there will be some future question about why he won't discuss the alleged rapes. Why he doesn't want to try to clear his name, share his side. Why he doesn't feel compelled to respond to Bowman, whose accounts have been explicit, detailed and disturbing. Or how, contrary to what his lawyer has argued, Constand's allegations were never "discredited" -- they were settled out of court under undisclosed terms.

Perhaps there will be questions for NBC executives about whether they feel comfortable giving a platform to an alleged serial rapist. Perhaps there will be questions for Barbara Bowman about how the media can avoid the mistakes it's made in covering Cosby, how "caution" and total erasure are not the same things when it comes to reporting on sexual violence.

When Simon asked Cosby his question, he said that it gave him no pleasure. He told him that fans who loved him would probably like to hear him address the charges. Cosby’s silence was revealing. He didn’t say, Those allegations are false and wrong and an insult to real survivors of sexual violence. He didn’t say anything. It was more silence from a man whose only response has been silence.

For years, the comedian has relied on the public’s reflexive distrust of rape victims to fill those silences with our own victim-blaming and justifications about what our celebrity heroes would and wouldn't do. We have, in other words, been contracted to do his dirty work for him. We have done what Cosby's lawyer asked of us, to focus on his career and let the word of one "good man" bury the stories of more than a dozen women asking to be heard.

For decades now, Cosby has been able to control his own narrative. Barbara Bowman and Tamara Green have been trying to wrest it back and clear space for all victims who feel silenced when taking on a powerful man. It's taken far too long, but it seems that the public and the media may finally be ready to give them that chance.