College kids' homeless hell: Why a secret, massive crisis is getting even worse

While colleges spend billions on new facilities, you'd be shocked where students are staying. Here's the dark truth 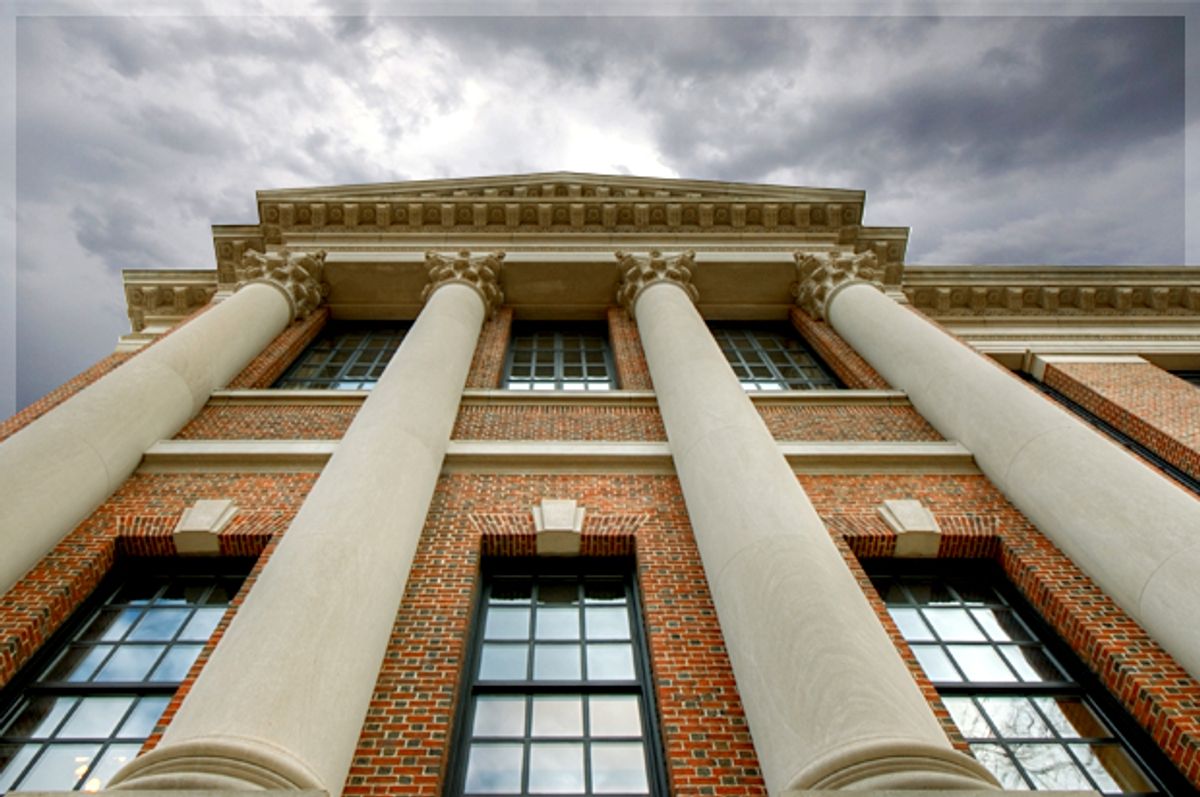 With colleges spending billions on lavish housing developments, it's easy to think that all students are living large. The sad reality? Student homelessness in higher education is a larger issue than most realize, with tens of thousands across the country homeless.

There are questions on the FAFSA (free application for federal student aid) addressing homeless students — or “unaccompanied homeless youth” as they're officially called. Salon received numbers from the National Association of Student Financial Aid Administrators (NASFAA), who obtained them from the Department of Education via the Freedom of Information Act, as to how many students indicated homelessness on their FAFSA. Over 56,000 college students were homeless in 2013. As of early August, almost 46,000 college students declared homelessness for this year.

According to Justin Draeger, president of NASFAA, that number could be much higher. “One of the challenges we have with unaccompanied youth and homelessness is we're trying to quantify something we don't totally know,” Draeger told Salon. “It's trying to figure out how many people don't we know. We know they're out there, but we can't count them because they're not applying for financial aid. So one of the challenges we have for this group is intervention early enough so that they understand that college is a possibility, it's an opportunity for them and we can get them through the application process. So I would say the numbers don't represent the full picture of unaccompanied youth and homelessness in this country.”

In the sort of bizarre, ironic, horrifying situation only possible in America, student homelessness is becoming a serious problem while colleges continue to build more and better housing.

Investment in the student housing sector has more than doubled globally since 2007. More than $7 billion was injected into student housing in 2013. That number will likely increase for 2014 as colleges are continuing to spend billions of dollars on lavish amenities. Auburn University has a Tiger paw-shaped swimming pool, a corkscrew track, a pool with a rock climbing wall, and rooftop gardens. Louisiana State University has a lazy river.

Wichita State University recently constructed a residence hall, which includes a dining hall and a coffee shop, that cost $65 million. Naturally, the students will be footing the bill for it.

President and CEO of the Kansas Board of Regents said the new residence hall “can't do anything but dramatically improve student life on campus.” One must wonder if he knows it'll cost students nearly twice as much money per year to live in the new facility. Even the smaller universities are pumping millions into student housing. The University of Alaska Southeast finished a $14 million residence hall last year.

Don't laud lush luxuries as the Rebirth of Higher Education. Making post-secondary schooling more about The College Experience™ (eating, drinking and fucking like you're on a four-year vacation at a resort hotel) is detrimental to the students' long-term financial health.

The superfluous student housing developments are increasing room and board costs. A 3.6 percent increase in costs is nothing to scoff at. College students (at least the ones who live outside of the privilege bubble) aren't known for their affluence. To a student named Jake Stevens, housing costs became so great he became homeless.

Stevens isn't alone in his trials. Salon spoke to Barbara Duffield, director of policy and programs at the National Association for the Education of Homeless Children and Youth (NAEHCY), about the problem of student homelessness.

“The students we work with struggle to have their basic needs met,” said Duffield. “So housing costs do become a significant barrier to them staying in school ... Some of them will do things like try to be a resident adviser or get work-study or do something along those lines, but they really struggle during breaks. They really struggle because housing costs are generally high and they're trying to go to school and they're entirely responsible for themselves and not getting any help from their parents.”

Many might believe a homeless student wouldn't and couldn't seek education, but Duffield finds the opposite is true.

“They see school as the way out,” Duffield said. “I think a lot of people think that if you're homeless, education is the last thing you worry about. You wouldn't try to get a college degree, but that's not where these kids are at. They know school is the ultimate way out.”

But dorms are hard to pay for, especially if you can't even fill out certain forms because you don't have a permanent residence. Duffield elaborated:

Financial aid — that's a tremendous barrier. That's the No. 1 problem, is barriers to financial aid for homeless students. That's the No. 1 category of calls that we get because the financial aid offices don't necessarily understand the federal guidelines, so they grill these kids for paperwork they can't provide and so we have to intervene a lot, we intervene with a lot of higher-ed directors and go to bat for students on financial aid. Financial aid, housing and basic support on campus are the main things. There's no address, and particularly for the young people — the population we're zeroed in on, the parents aren't supporting them. They're not in their life, and it's impossible to, under 24, unless you fit one of the exceptions which these students do — you're going to be asked for parental income, parental signatures, and they can't provide that. Federal law says if you're unaccompanied homeless youth you're independent, they'll also ask you for proof of that. A lot of students may not have a letter because they didn't stay in a [shelter] because there's no shelter or the shelter is full or any number of situations.

And while Duffield noted that the official reported number of homeless college youths did decrease from 2012 to 2013, she said that calls to the NAEHCY hotline had only increased.

Draeger, too, was skeptical of the declining numbers.

“You can't really take them at face value when you try to determine trends, especially when you have economic ebbs and flows,” he said.

Perhaps part of the solution to the student housing crisis is a reimagining of what housing is supposed to mean and what goal it's supposed to accomplish.

“Company X is an early stage investment company that makes investments in student entrepreneurs across the country,” said Denner. “So whether you're an undergrad student or a grad student or a law student, a dental student, whatever you are — if you're a student and you have an idea, Company X wants to hear about it. And what Company X does is not only make an economic investment, but they also make an investment in terms of time, in terms of relationships, in terms of introductions, and so on.”

Company X isn't exclusive to the dormitories owned by Campus Evolution. Any student can participate. The same can be said for Art Battles U.

“Art Battles U provides a platform for artists, for college artists, to showcase their talents and skills with the goal of discovery,” Denner said. “It’s taking these students that are doodling and drawing in their dorm rooms and wherever and fighting with their parents every semester — 'Why are we paying $30,000 for you to be an artist?' and we’re saying, 'Listen. That’s your passion and we love it and we’re going to provide you a stage to show the world what you can do.' This is in the hope of, again, 1) selling your artwork that you create, and 2) we’re creating a retail line, a T-shirt line, with that artwork that is created, so allowing the students to share in the profit.”

Denner's approach is an innovative one. Students have been putting constantly increasing amounts of money into college. When will it be time for colleges to put the money back into the students? Perhaps that's the only solution to the current crisis.

This, and tens of thousands of homeless youth, are the upshots of post-secondary education's housing system.