Gentlemen, we need to talk about what you're wearing 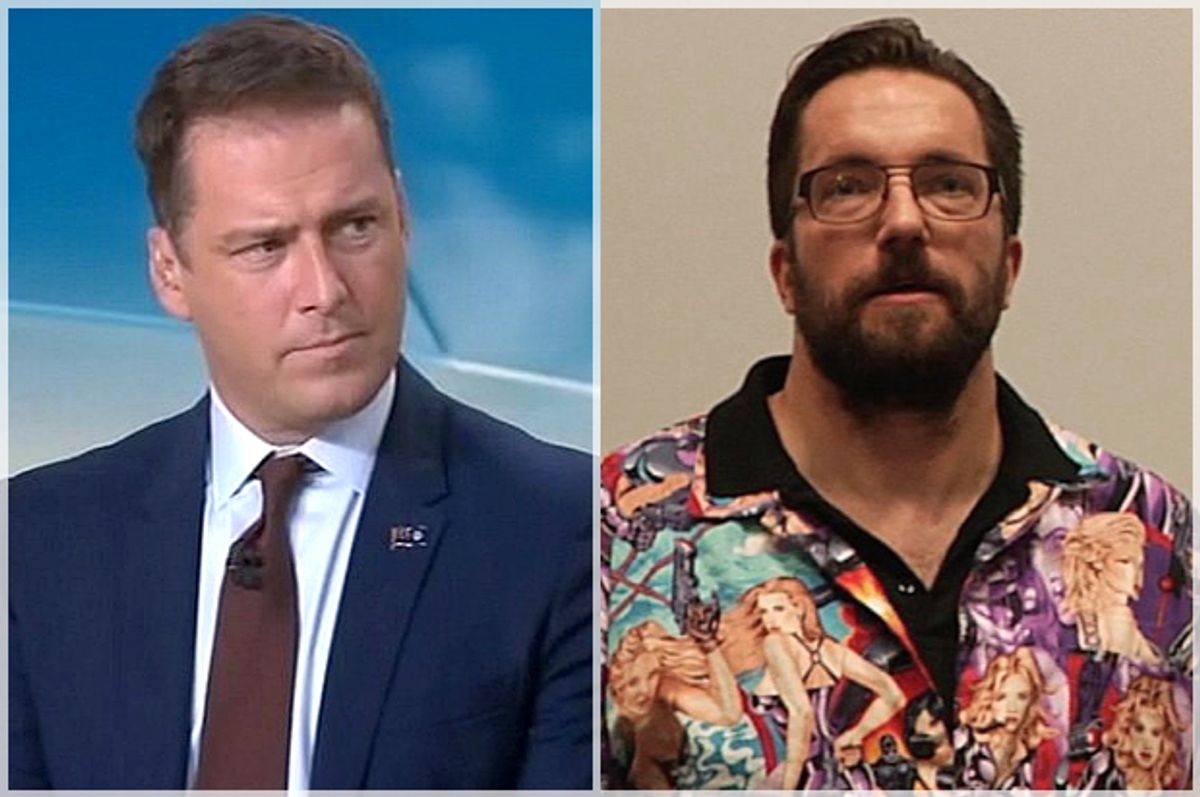 In many ways, it turns out that last week's "shirtstorm" over Dr. Matt Taylor's sartorial choices was just the setup of a story that was a full year in the making. But finally, on the other side of the world this weekend, Australian anchorman Karl Stefanovic provided the kicker.

It was just a few days ago that Taylor's babe-festooned button-down shirt became the most argued over, commented on item of clothing in recent memory -- when the Rosetta Mission scientist's TV moment of comet landing triumph was all but surpassed by debate over the appropriateness of his sexy lady shirt. As Atlantic writer Rose Eveleth observed, opening the can of worms, "No no women are toooootally welcome in our community, just ask the dude in this shirt." Pornographer Greta Christina weighed in with the declaration that "There are appropriate places and times to wear clothing with sexual imagery on it — sex parties, erotica readings, erotic art openings, I can probably think of a few others. But the very public announcement of a major event in the history of scientific discovery — landing a robot on a comet! — is not one of those places or times." Taylor himself, visibly tearful, soon came forward to say, "I made a big mistake and I've offended many people and I'm very sorry about this." There was continued outrage over the shirt. There was outrage over the outrage, cresting with Boris Johnson's outstandingly hyperbolic Telegraph piece, in which he called Taylor's apology "something from the show trials of Stalin, or from the sobbing testimony of the enemies of Kim Il-sung, before they were taken away and shot. It was like a scene from Mao’s cultural revolution when weeping intellectuals were forced to confess their crimes against the people."

All this. Over a piece of clothing. In part because it was a piece of clothing worn by – shocking twist! – a man. This wasn't a Janet Jackson "wardrobe malfunction" to corrupt our youth. This wasn't a scantily clad Miley Cyrus shaking it at the VMAs, or Rihanna's controversial CFDA dress. This wasn't the sidebar of the Daily Mail. Sample headlines from Monday alone: "Angelina Jolie wears a comfortable ensemble as she takes in the view," "Melissa McCarthy continues to show off her 45 pound weight loss," "Jessica Seinfeld wears a VERY sexy ensemble," "Anna Kendrick and Jena Malone get leggy in chic outfits," "Megan Gale flaunts her stunning post-baby body in figure-hugging dress." We are used to women's clothing – and by extension, their bodies – being commented on, being criticized. It's such a commonplace occurrence that the Vagenda earlier this year offered hilariously "normalized" versions of sensational headlines about females and their attire. (My favorite is "Woman had skin all along.") But watch a man be held accountable for his choice of attire, and the fabric of reality splits open.

And if you need further evidence of the split between the way men and women – and the way they dress – are perceived, there's the experiment of Karl Stefanovic. Over the weekend, the Australian "Today" co-host explained, "I've worn the same suit on air for a year — except for a couple of times because of circumstance — to make a point. Women are judged much more harshly and keenly for what they do, what they say and what they wear." He says that until his big reveal, his choice had gone unnoticed. "I’m judged on my interviews, my appalling sense of humor — on how I do my job, basically," he says, "whereas women are quite often judged on what they’re wearing or how their hair is … I think in this situation for women on TV, it’s mainly women judging women on what they wear. So is that sexism?" And his co-host Lisa Wilkinson affirms, "When I get criticism, more often than not it’s from women." The gaze is complicated.

My own feeling about Taylor's shirt was that it was unprofessional, given the situation, but not intentionally malicious. That he didn't think of that before he put it on says how unconsciously reinforced that culture of male-as-default in science and technology is. I don't think he's a bad person; I think he's a person who's probably learned something about the unspoken messages we communicate, and that's good. I also think the mostly male outrage that a person could be criticized for a wardrobe choice – criticized in the midst of what's supposed to be that person's big moment of triumph, is pretty funny when you've watched Hillary Clinton and Angela Merkel repeatedly mocked for their pantsuits, when we have entire TV shows based on making fun of people --- almost exclusively women --  for their clothes, and when schools impose draconian dress codes because girls are considered "a distraction." We're used to not talking about the way men dress, or questioning the appropriateness of it. In different ways, Dr. Matt Taylor and Karl Stefanovic have shaken that habit up. And in different ways, that's reason to thank them.