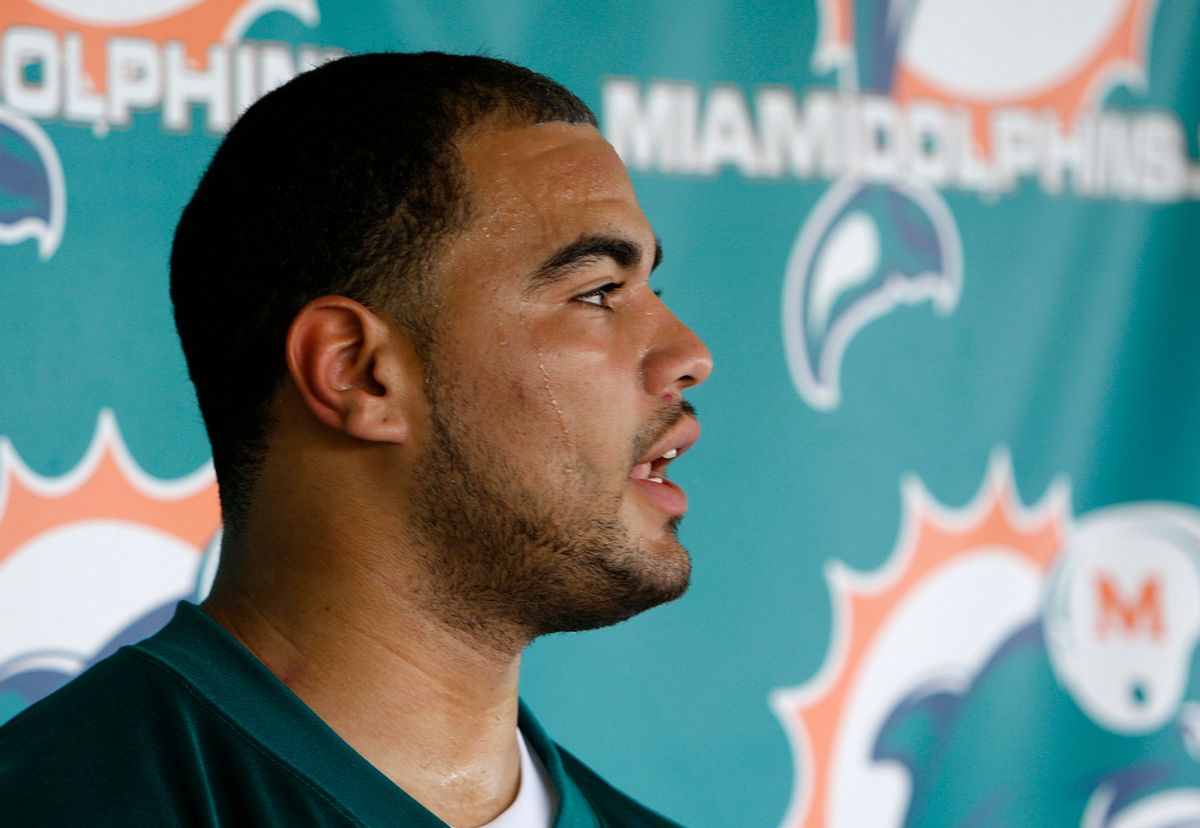 In 2010, then-Miami Dolphins defensive end Phillip Merling was arrested after a domestic dispute at his home, where he allegedly hit his then-fiancée, Kristen Lennon, on the head. She was two months pregnant at the time. The charges against Merling were eventually dropped after Lennon failed to testify against him -- because, she says, she was eight months pregnant and unable to travel. Months before that, immediately after his arrest, Merling was returned to the Dolphins training complex in an unmarked police car, ready for training camp.

According to a damning report by the New York Times, Merling's quick return to his football career is just one element of "special treatment" he received following his domestic violence arrest, which allegedly resulted from local law enforcement's tight relationship with the Dolphins. The Times looked into the circumstances surrounding Merling's arrest and subsequent release, which indicate possible mixed allegiances that could contribute to the NFL's ongoing domestic violence problem:

Minutes after Mr. Merling was taken into custody, Stuart Weinstein, the Dolphins’ longtime security director, was working his contacts in the Sheriff’s Office, trying to confirm the arrest and get information on Mr. Merling’s status. At one point, Mr. Weinstein asked a commander who worked side jobs for the Dolphins to notify him when Mr. Merling’s bond was posted. The commander said he would, according to an internal affairs investigation.

Mr. Merling was booked on charges of aggravated domestic battery on a pregnant woman. Almost all inmates are required to leave the jail through the public front door and arrange their own transportation home, but Mr. Merling was granted an unusual privilege: He was escorted out a rear exit by a deputy, evading reporters. The commander, who was off duty and in uniform, drove Mr. Merling in an unmarked car to the Dolphins’ training complex 20 minutes away.

After Mr. Merling met with team officials, the commander drove him home to get his belongings — even though a judge had ordered Mr. Merling to “stay away” and avoid any potential contact with Ms. Lennon.

The Times details similar situations involving players for the San Francisco 49ers and Pittsburgh Steelers have also occurred, illustrating a much larger problem -- not just of special treatment for Merling, but of law enforcement's closeness with the NFL. "When allegations of crimes such as domestic violence arise," the Times notes, "the bond between officers and team security officials can favor the player while leaving the accuser feeling isolated."

But accusers are not simply shut out; they are also at risk of further violence. Lennon, who has since relocated to South Carolina, told the Times that Merling has continued to harass and threaten her in the years since his arrest:

In July 2011, neighbors called the police at 4 a.m. when they heard commotion at an apartment she was in. When officers arrived, Ms. Lennon told them that Mr. Merling had been banging on the door before he put numerous dents in her car. [...]

A year ago, a judge in South Carolina issued a final order demanding that [Merling] pay tens of thousands of dollars [in child support]. When Mr. Merling arranged a meeting with Ms. Lennon to give her a check, she ended up calling the police, saying he punched her in the chest, according to a police report. The next day, she told a judge that he had also crushed her cellphone. [...]

[In] July, Ms. Lennon called the police, saying Mr. Merling had come to her home late at night and tried to break in the front door. The dents in the door are visible.

Merling has not played for the NFL since the fall of 2013, when he moved back to South Carolina.