The hip-hop community is convinced Reagan oversaw a vast trafficking network during the crack epidemic. Is it true? 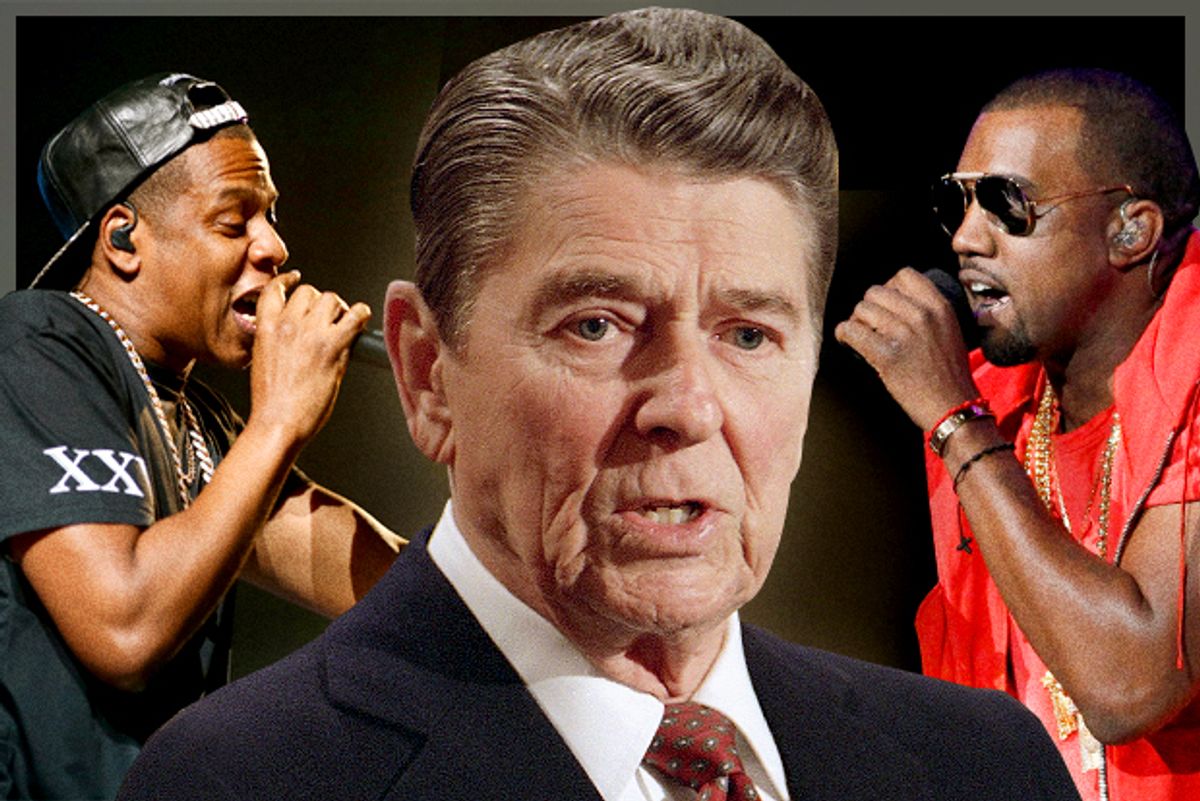 Two recent films are reigniting a debate that was never really settled, not for everyone: Did President Ronald Reagan permit (or even facilitate) the sale of tons of cocaine into the American inner city during the height of the crack crisis? It’s likely that audiences of "Kill the Messenger" and "Freeway: Crack in the System" will be shocked to hear the allegations. The reverence shown Reagan, much of it bipartisan, shields the late president’s legacy from the Iran-Contra affair’s web of gun-running, terror support and narcotrafficking. Reagan, so grandfatherly, so esteemed, couldn’t have possibly presided over such criminality, right?

There’s a good chance your favorite rapper indicted Reagan long before these new films. That Reagan permitted or actively facilitated a massive influx of cocaine during the 1980s is not even an allegation in the hip-hop community -- it’s accepted fact, political bedrock. And it’s not underground agitprop artists no one’s ever heard of making the claims; it’s household names, legends, global superstars.

Jay-Z has made the allegation multiple times, both on records and in print. On 2007’s “Blue Magic,” Hova, a former crack dealer, raps:

Blame Reagan for making me into a monster

I ran contraband that they sponsored

Before this rhymin stuff we was in concert

Jay even flirts with American sacrilege and makes a faint equation with Osama bin Laden on his 2003 remix of Punjabi MC’s “Beware of the Boys”:

It's international Hov, been having a flow

Before Bin Laden got Manhattan to blow

Before Ronald Reagan got Manhattan the blow

Long before al Qaeda’s attack on the World Trade Center, Hov says, Reagan had already decimated the city (or parts of the city) with his “blow.” The parallel construction of the lines likens the two figures in a way. Jay repeats the accusation in his 2010 autobiography "Decoded," in which he expands the indictment to involve Reagan’s simultaneous escalation and racialization of the “War on Drugs.” Platinum-selling artist Pusha T, signed to Kanye West’s G.O.O.D. Music, echoes Jay-Z’s dual indictment in his music, considering both the alleged narcotrafficking and the concurrent drug war. Pusha also delivers nice wordplay on “Along in Vegas,” with the line “Reagan era I ran contraband,” which embeds the phrase “Iran Contra” in the lyric about Pusha’s former life as a dealer.

Kanye West, arguably the heir to Jay-Z’s throne, makes the claim as well on his 2005 “Crack Music”:

How we stop the Black Panthers?

Ronald Reagan cooked up an answer

Kanye nudges the allegation into conspiracy theory territory, as many do, suggesting that the trafficking was expressly intended to quell black radicalism brewing in the increasingly desperate inner city during the 1970s and ’80s. 2Pac offered a similar theory on his much-beloved “Changes”:

Give 'em guns, step back, watch 'em kill each other

No evidence exists to support these claims, and the overblown propositions potentially distract from the ample available evidence pointing to criminality on all three fronts of Iran-Contra: arms sales to Iran, support for Contra guerillas, and the bringing of Contra-based cocaine into the country. The single surviving memo from Colonel Oliver North’s infamous “shredding party” reveals the administration’s arms sales to Iran, a state sponsor of terrorism according to the Reagan State Department. The 1989 Kerry Committee report found that “[i]t is clear that individuals who provided support for the Contras were involved in drug trafficking” and that “[i]n each case, one or another agency of the U.S. government had information regarding the involvement either while it was occurring, or immediately thereafter.” The report goes on to detail how U.S. officials “failed to address the drug issue for fear of jeopardizing the war efforts against Nicaragua.”

So while a sturdy case can be made for willful negligence on the part of the Reagan White House to stem the flow of cocaine, the less defensible cocaine-as-social-control theory remains a popular one. Yasiin Bey (BKA actor/rapper Mos Def) offered his version on his 1999 classic “Mathematics”:

Nearly half of America's largest cities is one-quarter black

That's why they gave Ricky Ross all the crack

Bey refers to “Freeway” Ricky Ross, the subject of "Freeway: Crack in the System," allegedly the primary conduit through which the Contras’ cocaine flowed into the American inner city. Two rappers, former Jay-Z labelmate Freeway and superstar Rick Ross, both derive their stage names from the Los Angeles kingpin. At its height, Ross’ coast-to-coast coke empire was selling half a million crack rocks per day. The LA Times reported on the infamous crime boss in 1996, finding that "if there was one outlaw capitalist most responsible for flooding Los Angeles' streets with mass-marketed cocaine, his name was 'Freeway' Rick." Ross himself claims that his connection was a CIA agent, and the CIA itself admitted to turning a blind eye to Contra cocaine traffickers in the 1998 report from the agency’s Inspector General, but theories based on a master plan to chemically subdue black Americans are too outlandish to be considered.

Before Jay, Kanye and Yasiin Bey were Golden Era icon KRS-One and Rage Against the Machine’s Zack de la Rocha, whose 1998 “CIA (Criminals In Action)” took aim at the intelligence agency’s involvement in the affair. Forming a trio with The Last Emperor, the rappers offer a critique in the vein of Kanye and Yasiin Bey’s, but both broadened and more substantive than the latter’s accusatory couplets. The song weaves together postcolonial theory and critiques of neoliberalism, imperialism and the surveillance state to situate alleged government narcotrafficking in a wider web of power. KRS and de la Rocha exchange lines in the song’s hook:

You claim I'm sellin crack, but you be doin’ that!

You know the cops, they got a network for the toxic rock!

“CIA (Criminals In Action)” was perhaps the first substantial accusation of Washington’s narcotrafficking. Nearly 15 years later, the most recent lyrical assault of note, Atlanta rapper Killer Mike’s 2012 “Reagan,” echoes the song’s expansive critique and demonstrates that the anger felt toward Reagan has both intensified and spread in the intervening years. The song interrogates the national security apparatus, the prison industrial complex and racism from Reagan to the present, which, by including President Obama in the indictment, presents persistent Reaganism as the real danger.

“Reagan” is a fan favorite from Mike’s album "R.A.P. Music," a collaboration with Brooklyn producer El-P that made the rapper the new darling of Pitchfork and other indie tastemakers. On Rap Genius, the song’s lyrics have been viewed nearly twice as often the next-most-popular song on the album. While the early anti-Reagan songs communicated the message among the rap underground and traditional hip-hop audiences, Killer Mike’s angry anthem is a favorite to a largely white listenership. In live performances, Killer Mike often recites the song a capella, despite the track’s bombastic production, in an attempt to drive the lyrics home to white, middle-class audiences. Mike concludes the song in concert by rousing the audience to join him in repeating the song’s last line: “I’m glad Reagan dead!” The crowd, a sea of raised middle fingers during the explosive coda, screams in unison this American heresy. Something is changing.

As Tea Party canonization brightens the aura around the late president for the right, Killer Mike’s “Reagan” reveals a contrapuntal, inverse reaction on the left and among many youth. In the age of Occupy and the Tea Party, diverging attitudes toward Reagan represent a widening gulf between political poles, between generations, between holders of privilege and those without. The anger of those left behind during the Reagan era is perhaps now an anger shared by younger Americans whose futures feel sacrificed to the prerogatives of those with their hands on the levers of power, whether in legislative houses or boardrooms.

The sea change may not be apparent to some observers of Washington politics. While Reagan’s legacy suffers rot and corrosion among black Americans and an increasing number of white youth, he remains unchallengeable in Washington. Even President Obama, the socialist bogeyman to conservatives, cites Reagan to justify policy propositions and endear himself to conservative audiences. Obama acknowledges that Reagan altered the course of history in a way that no one since Lyndon Johnson has matched. Some critics contend that the change promised with the election of Obama has done little to sway the general direction charted by Reagan.

Ultimately, as anti-Reaganism solidifies and spreads, the argument is not only about whether cocaine was allowed to be dumped into black neighborhoods; it is about who gets sacrificed in the service of power. To some degree, and we’ll likely never know the extent, black Americans were seen as expendable in the mad dash to illegally fund pro-capitalist guerrillas in Central America. The documented arm sales to Iran to fund the Contras made expendable an unknown number of Iraqis during the two nations’ bloody eight-year war. Reagan is not, in hip-hop parlance, merely a “dead president,” but a national metonym for power, privilege and a particularly brutal means of its defense. “They only love the rich, and how they loathe the poor,” raps Killer Mike in “Reagan,” a song that ultimately aligns a global myriad of the relatively powerless against the elite, symbolized by Reagan.