The meme-ification of Ayn Rand: How the grumpy author became an Internet superstar

"Feminist" T-shirts are her latest viral sensation. Why the objectivist's writings lend themselves to the Web 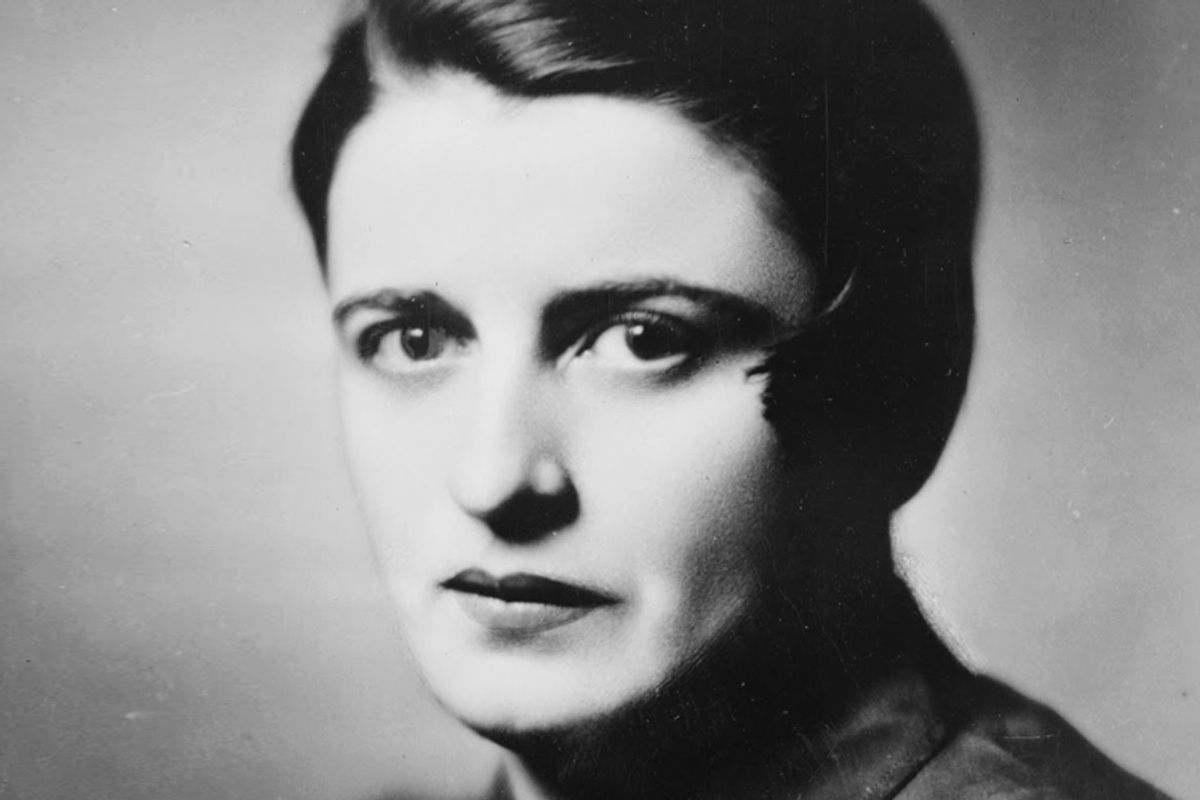 Ayn Rand is not a feminist icon, but it speaks volumes about the Internet that some are implicitly characterizing her that way, so much so that she’s even become a ubiquitous force on the meme circuit.

Last week, Maureen O’Connor of The Cut wrote a piece about a popular shirt called the Unstoppable Muscle Tee, which features the quote: “The question isn’t who is going to let me, it’s who is going to stop me.”

As The Quote Investigator determined, this was actually a distortion of a well-known passage from one of Rand’s better-known novels, The Fountainhead:

“Do you mean to tell me that you’re thinking seriously of building that way, when and if you are an architect?”

“My dear fellow, who will let you?”

“That’s not the point. The point is, who will stop me?”

Ironically, Rand not only isn’t responsible for this trendy girl power mantra, but was actually an avowed enemy of feminism. As The Atlas Society explains in their article about feminism in the philosophy of Objectivism (Rand’s main ideological legacy), Randians may have supported certain political and social freedoms for women—the right to have an abortion, the ability to rise to the head of business based on individual merit—but they subscribed fiercely to cultural gender biases. Referring to herself as a “male chauvinist,” Rand argued that sexually healthy women should feel a sense of “hero worship” for the men in their life, expressed disgust at the idea that any woman would want to be president, and deplored progressive identity-based activist movements as inherently collectivist in nature.

How did Rand get so big on the Internet, which has become a popular place for progressive memory? A Pew Research study from 2005 discovered that: “the percentage of both men and women who go online increases with the amount of household income,” and while both genders are equally likely to engage in heavy Internet use, white men statistically outnumber white women. This is important because Rand, despite iconoclastic eschewing ideological labels herself, is especially popular among libertarians, who are attracted to her pro-business, anti-government, and avowedly individualistic ideology. Self-identified libertarians and libertarian-minded conservatives, in turn, were found by a Pew Research study from 2011 to be disproportionately white, male, and affluent. Indeed, the sub-sect of the conservative movement that Pew determined was most likely to identify with the libertarian label were so-called “Business Conservatives,” who are “the only group in which a majority (67 percent) believes the economic system is fair to most Americans rather than unfairly tilted in favor of the powerful.” They are also very favorably inclined toward the potential presidential candidacy of Rep. Paul Ryan (79 percent), who is well-known within the Beltway as an admirer of Rand’s work (once telling The Weekly Standard that “I give out Atlas Shrugged [by Ayn Rand] as Christmas presents, and I make all my interns read it.”).

Rand’s fans, in other words, are one of the most visible forces on the Internet, and ideally situated to distribute her ideology. Rand’s online popularity is the result of this fortuitous intersection of power and interests among frequent Internet users. If one date can be established as the turning point for the flourishing of Internet libertarianism, it would most likely be May 16, 2007, when footage of former Rep. Ron Paul’s sharp non-interventionist rebuttal to Rudy Giuliani in that night’s Republican presidential debate became a viral hit. Ron Paul’s place in the ideological/cultural milieu that encompasses Randism is undeniable, as evidenced by exposes on their joint influence on college campuses and Paul’s upcoming cameo in the movie Atlas Shrugged: Part 3. During his 2008 and 2012 presidential campaigns, Paul attracted considerable attention for his remarkable ability to raise money through the Internet, and to this day he continues to root his cause in cyberspace through a titular online political opinion channel—while his son, Sen. Rand Paul, has made no secret of his hope to tap into his father’s base for his own likely presidential campaign in 2016. Even though the Pauls don’t share Rand’s views on many issues, the self-identified libertarians that infused energy and cash into their national campaigns are part of the same Internet phenomenon as the growth of Randism.

As the Unstoppable Muscle Tee hiccup makes clear, however, Rand’s Internet fashionability isn’t always tied to libertarianism or Objectivism (the name she gave her own ideology). It also has a great deal to do with the psychology of meme culture. In the words of Annalee Newitz, a writer who frequently comments on the cultural effects of science and technology:

To share a story is in part to take ownership of it, especially because you are often able to comment on a story that you are sharing on social media. If you can share a piece of information that’s an absolute truth—whether that’s how to uninstall apps on your phone, or what the NSA is really doing—you too become a truth teller. And that feels good. Just as good as it does to be the person who has the cutest cat picture on the Internet.

If there is one quality in Rand’s writing that was evident even to her early critics, it was the tone of absolute certainty that dripped from her prose, which manifests itself in the quotes appearing in memes such as “I swear by my life and my love of it that I will never live for the sake of another man, nor ask another man to live for mine,” or  “A creative man is motivated by the desire to achieve, not by the desire to beat others” and “The ladder of success is best climbed by stepping on the rungs of opportunity.” Another Rand meme revolves around the popular quote: “Individual rights are not subject to a public vote; a majority has no right to vote away the rights of a minority; the political function of rights is precisely to protect minorities from oppression by majorities (and the smallest minority on Earth is the individual).”

What’s particularly noteworthy about these observations, aside from their definitiveness, is the fact that virtually no one adhering to a mainstream Western political ideology would disagree with them. Could you conceive of anyone on the left, right, or middle arguing that they’d accept being forced to live for another’s sake or want another to live solely for their own? Or that their ambitions are not driven by a desire to beat others? Or that they don’t think success comes from seizing on opportunities? Or that they think majorities should be able to vote away the rights of minorities?

These statements are platitudes, compellingly worded rhetorical catch-alls with inspiring messages that are unlikely to be contested when taken solely at face value. Like the erroneously attributed “The question isn’t who is going to let me, it’s who is going to stop me,” they can mean whatever the user wishes for them to mean. Conservatives can and will be found who claim that only they adhere to those values while liberals do not, many liberals will say the same thing about conservatives, and, of course, Rand wrote each of these statements with her own distinctly Objectivist contexts in mind. Because each one contains a generally accepted “absolute truth” (at least insofar as the strict text itself is concerned), they are perfect fodder for those who spread memes through pictures, GIFs, and online merchandise—people who wish to be “truth tellers.”

Future historians may marvel at the perfect storm of cultural conditions that allowed this Rand boom to take place. After all, there is nothing about the rise of Internet libertarianism that automatically guarantees the rise of meming as a trend, or vice versa. In retrospect, however, the fact that both libertarianism and meming are distinct products of the Internet age—one for demographic reasons, the other for psychological ones—made the explosion of Randisms virtually inevitable. Even if they’re destined to be used by movements with which she’d want no part, Ayn Rand isn’t going to fade away from cyberspace anytime soon.