NBC's frankenshow: "State of Affairs" borrows heavily from every other show on TV 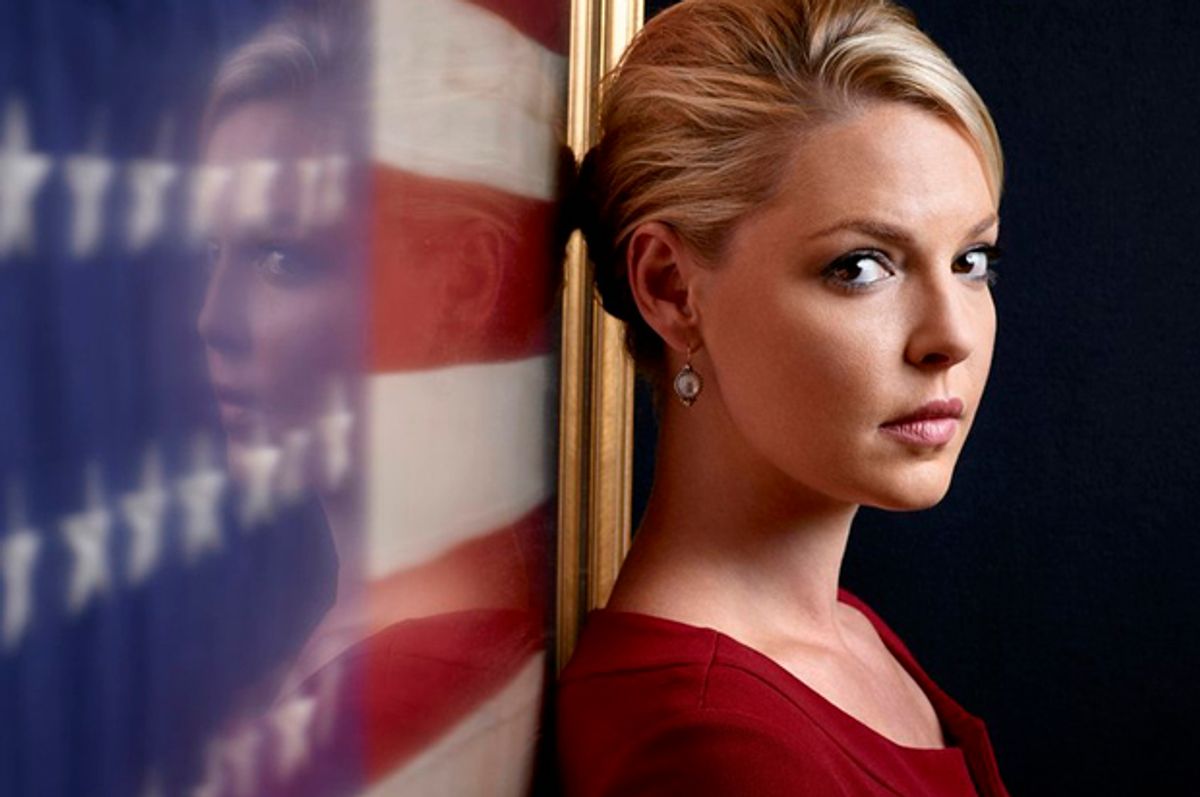 It’s hard to fully express what a mess NBC’s new drama “State of Affairs” is. The show has its charms, but lacks a sense of purpose. Lead Katherine Heigl plays Charleston Tucker — a name that Pilot Viruet at Flavorwire observed “suggests a fancy racing horse wearing a monocle" — a lead CIA analyst with a bunch of problems who we’re told is worth putting up with anyway. In the pilot, which aired last night, Charleston engages in anonymous sex, drinks a whole bunch, sleeps not at all, gets nearly fired from the CIA, breaks into the Oval Office and walks out of therapy. What a loose cannon! Let’s make a show about that spitfire!

The producers are so eager to make “State of Affairs” a hit that they’ve manufactured a drama that looks and sounds like other hit dramas. It’s a frankenshow — with big chunks directly from the “Homeland” playbook, vital organs from “Scandal,” some of the jingoism of “24,” and the slick pacing of “The West Wing.” But the monster lacks a beating heart, and as a result is just a lot of disjointed pieces that exist side by side without interacting with each other meaningfully. This is apparent not just in different story lines from the show but even in different lines of dialogue in the same scene: Charleston’s therapy session in the cold open is a heady cocktail of PTSD, exposition and pretending to be chill with casual sex. “Don’t get all judgy, Doc,” Charleston says breezily, on the year anniversary of her fiancé’s murder in a terrorist attack, right after a literal flashback. “I like to have a good time.” When her therapist asks what good can come of being so sexually “irresponsible,” Charleston responds with a pat bon mot that serves as both exposition, character development and the general attitude of this show: “Good doesn’t have to come. I do. And I’m not going to apologize for that.”

So, in the spirit of non-apology, the following is a thorough inventory of where “State of Affairs” begged, borrowed or stole its many parts from, walking through each act of the show.

Cold Open
Welcome to Shaky-Cam Land. “State of Affairs” films the opening scene — a battle scene — head-on, from Charleston’s point of view, which could be interesting — but then makes the questionable stylistic choice of including her hands and legs when the camera pans down or to the side. The viewer is made to feel as if they are a Barbie stumbling around Afghanistan, or alternatively, in one of those Disney Channel commercials where you raise your hands and realize you’re Mickey Mouse.

This move is less reminiscent of television and more of first-person shooter video games — and actually, once you start to think of “State of Affairs” as a very slow game of “Call of Duty,” it all kind of begins to make more sense. The chyrons establishing when and where everything is happening are green neon on black; the title card offers slim red lines redacting big black block letters of text. Even the words on the screen aren’t in the same show.

Anyway, in this “Call of Duty” cut-scene, Charleston has a flashback to the day her fiancé Aaron was killed during an attack on her convoy. She is having this flashback at her therapist’s office. Her therapist is like, how do you feel? And Charleston is like, everything sucks, but I look really cool all the time! (Wardrobe update: Charleston is wearing a royal blue sheath dress with an interesting, somewhat geometric neckline. To therapy. And then lies down on the couch, while wearing her not-so-sensible black spike heels.)

Therapy is a common enough narrative framing device for a lot of film and television shows — especially film and television about white people, and especially in the aftermath of “Homeland,” even though “Homeland” totally didn’t have therapist scenes. “The Sopranos” is the gold standard for therapy on TV and “In Treatment” made a whole narrative of it, but “Homeland” was the show that brought forward the idea of a mentally ill woman having a successful professional life. Charleston Tucker’s PTSD is not the same as Carrie Mathison’s bipolar disorder, but the way their traumas manifest are very similar: sexual recklessness, heavy drinking, intense devotion to their jobs at the CIA, a demonstrated interest in leather jackets. Of course, the whole point of “Homeland” is that Carrie’s disorder often leads her to brilliant but reckless conclusions. The whole point of the sex and liquor in “State of Affairs” appears to be so that Katherine Heigl can look sort of edgy.

Similarities between the cold open and “Homeland”:
white wine
blond women being messy, sleepless wrecks who then go to work for the CIA
anonymous sex
some kind of nod to a mental illness
Kabul

The most original thing “State of Affairs” has done so far:
dressing Katherine Heigl in blue leather. Seriously! A blue leather jacket! Someone is having a vision over there.

Act One
Charleston Tucker arrives at work (at 2 a.m.), and the show shifts from “Homeland” to Shonda Rhimes by way of Sorkin — workplace dramedy banter, with an assorted cast of very difficult to differentiate co-workers who all live and die on the job. They make jokes! They sort of flirt! An electric guitar riff plays in the background! And the camera movement around the little cluster of desks suggests a warm, sustaining conviviality that gets them through the tough moments of this dark, stressful job!

By minute 15 of the episode, everyone in the room has had to demean themselves slightly by saying the name “Charleston” out loud, casually, as if it is not a big deal.

Charleston’s right-hand woman is so closely modeled on “Scandal’s" redhead Abby that I’m just going to call Sheila Vane’s character Brunette Abby, even though she has a name (the name is Mo). Mo calls Charleston “Charlie.” Mo manages to toss in the phrase “as your friend.” Mo is Abby but brunette. “State of Affairs” is eager to make it clear to you, the viewer, that “Charlie” is well-liked and respected by her co-workers. Charleston Tucker jokes. She laughs! She makes expressions toward other characters, on-camera. It’s hard to appreciate the instant workplace chemistry of both Sorkin’s and Rhimes’ shows until you see it not working right in front of you. Charleston’s drawled “Aaaaple polisher” is just one of the least convincing teasing phrases tossed into this scene. (Context clues indicate that she was making fun of the new hire for trying too hard at his job. Further context clues indicate that said hire does not think this joke is funny.)

Similarities between Act One and “The West Wing”:
power play over breakfast — DC, man
copious use of the word “POTUS”
Surprising accuracy of details: The doctor is kidnapped in Kenya and smuggled to neighboring Somalia; Charleston Tucker can understand what they’re saying, because the official language of Somalia is Arabic, and it’s actually slightly plausible that she would know Arabic (as opposed to Pashtun or Urdu or Farsi); everyone in the CIA who has to brief the president eats a sad little breakfast at work, sometimes covered in foil.

Similarities between Act One and “The X-Files”:
The CIA director is named Skinner, just like Mulder and Scully’s boss!
government bureaucracy chic

Up until now:
This show made sense.

Act Two
Charleston Tucker feels keenly that people should not be beheaded, and will tell the president as such. And with that, let’s go into a montage, people. By that I mean, let’s rip things in half and type and talk to ourselves at our desks and circle things in red ink and then put them in official-looking burn bags.

Montages are a classic, easy way to create excitement and tension, and “State of Affairs”’ montage is a good one. Which falls a little flat because then Charleston changes her outfit. Into a leather blazer (?!) and an eggshell-and-black dress that she literally must have stolen from Olivia Pope’s closet. And then she goes to meet the president, played by Alfre Woodard, who is essentially the closest thing to outright stealing either Olivia Pope or Annalise Keating out of a Shonda Rhimes production. Alfre Woodard deserves all the work she can get, but her casting feels like the worst kind of disingenuousness.

Similarities between Act Two and “Pretty Little Liars”:
The woman who briefs the president of the United States of America texts anons on her phone, who claim to know what she did in Kabul and call her blazer “punk chic” (what? who? what?).

Similarities between Act Two and “Hackers”:
Charleston Tucker’s phone makes super-annoying noises that sound like what people thought computers were like in 1995.

Similarities between Act Two and “Cruel Intentions”:
Charleston’s dress is white with a black streak that you only see when she sits down with the president. Could it be symbolism? A dark or secret side to Charleston?? Surely Charleston would not have secrets to hide???

Act Three
The following drama mostly takes place via people yelling at each other on the phone, about phones.

Similarities between Act Three and “Archer”:
Charleston Tucker is saved from being arrested by a plot device. As she turns away to thank said plot device, she says, “That was literally perfect timing,” indicating a strong grasp of the definition of “literally” that “Archer” has also instilled in us.

Similarities between Act Three and “Runaway Bride”:
Charleston Tucker escapes pursuit by jumping onto a truck while very well-dressed.

Similarities between Act Three and literally no one in D.C. ever:
Charleston Tucker hops off the truck and into a cab, saying “1600 Pennsylvania Avenue,” because obviously, cab drivers in D.C. do not know where the White House is until they get an exact address.

Similarities between Act Three and a ridiculous spy caper from the ‘60s:
An enemy agent literally hides a phone in his fedora. Then he is arrested and taken far, far away.

Act Four
Emotional resolution … yielding to further intrigue, as the captured doctor is freed but we discover Charleston Tucker is not as innocent as we thought.

Similarities between Act Four and “Homeland”:
egregious use of jazz

Similarities between Act Four and “Scandal”:
Charleston Tucker wears an Olivia Pope coat to the memorial. (Guess what? Underneath her white coat, her dress is black.)

Similarities between Act Four and Lady Gaga’s “Telephone” video featuring Beyoncé:
The following exchange: “I am going to end every single one of their lives.” / “That’s my girl. His death will make killers out of both of us.”

Similarities between Act Four and a Prohibition-era speakeasy:
Someone says to the appropriately named Charleston Tucker, “Hey, doll, can I buy you a drink?”

Similarities between the last line of “State of Affairs” and hopefully no one else’s first dates, ever, in the history of the universe:
“Hey, you wanna see a trick my dad taught me?”