Ursula K. Le Guin: Amazon has too much control over what books get published

The author of "The Wizard of Earthsea" talks genre, gender and lessons from 50 years of writing science fiction 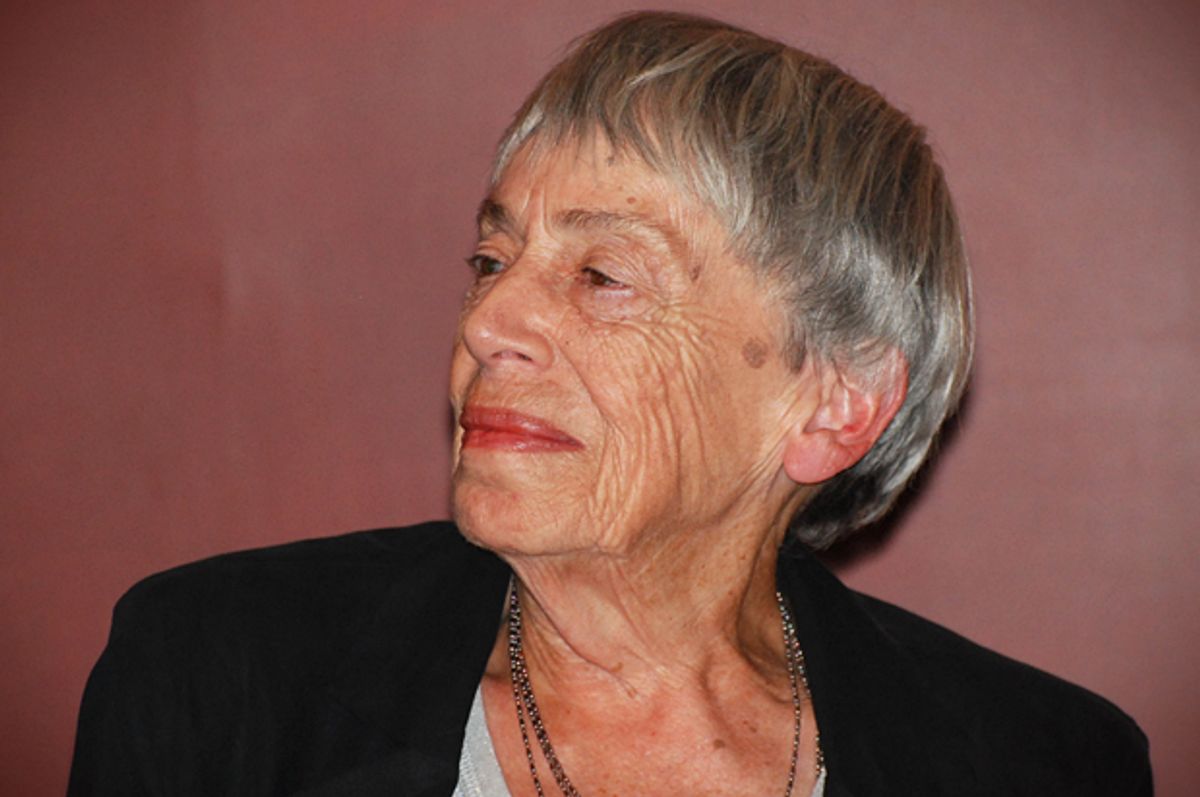 On Nov. 19, at the annual National Book Awards gala, Neil Gaiman will present the Medal for Distinguished Contribution to American Letters to Ursula K. Le Guin. At 85, Le Guin could be resting on her well-earned laurels, but she continues to write, mostly short stories, and to explore new fictional terrain, particularly in Earthsea, the imaginary archipelago where some of her most memorable fiction is set. Writers as diverse as Gaiman, Zadie Smith and David Mitchell have cited Le Guin as an influence, and Harold Bloom included her novel "The Left Hand of Darkness" in "The Western Canon." This is one of those rare occasions when "national treasure" doesn't seem like an overstatement.

Not bad for a writer who, wearied by rejections, started sending stories to science-fiction magazines because she thought she might have a better shot there. Although most of Le Guin's work fits within the science fiction and fantasy tent, she has also written poetry and realist and historical fiction; her most recent novel, "Lavinia," published in 2008, is set during the founding of ancient Rome.

The signal trait of all of Le Guin's writing is a drive to break out of the customary frameworks by which we understand ourselves and our lives. As the daughter of the prominent anthropologists Alfred and Theodora Kroeber, she grew up surrounded by people raised in indigenous cultures and acquired a much broader sense than most children of the possible ways a society and its stories might work. She's still testing limits and asking questions, and in light of the forthcoming celebration of her 50-year career, she agreed to an email interview with Salon.

The first question I have is about genre, since you’ve written in so many. "Lavinia" is historical fiction and made me think you could easily have had a whole alternate career writing books like those of, oh, Mary Renault. There are some strong similarities between science fiction and historical fiction, but you also write fantasy, poetry, etc. How do you decide which genre to write in — is that part of the plan from the beginning (“I feel like writing a fantasy novel next”) or does it emerge in some other way?

Ah, genre. A word only a Frenchman could love. Well, you ask how I decide which genre to write in, and I have to answer, mostly I don't. My mind doesn't work that way.

Way back, around 1960, I did make a conscious decision to see if I could write for the science fiction magazines, because editors in other fields kept telling me they didn't understand my stories, and I thought maybe sf editors might. I got my first two acceptances in one week. One story sold to a science fiction magazine, and another, not aimed at any market, was accepted by a small literary magazine.  The fact that the sf magazine paid encouraged me to go on learning how to write fantasy and sf. Thirty bucks was welcome back then.

I didn't follow the sf rules and conventions unless I felt like it; essentially I went on writing what I wanted to write, and they could call it what they liked. To publish genre fiction of course branded me as a sub-literary writer in the eyes of the literary establishment, critics, award-givers, etc., but the great potentialities of the field itself, the open-mindedness of its editors and critics, the intelligence of its readers, compensated for that. Genre fiction was looked at as a ghetto, but I wonder now if realist fiction, sealing itself off in the glum suburbs of a dysfunctional society, denying the uses of imagination, was the ghetto.

A degree of recognition, a fearless agent, several loyal editors, and fiscal solvency allowed me to go on writing what I felt like writing, overstepping boundaries. Sometimes I knew I was risking real non-comprehension, as with [her 1985 novel] "Always Coming Home." And not fitting nicely into a category, and not repeating what you did last time, makes the sales people hate you. But there was always enough appreciation to keep my courage up.

"Lavinia" is so far from anything else I ever wrote (and not a whole lot like anything I ever read) that, given these hard times in publishing, I felt sort of guilty at submitting it. But on the other hand, I knew it's as good as anything I ever wrote, and went a little farther than I'd gone before. And I'm happy about that, since it looks as if it'll be my last novel.

Don’t say "Lavinia" is your last novel! I love that book, and have been eagerly waiting for the next. I know I'm not alone in saying that your books have flipped my thinking at various key moments in my life."A Wizard of Earthsea" when I was 13 gave me the first inkling that the fantasy adventures I loved to read throughout my childhood could do something more interesting than good vs. evil. In college, "The Left Hand of Darkness" showed me how reflexively gendered my view of the world is. "The Dispossessed" helped me better understand all the alternative groups I was a part of in my 20s and 30s, and then "Lavinia," when I thought my views were pretty settled, really let me see the beauty in a way of life that is completely different from my own.

All of that is pretty personal, but I imagine you get a lot of that. Is there a particular work of yours that you feel has connected with audiences more than the others, and if so, why do you think that is?

Thanks for the kind words!  I'm very fond of Lavinia. She came and started talking to me.  And then Vergil got in on the act. I was kind of floored, but I went along with it. The whole book was a gift. It was mysterious.

And yes, when are we going to get away from that War of Good and Evil crap in fantasy?!

You know, I don't think a lot about why one book connects with its readers and another doesn't.  Probably because I don't want to start thinking, "Am I popular?" I spent way too much time thinking about that in high school. Bleh! Pure waste of time.

I do wonder why a book I think is just as good as a more popular one isn't as popular. Sometimes it's just luck. Good or poor P.R. What the book's about. How old it is: Books people read as kids, when they're young, tend to stick better in their heads. People always want to talk about something I wrote and they read decades ago, and I want to talk about the newer ones (a penalty for living so long).

My first hit, and it's stayed the course, was "The Left Hand of Darkness." It asked, "What is gender?" just when that question began to be a very hot one. The book was a first of its kind, and came at the right time. And by leaving the question open, the way science fiction can do, it invites later generations to read it in their own way, bring their own views to it.  We have a lot more vocabulary about gender now than we did in 1969, but we still need to talk.

I often think that with books like yours, the ones that are designed to really change the way people think, it makes a big difference if they read it at a pivotal moment in their lives, or some other time of maximum absorbency. Kids are like that all the time, so the books we read in childhood seem to stick more.

This reminds me of something else I wanted to ask you about, which is about treating social issues in fiction. It’s interesting that at first you were drawn to writing science fiction for largely practical reasons, given that growing up among anthropologists seems like the ideal background for someone who’s going to go on to write about how societies could or should be different from what they are. To my mind, your work is always saying to the reader, “Look, things don’t have to be the way you think they do or the way they’ve always been,” and that’s tied up with talking about how they could be better. But people tend not to like fiction they experience as “didactic.” Do you have any strategies or rules of thumb you use to keep your fiction from going there?

I've always been interested, the way anthropologists are, in the different things people do and the different ways they do them, which led me, as a fiction writer, into thinking about different ways they could do them, and inventing different societies and cultures. I was inventing -- not in a didactic, prescriptive way, but descriptively, in the thought-experiment mode. What would it be like if we did it differently? What would an ungendered society, or an anarchist society, actually be like to live in? How would it work? What kind of problems would it run into?

You can make that kind of thinking prescriptive and didactic -- so you get the classic utopia -- or color it all black, so you get the 10,000 dystopias we're getting at the moment. But why do either?  I'd rather let the experiment run and see what happens.

I did that in both my so-called utopias, "The Dispossessed" and "Always Coming Home." Of course the outcome, as in a lot of experiments and observations, isn't clear and neat -- it's complicated and uncertain. So some people hate it. More people like being preached at, maybe, than you think? But I don't want to preach. I want to explore.

I think you’re right that people are happy to be preached at as long as they agree with you. They don’t even see it as preaching then. It’s only when they disagree that they think you’re being didactic.

My last question has to do with publishing. You’ve been outspoken on both the Google Books settlement and, more recently, on Amazon. And you’re a founder of Book View Cafe, an alternative publishing operation, but you also still publish with small and large presses. I’d love to hear your thoughts on what today’s authors need to know or understand about publishing.

Book View Cafe is a professional authors' co-operative, relying on member volunteer work. It fills a largely blank place in the publishing field. I do publish when I can with small presses that continue to regard and sell books as books, not as products indistinguishable from other commodities. I think corporate ownership and management of the big commercial publishers has grown steadily more misguided, to the point of allowing commodity marketers such as Amazon control over what they publish, which means what writers write and what people read. Dictatorship/censorship by the market or by government is equally dangerous, and crippling to any art.

There's still a whole range of options for professional writers -- between the poet who has no "market" at all, yet writes and publishes for love of the art, through the ordinary novelist who tries to balance artistic standards and conscience with demands for easy salability, to writers eager to sell themselves and their product to the highest bidder. E-publication has changed the rules, and made self-publication temptingly easy. It's not easy to know how to be an author these days! I'm way too old to give any advice on the matter to anyone. All I can do is keep on going as I always did, in the direction that seems to promise the most freedom.