The year of the rear: A thorough history of 2014 in butts

From "Anaconda" to Kim Kardashian, a look back at the posteriors that got us to where we are today 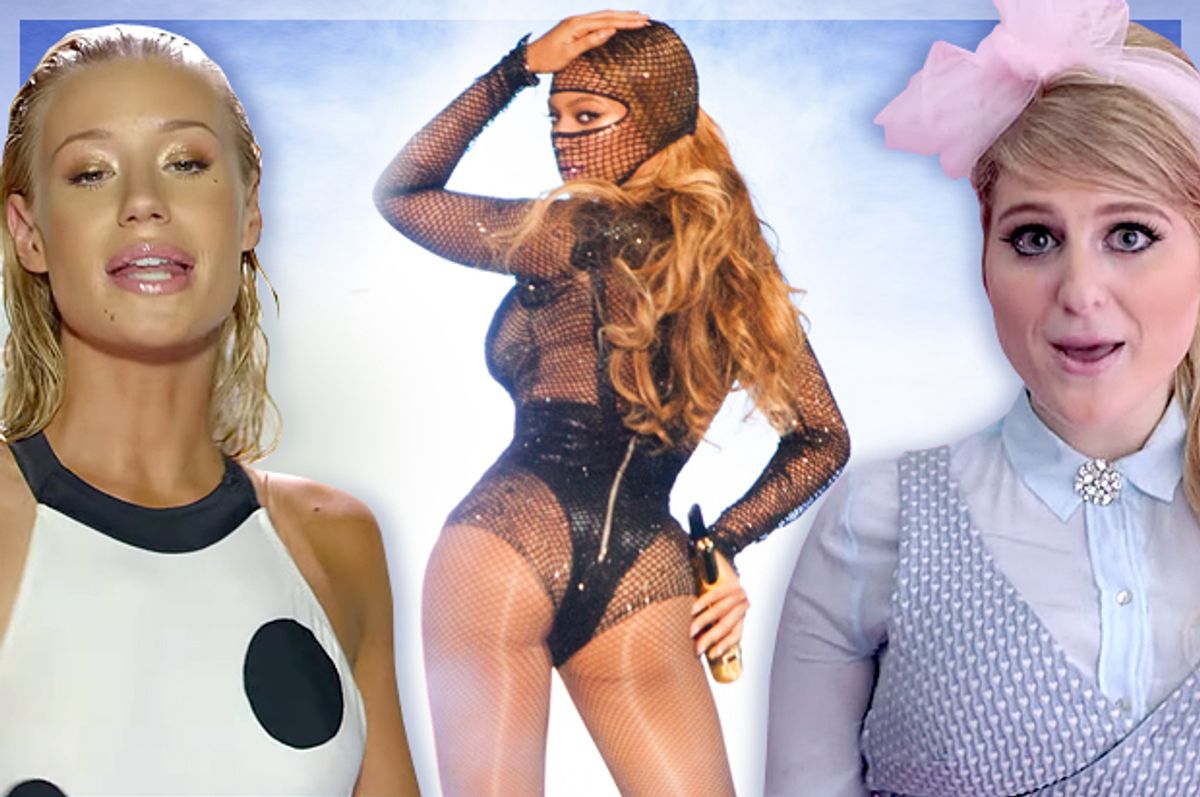 It was tough to imagine that any year could surpass 2013 -- the year that gave us Rihanna's denim thong and Miley twerking at the VMAs -- when it came to butts. Alas, then 2014 happened and the bar was raised once again. From Beyoncé to Jen Selter, “Booty” to “Anaconda,” 2014 was a landmark year for the rear end in popular culture. In honor of Kim K's recent breaking-of-the-Internet, we look back on the year in posteriors that led us to where we are today.

Jan. 2: The New York Post publishes a story about fitness guru and Instagram “belfie” star Jen Selter, whose butt selfies had, at that point, garnered her an Instagram following of 1.3 million (she now has 4.9 million). Selter would go on to write a series of columns for the Post and be written about everywhere from Vanity Fair to the New York Times. It’s safe to say, if 2014 is the year of the butt, it is also the year of Jen Selter's butt. Jan. 6: Foreshadowing her imminent breaking of the Internet, Kim K. posts this butt selfie along with friend Blac Chyna. Some claim it is photoshopped. Many, many people "like" it anyway. Feb. 14: For its 50th anniversary swimsuit issue, Sports Illustrated abandons its standard boob shots and decides that, for 2014, it's going to put ass front and center. Nina Agdal, Lily Aldridge and Chrissy Teigen do the honors. Feb. 26: A new survey reveals that butt implants are a growth area for plastic surgeons in the U.S.

March 28: A Pinterest hack fills users' boards up with photos of ladies’ butts. People are not that bothered by it (because it is hilarious).

May 27: After Kate Middleton’s skirt is blown up by a helicopter, marking the princess' one-millionth recorded wardrobe malfunction, a German tabloid runs some very un-regal photos of her exposed booty.

May 30: Jason Derulo releases his magnum opus, "Wiggle," ft. Snoop Dogg, wherein attempts to solve the age-old question “How do you fit all them in that jeans?”

June 2: And so commences the summer of the ass-centric anthem. The first contender: Meghan Trainor’s body-positive, booty-positive, soon to be No. 1 pop hit “All About That Bass," in which Trainor declares, “I'm bringing booty back. Go ahead and tell them skinny bitches that.” (To which we say: Meghan, honey, it’s already been brought’n.)

June 3: Rihanna showed up to the CFDAs to receive her "style icon" award, flashing both boobs and butt in a completely see-through gown. Then she twerked in it, because what else does one do when wearing a sheer dress covered in 216,000 Swarovski crystals? June 16: After losing 3-1 to Brazil, the Croatian national soccer team commiserated by going back to their hotel and having a naked pool party, which was captured by photographers hiding in bushes. Hey, nothing soothes a national failure like the feel of cool chlorinated water against your butt cheeks.

June 26: Beyoncé and Jay Z kick off their "On the Run" tour, featuring a series of innovative dress-changes — including most notably, Bey’s assless bodysuit.

July 17: “Dating Naked” debuts and while it doesn’t totally live up to its name, there's still a lot of skin on display (Read: pixelation in the front, party in the back). As the Daily Beast writes: “You do see butts. You see guy butts. You see girl butts. You see so many butts.”

July 24: Nicki shares a bootylicious teaser for her forthcoming track "Anaconda," which promptly gets the Photoshop treatment in a million wonderful ways. Aug. 18: Taylor Swift releases the video for “Shake It Off,” the first song off 1989, which is not as butt-centric as most of the summer's songs but still involves a good amount of shaking, both metaphoric and literal. One of the segments from the video — which shows Swift dancing in front of and then crawling between the legs of a group of twerking, black backup dancers — leads people to accuse Swift of appropriating black culture.

Aug. 19: Nicki Minaj’s “Anaconda” video arrives, featuring Nicki’s world-historical-ass twerking in a variety of locations, from a jungle to an exercise class to Drake's lap, and promptly setting the Vevo record for most views in 24 hours. It does not break the Internet, but it's a good start.

Aug. 24 The VMAs happen, and as usual, they feature a veritable cornucopia of butts (and Miley wasn't even performing). As BuzzFeed puts it, “The 2014 VMAs Were Officially Sponsored By Butts.”

Sept. 10: Vogue magazine declares “we’re officially in the era of the big booty.” To which the world rolls its eyes and says: Uh, yeah — we know.

Sept. 17: Following hot on the heels of Vogue, the New York Times also discovers that people like big butts. Ditto above, but worse.

Sept. 18: The booty music video wars heat up: As a seeming rejoinder to "Anaconda," OG butt queen J.Lo releases the video for her song, literally called “Booty,” which features her and Iggy Azalea slathered in oil and grinding up on one another, as well as a whole lot of twerking and ass-slapping. As Iggy says: “They're begging me to drop down on 'em / But right now Iggy on the top / The last time the world seen a booty this good / It was on Jenny from the block.”

Oct. 3: Affleck’s peen was the biggest star of fall blockbuster "Gone Girl," but let’s not forget that his butt also made a cameo.

Nov. 11: The AP writes about the booty business boom, claiming “gym classes that promise a plump posterior are in high demand,” as are waist-shapers and padded panties. Empirical proof of the reign of the butt continues to mount.

Nov. 12: A day that will live in infamy: Kim Kardashian’s ass breaks the Internet.