Glenn Beck's Santa nightmare: Why his new Kris Kringle story will horrify you

Beck's new project, "The Immortal," depicts Santa Claus like your kids have never seen before. And it gets worse 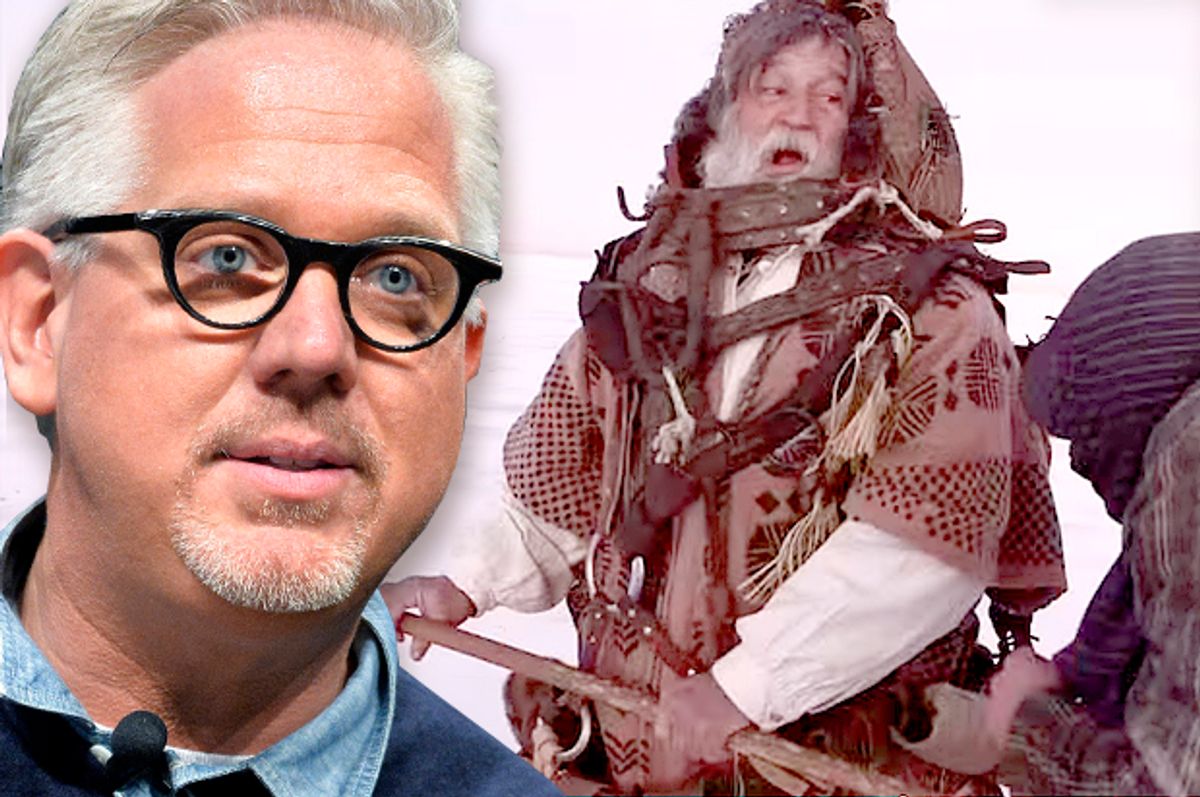 After Glenn Beck's recent announcement that he's being treated by a "chiropractic neurologist" for a variety of physical and mental symptoms (including hallucinations), the man is back with a vengeance and he's going to be releasing new material over the next couple of years that's bound to knock your (Christmas) stockings off.

You may or may not have heard that Beck has a book and movie empire. It's called the American Dream Labs and they're devoted to faith-based stories for the whole family. They currently have two projects in development. One is called "The Revolutionary" and it seems to be shrouded in secrecy. Knowing Beck's love of thrillers it's possible that's a sequel to his blockbuster bestseller "The Overton Window." We can only hope that it will feature the exciting action and scintillating dialogue like "I've got some rules, too, and rule number one is, don't tease the panther" from that earlier masterpiece. On the other hand, it's always possible that he's rewriting the story of George Washington revealing for the first time that he was actually the direct descendant of Jesus Christ and Cleopatra. We'll just have to wait and see.

The other project is called "The Immortal" and Beck has been giving out some tantalizing clues about it in recent days. He says he was inspired by the fact that kids love Santa Claus and he doesn't want to burst their bubble but basically the jolly old elf is nothing but a scam artist who is ruining the real meaning of Christmas. So he wrote a new story about Kris Kringle -- as an action hero who serves as a sort of ninja bodyguard for a young Jesus Christ. Seriously. Here is what he said on his show earlier this week:

My Santa, the Immortal is a very different guy. He starts out right before the birth of Christ, and he is up in the mountains. And he is a warrior. He has lost his wife, and he’s a sad individual. And he’s got a son who loves dearly, and he lives up in the mountains, and he hunts for food.

But what’s interesting about him is he’s also good with his hands, and the way he hunts is completely different. He actually goes up in the mountains, and he makes these giant puppets that he actually gets inside. And he is trying to kill these wild boars by being inside one of these puppets, if you will, of a boar. And he roots around as the boars come in. That way he’s close enough to kill them.

And he takes his son and leaves him in his sledge up on the mountaintop and tells him to be careful. You know, he has taught him to be smart and wise, but as Agios, the main character, comes down, and he is hunting for these wild boar, he hears a scream up by the sledge, and the wolves have come and dragged his boy away.

And what ensues is a violent, bloody encounter with the wolves as Santa Claus stabs and slashes the animal in retribution for what they've done to his son. Let's just say that no visions of sugar plums will be dancing in your kid's head after Daddy reads this story on the night before Christmas. In fact, he'll never sleep again.

Beck has done a little trailer for the story, which, as you might imagine, looks like it's going to be just a little bit different than "It's a Wonderful Life":

Yeah, I don't know what that's all about either. But it sure makes Christmas look scary.

That’s Santa? Yes, because what does a man do when he’s in that position where he has no hope, no resurrection, nothing? What does he do? He goes on an amazing journey as a hunter, as a gatherer. He eventually is hired by three wise men because he can negotiate, because nobody is going to rip them off, and he knows how to get the very best gifts. And so he negotiates with gold, frankincense, and myrrh and then has to go protect that gold, frankincense, and myrrh and then through a series of events is left there to protect the Christ child, never interacting, just watching.

He doesn’t know who he is, and he goes darker and darker in his whole life as he watches this boy grow, but he’s always touched by him, but he doesn’t realize it until the Sermon on the Mount. As this now 75-year-old man who has spent 30 years just following this little boy, as he’s listening to the Sermon on the Mount, he finally breaks. He knows who he is, and he falls to his knees, and he says Lord, let me serve him. Let me protect him. Let me point the way towards him until his mission is finished.

He then somehow becomes immortal and feels guilty because he can't stop the crucifixion and wanders through time depressed and anxious. And that's all we know. Beck leaves us with the knowledge that somehow a thousand years later Santa/Agios meets a kid and the kid grows up to be St. Nicholas. I can't wait to find out how the macho, immortal superhero turned that kid into a dancing, singing, cookie-munching, red-fur-wearing wimp. What a story!

Far be it from me to suggest that changing the story of Jesus Christ to include Santa Claus might be just a tad presumptuous.  After all, believers in the Bible don't think it's sacred or anything. But you do have to wonder what the more traditional believers will think about Beck's supernatural hero being injected into the central story of Christianity.  (Dan Brown may have done this with the "DaVinci Code" but he makes no claim to writing  "faith-based" literature -- and the faith-based crowd wasn't happy with him at all.)  It's one thing to play around with the tale of a mere saint, it's quite another to usurp the role of God himself in the Christ story.

I don't know if this story came to Beck before he found the cure for his hallucinations at the chiropractic neurology clinic. But if it didn't, then I'd sure like to know what's in that vitamin regimen he's taking. It must be more potent than peyote.