Should medical professionals be involved in force-feeding prisoners? 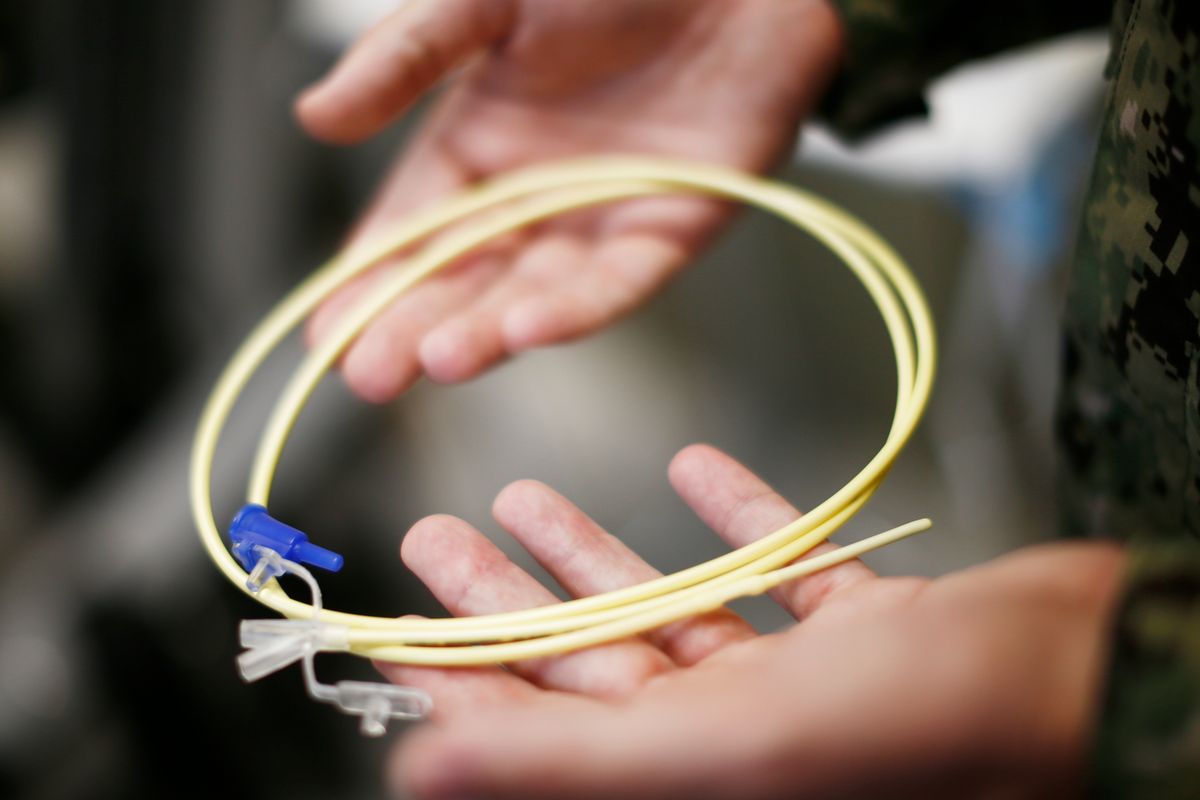 In this Nov. 20, 2013, file photo, reviewed by the U.S. military, U.S. Navy medical personnel displays an enteral feeding tube, used for force-feeding detainees, during a tour of the detainee hospital at Guantanamo Bay Naval Base, Cuba. Guantanamo prisoner, 43-year-old Abu Wael Dhiab has been engaged in a tense struggle with guards in recent months during 2014, according to documents filed in federal court in Washington, where Dhiab, who has been fed by through a nasal tube to prevent starvation, is challenging some of the tactics used by the military to deal with prisoners on hunger strike. (AP/Charles Dharapak)
--

This July, a Navy nurse refused to force-feed prisoners at Guantánamo Bay, and asked to be assigned to other duties. The move was described as "the first known rebellion against Guantánamo's force-feeding policy" and prompted an internal inquiry. The nurse could be discharged from military service. Now, as prominent medical groups come out in favor of the officer's decision, the debate surrounding medical professionals' participation in the practice has been reignited.

The World Medical Association spoke out against the practice of force-feeding, while the American Medical Association called it a violation of "core ethical values of the medical profession," and that "every competent patient has the right to refuse medical intervention."

Now, the American Nurses Association has taken a public stance on the issue, by releasing private letters sent last month to Defense Secretary Chuck Hagel, in which they argue that the investigation violated "the ethical right of a professional nurse to make an independent judgment about whether he or she should participate in this or any other such activity."

In general, health professionals believe that competent patients should be allowed to refuse medical intervention, even if that intervention would save their own lives. ANA’s official Code Of Ethics stipulates that nurses should be able to make their own independent judgment about these issues.

The ANA’s stance refocuses the spotlight on what has been an extremely controversial practice within Guantanamo Bay during prisoners’ 18-month-longhunger strike. Detainees there have described the process of being force-fed through a tube as “painful.” One prisoner said it feels like having a razor blade shoved down your throat. Top Democrat lawmakers have called for an end to the practice, which they say may be considered a form of torture.

Aside from the ethical debate, the future of the unidentified nurse remains very much in question. In an interview with NPR, the nurse's lawyer, Ron Meister, spoke of the potential ramifications of his client being discharged from the military after serving 18 years: "Aside from the psychological ramifications of having devoted his principal career to being in the Navy, to having served 10 years in submarines - very credibly - to being sent by the Navy to obtain a nurse's degree and having served in various capacities as a nurse, aside from the importance of that and, basically, invalidating his entire professional career, he would - if he doesn't get to 20 years of active duty - lose any entitlement to a pension."