A fiery Jennifer Lawrence switches sides, but remains a propaganda symbol, in a thrilling penultimate chapter 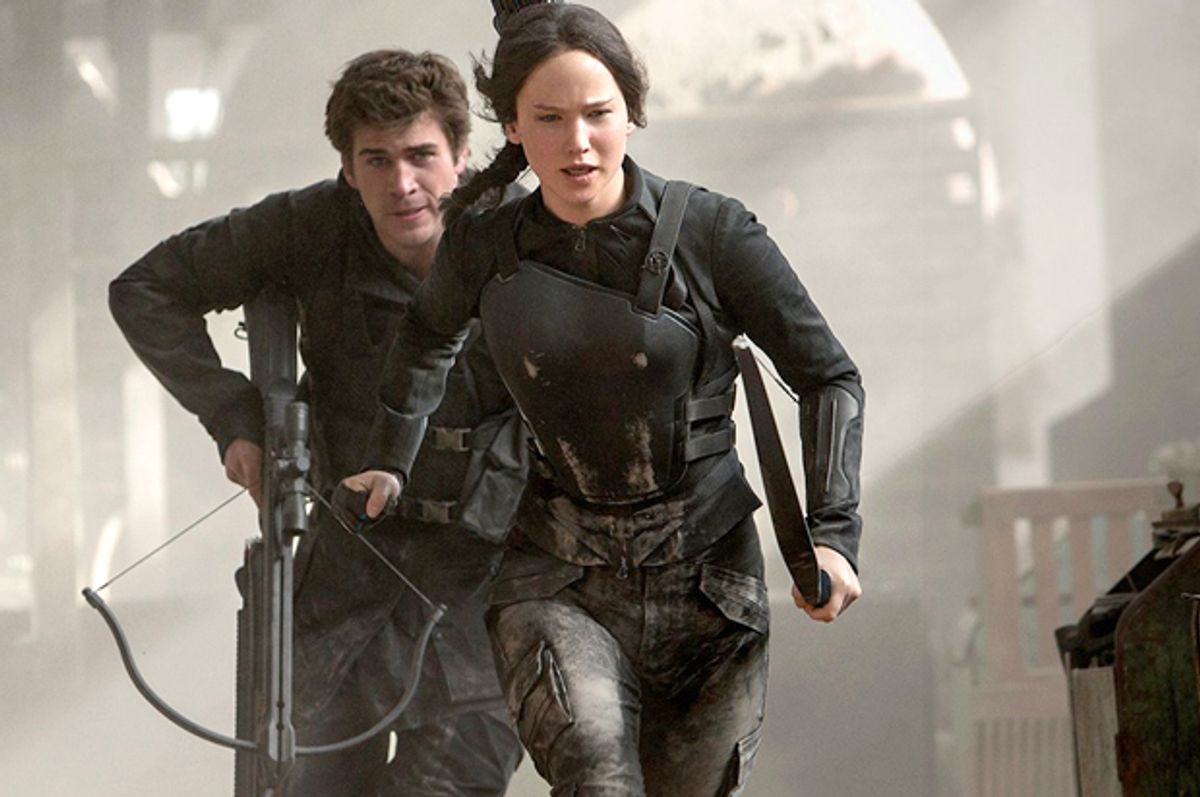 Revolutions are utopian and almost always lead to terrible consequences; human history is largely a story of tragedy, defeat and delusion. That appears to be the surprisingly bleak philosophical direction of the “Hunger Games” tetralogy, at least as we reach the three-quarter pole with “The Hunger Games: Mockingjay – Part 1,” which is certain to be one of the fall’s and the year’s biggest hits. But whether I’ve cracked the political code of Suzanne Collins’ bestselling young-adult novels and the hugely successful movie franchise -- essentially, I read Collins as a Burkean conservative, not a radical of either the right or the left – is certain to be a matter of dispute. There are many reasons to describe “The Hunger Games” as a work of calculated genius, but one reason is that its parable of Empire and Resistance feels relevant without being specific, and appeals equally to anarchists and Tea Partyers. (For this chapter, and the next one, the screenplay is by Peter Craig and Danny Strong, based on an adaptation written by Collins herself.)

But let’s set aside the heavy lifting for a sec and acknowledge that for most of “Mockingjay’s” target audience, those questions don’t much matter. This is a classic story of an adolescent pulling away from her elders and asserting her identity; if this particular adolescent is a combo of Joan of Arc and the goddess Artemis, who is tough as nails, can bring down a fighter plane with a bow and arrow and looks amazing in a skin-tight outfit, so much the better. I was all prepared to tell you that “Hunger Games” star Jennifer Lawrence and director Francis Lawrence (no relation) had gone over the top into inflated melodrama this time out, but it simply isn’t true. “Mockingjay – Part 1” is a penultimate chapter without a real ending, but it’s also a thrilling ride full of potent emotions, new characters and major twists of fate, built around another commanding star performance. Of all the big-budget popcorn movies of 2014, this one holds the screen with the least requirement for apology and speaks to the broadest possible audience.

This is the first of the “Hunger Games” movies not to feature an extended central episode set inside the Hunger Games competition, which Katniss Everdeen, the hero-turned-rebel played by Jennifer Lawrence, destroyed at the end of “Catching Fire.” I suppose potential viewers for “Mockingjay” divide into two groups: Those who want to know almost nothing about what happens, and those who have it all memorized already. Let’s keep it basic: Katniss and a few other Games contestants, including techno-nerd Beetee (Jeffrey Wright) and third-string young hunk Finnick Odair (Sam Claflin), were rescued by a rebel military alliance housed in an underground compound in District 13, previously thought to have been destroyed long ago. So, yeah, it’s a little bit “The Empire Strikes Back” and a whole lot “The Matrix Reloaded,” but without the cute robots or Billy Dee Williams or the rave scenes.

These rebels have been fighting a virtuous struggle for years against the tyrannical rule of President Snow (Donald Sutherland) and the Louis XIV decadence of his Capitol. (I’m sorry to do this, but: A capitol is a building, Ms. Collins. A city can only be a capital.) They want Katniss to serve as their revolutionary symbol, or Mockingjay, in a series of vérité-style propaganda videos, and when she sees the scale of genocidal, scorched-earth warfare Snow has been waging against the Districts, she is happy to oblige. Francis Lawrence manages these ambiguous and troubling scenes with terrific skill: There is nothing phony about Katniss’ anguish when confronted with Nazi-like atrocities, or about her passionate hatred for the Capitol. But it’s also being packaged and manipulated toward uncertain ends. There is certainly a difference between Katniss’ “propos” and the anti-rebellion interviews her onetime boyfriend and teammate, Peeta Mullark (Josh Hutcherson), is doing for Capitol TV with radioactive Hunger Games host Caesar Flickerman (Stanley Tucci). But is the difference fundamental, or only a matter of degree?

The embattled and isolated rebels have built their own cult of personality around icy, rational President Alma Coin (Julianne Moore, the splashiest addition to this cast) and emanate a general vibe of jumpsuited conformity that is not entirely reassuring. Katniss’ old pal and Hunger Games mentor Haymitch (Woody Harrelson) is here to play a cameo role in the revolution – but cold sober, since Coin’s regime is strictly prohibitionist. Former game designer Plutarch Heavensbee, now Coin’s right-hand man, is still the same canny, untrustworthy operator as ever – and, yeah, Plutarch is played by Philip Seymour Hoffman, and I was surprised how painful it was to see him on-screen one more time. It’s a terrifically slippery role to go out with, at least. (Capitol fashion maven Effie Trinket, marvelously played by Elizabeth Banks, has been dragged into the revolutionary cause as well, but she can't do anything about those jumpsuits.)

So just to oversimplify a tad, we’ve got the Roman Empire on one side and the Khmer Rouge on the other – with one badass teenage girl in the middle, stuck between two boyfriends. Much of “Mockingjay – Part 1,” especially its latter sections, are concerned with assembling the pieces for the forthcoming final chapter: Katniss pines for Peeta, who is evidently being tortured in the Capitol, and mostly ignores Gale (Liam Hemsworth), the macho hunter-warrior type whose only pathway out of the Friend Zone requires considerable pain and suffering. Coin and Snow are locked in a murky strategic game of attack and counterattack, where it’s not clear who is leading and who following, or even which of them is finally more despicable.

I brought up Edmund Burke earlier because he drew an important philosophical line in the sand between the American Revolution, which he supported, and the subsequent French Revolution, which he despised. No doubt that’s inflating the coherence of the “Hunger Games” universe quite a bit, since it’s more like a combination of Burke’s aristocratic Whig caution and the humanist idealism of Jean-Jacques Rousseau, a major Burke adversary. We’ll have to see how Francis Lawrence and his team handle Collins’ violent and explosive final chapter, which delivers several different kinds of endings. (The second half of “Mockingjay” is still a full year away.) If this all adds up to a subtly self-sabotaging fable of rebellion that foregrounds the individual over the community, as I strongly suspect, that’s hardly a surprise. As a work of potent, ambivalent and open-ended pop spectacle, it’s first-rate.