"How to Get Away With Murder" and "Scandal" end with a bang: The most riveting power struggles on TV

The two shows had back-to-back midseason finales last night, and both were full of complication and manipulation 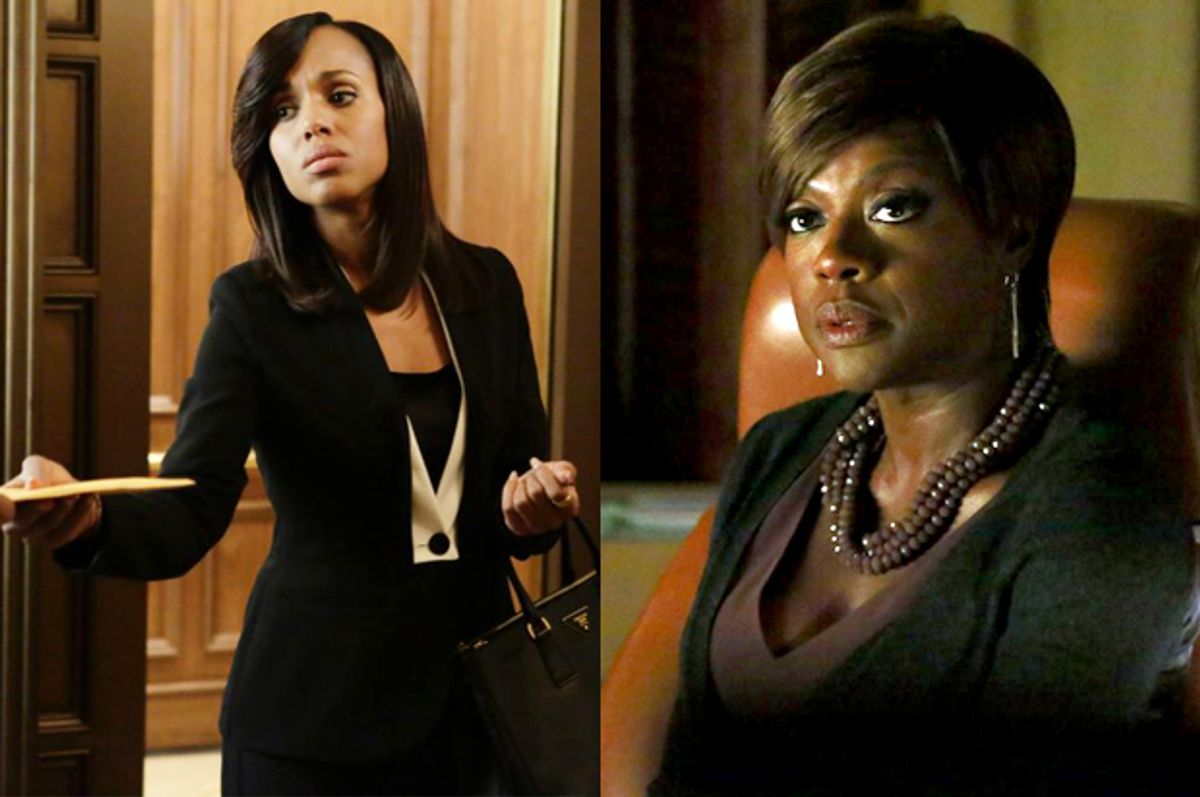 Kerry Washington in "Scandal"; Viola Davis in "How to Get Away with Murder" (ABC)
--

The bloody, splashy opera that is “Scandal” came to a careening pause last night, as the first half of the season ended with the knowledge that Olivia Pope has been kidnapped, to be used as a bargaining chip against the president for something something West Angola? (Oh, who really cares what the plot is about.) It’s been a weird, rocky season for “Scandal” so far, as it’s tried to recover from a mediocre third season while finding new drama.

Surprisingly, “Scandal” has found a way to make it work. It’s never going to be a totally thoughtful show, but it’s always interesting — almost too interesting. So much action is packed into “Where the Sun Won’t Shine” that the commercial breaks feel like much-needed timeouts built into an hour-long sprint. Cyrus resigns, unresigns, decides to get married to the sex worker who made him resign in the first place. Mellie threatens to destroy Elizabeth North, and not just because they’re both sleeping with the same man; Mellie’s husband, Fitz, is threatened by that same man, but about something totally unrelated to adultery (I told you, something something West Angola). And Quinn and Charlie …  actually, you know what, who cares about Quinn and Charlie.

But the real story is always Olivia’s, and ever since the end of the second season, the real story of “Scandal” has been the reckoning between Olivia and her two very intense parents, Rowan and Maya (played by Joe Morton and Khandi Alexander, respectively). Because there is no sense of, for lack of a better word, chill in this show, Olivia, Rowan and Maya are all trying to kill each other at all times — and though no one has succeeded yet, all of the attempts tend to give way to a type of self-centered monologue that no one really does in real life but everyone secretly wishes they could, if they could find the words. Morton is especially fantastic at dressing-down, directing his ire at whoever crosses his path of purpose.

Olivia’s spats with her parents — and with her lovers, who are both white men — are never accidental. “Scandal” is such a high-strung drama that everything that happens in the story is mostly happening just for emotional resonance. Olivia’s fraught, brutal relationship with Fitz, the arguable love of her life, is the show’s canvas for trying to portray the intimate horror of race relations in America. Her parents — and especially her father — are stand-ins for Olivia’s own doubts and demons. Rowan is always reminding her that she’s not like them, she’s black: She has to be twice as good to go half as far; she can’t trust white men; she can’t turn her back on family. It’s an injustice that so deeply rankles Olivia that it’s transformed her from a crusader to the president’s hired gun; in her insistence on proving that it’s all the same for her, she’s making a deal with the devil.

In last night’s episode, the almost unbelievable happened: Olivia pulled a gun on her father, and then pulled the trigger. It wasn’t loaded. Rowan’s not dead. But she would have. Just before, he accused her of calling in her “clan of good ol’ boys” to deal with him — a phrase so loaded with racial subtext that it explodes into the room. He’s brought a gun, which he’s put on the table. And Olivia picks it up and pulls the trigger.

It was all a trap — his way of manipulating her to do the unspeakable, by saying the unspeakable. But what resonates about the moment with the gun is that we’ve seen it once before. Just minutes before, in fact, when one of her boyfriends (it’s complicated) gives her a gun and confirms that she knows how to use it.

Olivia’s never handled a gun before this episode. Up until now, a purposeful detail to her character has been that she isn’t a physically threatening person. Kerry Washington is tiny, and as Olivia she’s often dressed in clothing that emphasizes her smallness. Olivia doesn’t solve problems with force. She doesn’t throw punches, she doesn’t call in the guards, she doesn’t have a pair of handcuffs on her belt. And she certainly doesn’t have a gun. Olivia has handled everything that has come her way with the power of persuasion and force of will.

And then Jake, played by Scott Foley, gives her a gun and walks her through using it, and it’s sort of like the character is transformed. Olivia almost doesn’t know who she is, and for the viewer, it’s hard to recognize her, pointing a barrel at the fourth wall. There’s something rather coded about the nicest white man in the show giving the black female protagonist a weapon of incredible power, and making sure that she knows how to use it, so that when that woman is faced with the man who raised her, she knows how to pull the trigger. Rowan’s not a good guy; Jake isn’t a bad guy. But it’s never not complicated, is what “Scandal” is always trying to say. It’s never just black-and-white.

The struggles of power and complication also permeate the frames of “How to Get Away With Murder,” a show that is structurally quite different from “Scandal,” but operates on the same dramatic fever pitch. (Shonda Rhimes executive produces both shows, but where “Scandal” is all her own, “How to Get Away With Murder” is created and run by Peter Nowalk, who is, by the way, a white man.) “How to Get Away With Murder” has only had half of a season to work up the same frenzy that “Scandal” wields, so the emotional impact of the story doesn’t land quite as much, in these early days. But where the story still works to find traction, the cast succeeds admirably — at least in its protagonist, the incomparable Viola Davis. In last night’s midseason finale for that show, titled “Kill Me, Kill Me, Kill Me,” Davis’ Annalise Keating is calculating, contrite, victimizer, victimized, and full of righteous rage, and she moves from one to the other with extraordinary fluidity.

There’s something significantly less operatic about “How to Get Away With Murder” — maybe it’s a distinct lack of monologuing — and this makes Davis’ riveting performance as Annalise the emotional lightning rod of the show. Other characters have feelings, but Annalise’s are the only ones that matter — a fact that's abundantly clear to her students and employees, who live and die on her every word. And as the closing minutes of “Kill Me, Kill Me, Kill Me” reveal that Sam’s death might not have been by Annalise’s hand, but was certainly of Annalise’s doing, it becomes more and more obvious that Annalise is quite the opposite of the well-meaning, physically retiring Olivia Pope: Annalise is tall, built and difficult to ignore, in every frame she’s in. Alessandra Stanley went out of her way to call Viola Davis not “classically beautiful,” which is, of course, nonsense. But Davis is for sure an unconventional heroine in other ways — she’s powerful, she’s imposing, and she’s not even the good guy, most of the time. Yet you still want her to win. I want her to win. Because the kind of power she wields is utterly entrancing.

There is one last piece to “How to Get Away With Murder”: the body. The show has spent the first half of its first season building up to the truth of what happened to Annalise’s husband, Sam (Tom Verica). As in “Scandal,” the main character, a black woman, is embroiled in a messy and at times outright abusive relationship with a white man. In “Scandal,” you can feel Fitz and Olivia’s love for each other, even when they’re hurting each other. In “How to Get Away With Murder,” there’s no love, just barely veiled animosity. In last night’s episode, Sam spits vitriol at Annalise, telling her he only ended up with her because she looked like an easy lay. They flail at each other; Annalise says Sam isn’t the man she fell in love with, and then says: “Kill me. Just kill me.” There are oceans of depth to Annalise — and vast reaches of power, too. And in that moment she’s stripped bare of them, for just an instant.

Sam doesn’t kill her. But with Annalise’s tacit approval, her student Wes (Alfred Enoch) kills Sam. And then with the help of a group of her students, they dispose of the body and get rid of the evidence. The corpse is a straight white man. The perp is a straight black man. And a coalition of interested parties — a black woman, a Latina woman, a mixed-race woman and a gay white man — team up to protect not the former, but the latter. A satisfying story? A fairy tale? A commentary on recent news? Just how far-fetched is it? And what could possibly happen next?